The key facts about family breakdown and fatherlessness in the UK.

We Are Fathers4Justice – The Official Campaign Organisation » About F4J » Fact Sheet 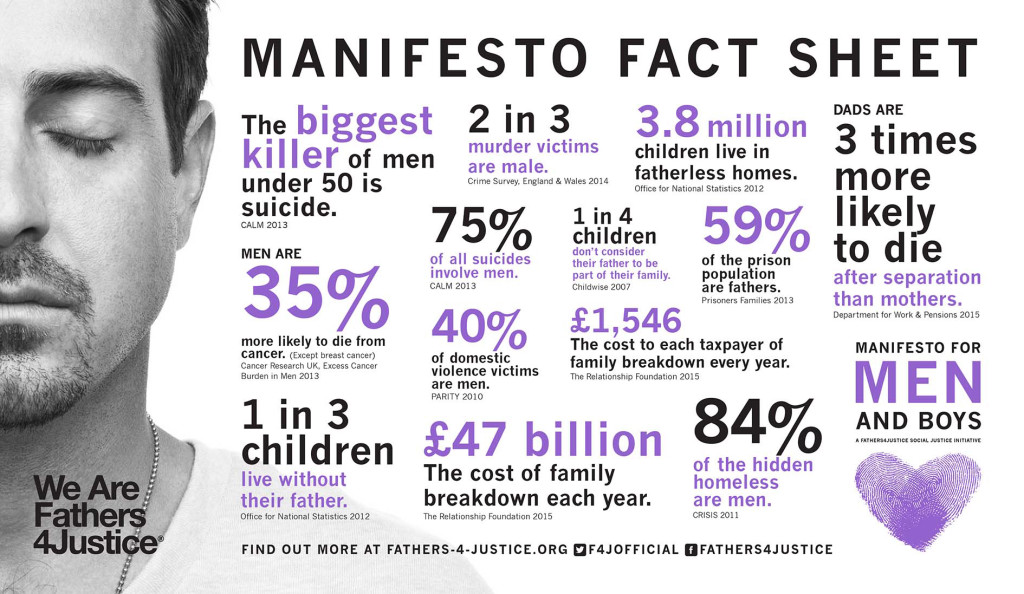 “A generation of children have been denied their human right to a meaningful and loving relationship with their fathers”
Matt O’Connor, Founder, Fathers4Justice
200 children
lose contact with their fathers every day in secret courts.
(Fathers4Justice)
1 in 3
children live without their father.
(Office of National Statistics)
3.8 million
Nearly 4 million children are fatherless in the UK.
(Office of National Statistics)
£44 billion
is the cost of family breakdown every year.
(The Marriage Foundation)

1. Denied a right to family life

Our rights as parents to family life have been repeatedly beached in the UK courts. The role of government should be to protect families. Instead it has been instrumental in breaking them up.

“You cannot separate a child’s right from its parents rights. A child’s rights can only be exercised through it’s parents.”
Nadine O’Connor, Campaign Director, Fathers4Justice

2. The removal of fathers in legislation – A nation of second class parents

Successive governments have deliberately removed the need for a father legally, emotionally and biologically through legislation. We now have a generation of socially engineered fatherless families. After the death penalty, the removal of children from their parents is the most draconian action the state can take.

“How can any reasonable minded person really accept that over 90% of fathers are unfit to share in the parenting of their children?”

“A dad is for love, not just child support.”

Our government, children services and family justice system have a history of failing our most vulnerable. From Victoria Climbie to Baby Peter Connolly whose father was denied access to him on the basis of false allegations, the Dickensian treatment of children continues unchecked. Child welfare professionals claim to ‘act in the child’s best interests’ despite having kept no records on the outcome for the children they have been responsible for. The result has been an explosion in anti-social behaviour, gang culture and children having children on the streets of our country.

“The family courts have reduced parents to legalised cage fighting.”

5. Britain in breakdown – The economic cost

The cost of mass fatherlessness and the ensuing social consequences are catastrophic for our country socially and economically. Family breakdown drives families into grinding poverty with the worst possible outcomes for our children.

6. The family courts in breakdown

An ideologically driven industry has been built around the separation of children from their parents. The family justice system is predicated on maximum conflict and minimum resolution. Courts are for criminals, not families, yet they remain impermeable to reason or change of the system for the benefit of families and most importantly children. The public can have no confidence whatsoever in the operations of secret family courts which are above scrutiny and transparency.

“Courts are for criminals, not families.”

7. The Stalinesque secrecy of the family courts

Closed courts mean that there is no independent audit of family court activities; no appraisal of judges, no assessment of the judgements made, of court process, of delays, or of the involvement of CAFCASS. As no records are kept, no evaluation can be made. Without evaluation what are judgments based on? No assessment is ever made of the effect of family court intervention on a child or his family. Secrecy is often excused on the grounds that children will be psychologically traumatised by media exposure, there is not a shred of empirical evidence to support this; it is based on supposition and is in Mr Justice Munby’s words, “in significant measure speculative” (Norfolk County Council v Nicola Webster and 5 Others, 2006). The suffocating secrecy of the family courts prevents transparency and scrutiny of the system and threatens parents with prison if they go public about miscarriages of justice.

“The single biggest social problem in our society may be the growing absence of fathers from their children’s homes, because it contributes to so many other social problems.”
President Clinton, 1995, quoted by Stephen Baskerville, PhD, in The Politics of Fatherhood, 8 December 2002

Fathers4Justice believes child support should mean emotional and financial support of our children. However, consecutive governments have continued to portray fathers as ‘feckless’ or ‘deadbeats’ and reduced them to the status of cashpoints. The reality is that without equal rights and responsibilities for fathers, the child support system is doomed to failure even as the government prepares to replace the CSA with a new Child Maintenance Service. As the law stands, a father can abandon his children tomorrow, provided he pays.

“Labelling dads as deadbeats is lazy, ignorant and offensive stereotyping. Lets give the good mum and dads the acknowledgement and support they need and give the lousy mums and dads the consequences they deserve.”

Underlying social dynamics coupled with a taxation system that incentivises single parenting are changing the fabric of family relationships. Yet marriage remains the securest and most beneficial environment for children. As a result, taxpayers are left subsidising single parenthood and fatherless families which result in the worst outcomes for our children and country. F4J supports marriage and believes that successive governments have discriminated against married couples through the tax system with traditional families paying more tax in Britain than in any other developed country.

Despite being the largest equal parenting campaign group in the world consecutive governments have chosen to exclude Fathers4Justice from the democratic process and deny the 35,000 families we represent a voice in government. This lack of representation is an affront to democracy and fundamentally undermines the legitimacy of the reform process.

“The government opposes equality, supports secrecy and has rejected transparency. It is allowing an appalling regime to continue to operate behind closed doors where, like most child abuse, it can continue unchecked.”

11. Political outcasts – How Fathers4Justice has been excluded

Despite being the largest equal parenting campaign group in the world and the third highest supported campaign group in the UK* behind Greenpeace and Amnesty International, consecutive governments have chosen to exclude Fathers4Justice from the democratic process and deny the 35,000 families we represent a voice in government. The denial of representation to Fathers4Justice by successive committees, working parties and hearings is an affront to democracy. The parents and children who have been silenced behind the closed doors of secret courts have been silenced again by the very people who are supposed to represent them. *Conservative Party Polling, 2011

“How much money do we spend every year trying to address social problems – crime, drug and alcohol abuse, boy’s educational difficulties, teen pregnancy etc – that fathers themselves could hugely ameliorate? The reasons to keep fathers in children’s lives are overwhelming.”

Firstly the government did not need a report to tell it what it already knew and what it had promised to change in pre-election promises made to Fathers4Justice in 2010. However, the government reneged on those promises and demonstrated a fundamental lack of moral courage confirming what Ian Duncan-Smith had told F4J in 2010, that it was ‘political suicide’ for anyone to take this issue on in Parliament.

In June 2012, the government offered four different approaches to ‘strengthen shared parenting’ by amending section 1 of the Children Act 1989 in order to meet the Government’s objectives set out in paragraphs 4.1 to 4.6.The Government’s feeble cocktail of proposals is a charter for conflict and fatherlessness. Even after 10 years of campaigning, fathers have been deemed so unimportant to children to even merit a single line in a statute assuring their full participation in the lives of their children post-divorce or separation. A Bill which cannot even mention the word ‘father’ has no serious value or meaning.

Fathers4Justice has rejected the coalition governments proposals on shared parenting for the following reasons:

“The government is content, somehow, for the status quo to remain. It does not use the language of outrage or urgency, but uses language spoken with the ears of vested interests in mind. It has excluded parents from the panel as the system excludes parents from the process and it’s vision is filtered through the distorted prism of public law where decisions are made on behalf of children by politicised and ideologically driven organisations.”
“If divorce is like a burning house then going into the family courts is like emptying a plane-load of napalm onto the situation.”