The Patron Saint of Stolen Children, by Matt O’Connor. 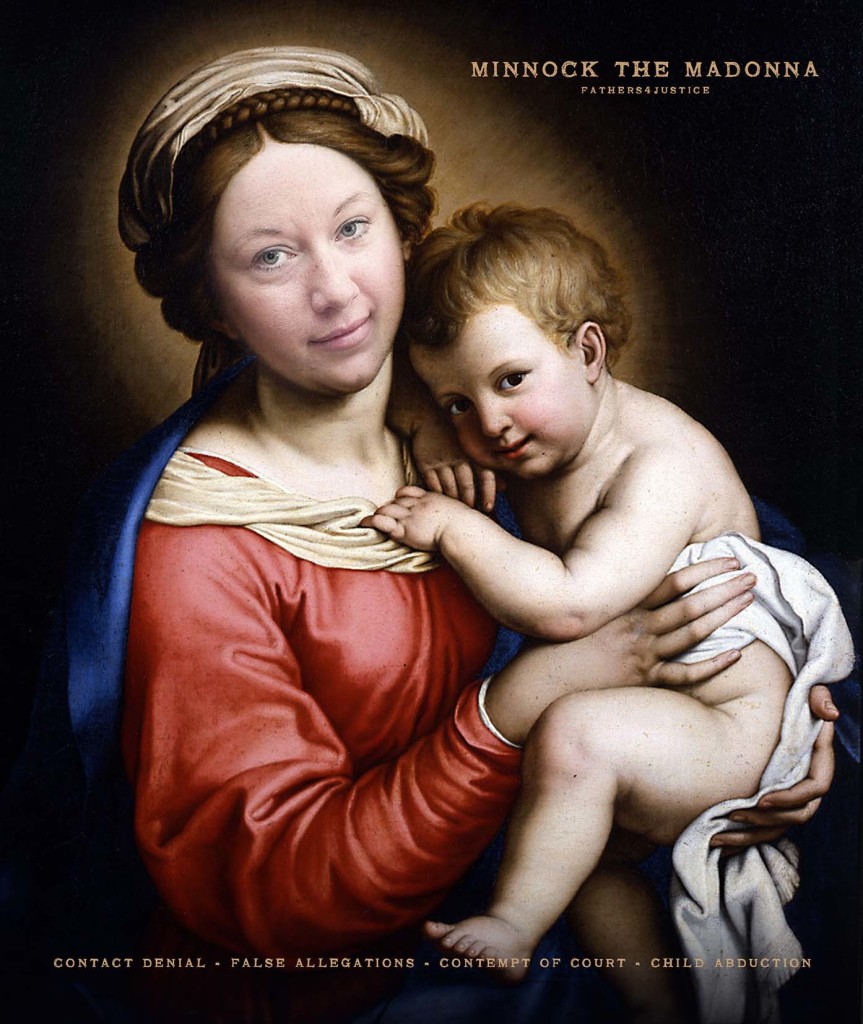 By Friday evening the Deification of Rebecca Minnock was complete. Where the Police and Court tipstaff couldn’t find a mum on the run, a newspaper with a cheque book could.

In an ‘EXCLUSIVE’ interview and photoshoot with the Daily Mail, Minnock paraded her reasons for ‘fleeing’ with her son, whilst the Mail claimed the glory for ‘persuading her to contact police’.

After all, why let a good story get in the way of informing the police first where a child abductor was and letting the father know his son was safe, when there was a story to sell.

Police said Minnock and her son would now receive the ‘support they needed’ and that no arrest had been made for kidnapping or child abduction, despite this being one of highest profile child abduction cases in recent times, running for 17 days in the full glare of the media spotlight.

Police washed their hands of the matter with the words “This will be a matter for the family courts now…she is a good mother who had her child’s best interests at heart”, before chauffeuring Minnock home in a police car.

I’m sure the next father arrested for returning his son back late from a contact visit will be reassured to hear that.

The lexicon of double standards in such cases now runs as follows:

And you thought sex discrimination was illegal.

Contrast the treatment of Rebecca Minnock with that of Simon Clayton.

Back in 2003, Simon Clayton took his young daughter Esti to Portugal on an unauthorised holiday where he was hunted down by a squad of armed Police and arrested face down at gun-point on a beach in front of Esti. He then spent 40 plus days rotting in a Portuguese prison cell while Fathers4Justice tried to get him out.

He was given a nine-month prison sentence in 2003 as a result. http://www.walesonline.co.uk/news/wales-news/accused-father-tells-jail-hell-2476978

So much for gender equality.

On social media, legions of Rebecca Minnock supporters, flushed with outrage, argued that she had done ‘the right thing’ and was ‘desperate’. They claimed that mums had a ‘supernatural primal bond’ with their children that justified contact denial, false allegations, contempt of court and child abduction.

They told us there was one rule for the deity of motherhood, and another for the fatherhood.

It’s as shocking as it is illustrative, that so many mothers think contact denial is not a hate crime, or form of child abuse, but simply an extension of a ‘mothers’ rights’.

In doing so, they have inadvertently exposed a society suffering from a deep-rooted, anti-father, gender apartheid. Like under the counter racism, it only surfaces on rare occasions like this. Witness the outpouring of sympathy for ONE child abductor, and contrast that with the treatment meted out to fathers in 98% of family court cases – dads who place their faith in the rule of law, for pitiful reward.

What would Rebecca Minnock say to them? That tens of thousands of desperate dads should copy her example and abduct their children? Minnock said she feared never seeing her boy again, though she had no problem about making false allegations to make sure his father never saw him again.

Rebecca Minnock would do well to remember that on the destructive hamster wheel of family law, what goes around, inevitably comes around. As a mother to a son, it is a statistical possibility that one day the tables will be turned, and she too will become a victim, a grandmother struggling to see her grandchildren. What a cruel irony that would be.

If all this publicity leads to no punitive consequences for Rebecca Minnock, it will make a mockery of our idea of justice and give a licence to mothers who want to deny children access to their dads, with impunity.

The one positive in this case is that it has shone a light into the dark recesses of our brutal, cruel and secretive family justice system, where parents like Rebecca Minnock and Roger Williams have been reduced to legalised cage fighting, where everyone loses, especially their young son Ethan.

The paradox of this tragic abduction, is that the extremes parents are driven to, for fear of losing their children in this ‘winner takes all’ justice system, might just be the best argument for Shared Parenting yet.