Shropshire Star: One man’s fight to bring justice for fathers 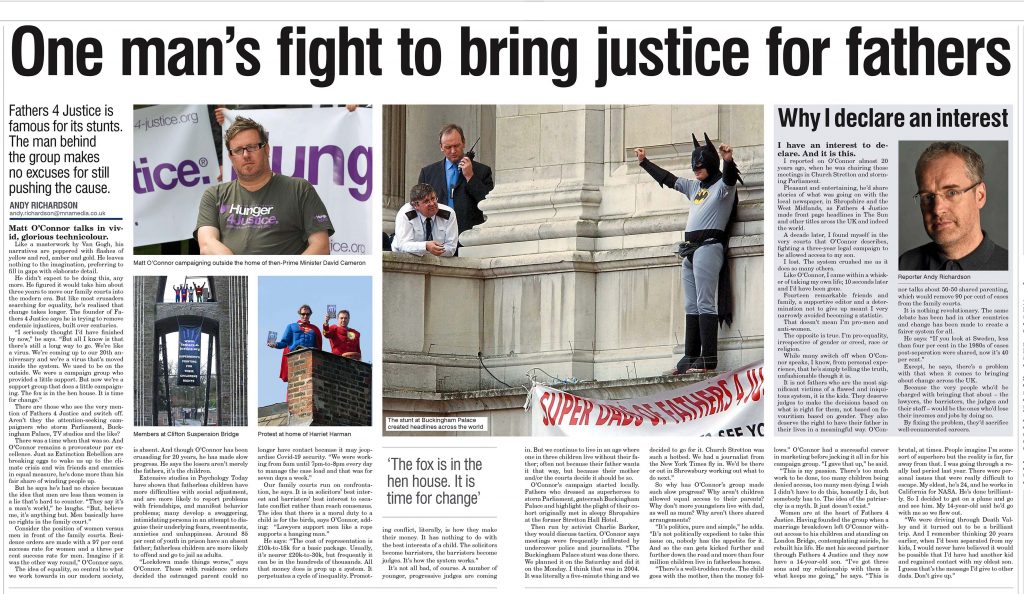 Fathers4Justice is famous for its stunts. The man behind the group makes no excuses for still pushing the cause. By Andy Richardson.

Matt O’Connor talks in vivid, glorious technicolour. Like a masterwork by Van Gogh, his narratives are peppered with flashes of yellow and red, amber and gold. He leaves nothing to the imagination, preferring to fill in gaps with elaborate detail.

He didn’t expect to be doing this, any more. He figured it would take him about three years to move our family courts into the modern era. But like most crusaders searching for equality, he’s realised that change takes longer. The founder of Fathers 4 Justice says he is trying to remove endemic injustices, built over centuries.

“I seriously thought I’d have finished by now,” he says. “But all I know is that there’s still a long way to go. We’re like a virus. We’re coming up to our 20th anniversary and we’re a virus that’s moved inside the system. We used to be on the outside. We were a campaign group who provided a little support. But now we’re a support group that does a little campaigning. The fox is in the hen house. It is time for change.”

There are those who see the very mention of Fathers 4 Justice and switch off. Aren’t they the attention-seeking campaigners who storm Parliament, Buckingham Palace, TV studios and the like?

There was a time when that was so. And O’Connor remains a provocateur par excellence. Just as Extinction Rebellion are breaking eggs to wake us up to the climate crisis and win friends and enemies in equal measure, he’s done more than his fair share of winding people up.

But he says he’s had no choice because the idea that men are less than women is a lie that’s hard to counter. “They say it’s a man’s world,” he laughs. “But, believe me, it’s anything but. Men basically have no rights in the family court.”

The idea of equality, so central to what we work towards in our modern society, is absent. And though O’Connor has been crusading for 20 years, he has made slow progress. He says the losers aren’t merely the fathers, it’s the children.

Extensive studies in Psychology Today have shown that fatherless children have more difficulties with social adjustment, and are more likely to report problems with friendships, and manifest behavior problems; many develop a swaggering, intimidating persona in an attempt to disguise their underlying fears, resentments, anxieties and unhappiness. Around 85 per cent of youth in prison have an absent father; fatherless children are more likely to offend and go to jail as adults.

“Lockdown made things worse,” says O’Connor. Those with residence orders decided the estranged parent could no longer have contact because it may jeopardise Covid-19 security. “We were working from 5am until 7pm-to-8pm every day to manage the case load and that was for seven days a week.”

Our family courts run on confrontation, he says. It is in solicitors’ best interest and barristers’ best interest to escalate conflict rather than reach consensus. The idea that there is a moral duty to a child is for the birds, says O’Connor, adding: “Lawyers support men like a rope supports a hanging man.”

He says: “The cost of representation is £10k-to-15k for a basic package. Usually, it’s nearer £20k-to-30k, but frequently it can be in the hundreds of thousands. All that money does is prop up a system. It perpetuates a cycle of inequality. Promoting conflict, literally, is how they make their money. It has nothing to do with the best interests of a child. The solicitors become barristers, the barristers become judges. It’s how the system works.”

It’s not all bad, of course. A number of younger, progressive judges are coming in. But we continue to live in an age where one in three children live without their father; often not because their father wants it that way, but because their mother and/or the courts decide it should be so.

O’Connor’s campaign started locally. Fathers who dressed as superheroes to storm Parliament, gatecrash Buckingham Palace and highlight the plight of their cohort originally met in sleepy Shropshire at the former Stretton Hall Hotel.

Then run by activist Charlie Barker, they would discuss tactics. O’Connor says meetings were frequently infiltrated by undercover police and journalists. “The Buckingham Palace stunt was done there. We planned it on the Saturday and did it on the Monday. I think that was in 2004. It was literally a five-minute thing and we decided to go for it. Church Stretton was such a hotbed. We had a journalist from the New York Times fly in. We’d be there or out in Shrewsbury working out what to do next.”

So why has O’Connor’s group made such slow progress? Why aren’t children allowed equal access to their parents? Why don’t more youngsters live with dad, as well as mum? Why aren’t there shared arrangements?

“It’s politics, pure and simple,” he adds. “It’s not politically expedient to take this issue on, nobody has the appetite for it. And so the can gets kicked further and further down the road and more than four million children live in fatherless homes.

“There’s a well-trodden route. The child goes with the mother, then the money follows.” O’Connor had a successful career in marketing before jacking it all in for his campaign group. “I gave that up,” he said.

“This is my passion. There’s too much work to be done, too many children being denied access, too many men dying. I wish I didn’t have to do this, honestly I do, but somebody has to. The idea of the patriarchy is a myth. It just doesn’t exist.”

Women are at the heart of Fathers 4 Justice. Having founded the group when a marriage breakdown left O’Connor without access to his children and standing on London Bridge, contemplating suicide, he rebuilt his life. He met his second partner through Fathers 4 Justice and they now have a 14-year-old son. “I’ve got three sons and my relationship with them is what keeps me going,” he says. “This is brutal, at times. People imagine I’m some sort of superhero but the reality is far, far away from that. I was going through a really bad period last year. There were personal issues that were really difficult to escape. My eldest, he’s 24, and he works in California for NASA. He’s done brilliantly. So I decided to get on a plane and go and see him. My 14-year-old said he’d go with me so we flew out.

“We were driving through Death Valley and it turned out to be a brilliant trip. And I remember thinking 20 years earlier, when I’d been separated from my kids, I would never have believed it would be possible that I’d have had another kid and regained contact with my oldest son. I guess that’s the message I’d give to other dads. Don’t give up.”

WHY I DECLARE AN INTEREST

I have an interest to declare. And it is this.

I reported on O’Connor almost 20 years ago, when he was chairing those meetings in Church Stretton and storming Parliament.

Pleasant and entertaining, he’d share stories of what was going on with the local newspaper, in Shropshire and the West Midlands, as Fathers 4 Justice made front page headlines in The Sun and other titles aross the UK and indeed the world.

A decade later, I found myself in the very courts that O’Connor describes, fighting a three-year legal campaign to be allowed access to my son.

I lost. The system crushed me as it does so many others.

Like O’Connor, I came within a whisker of taking my own life; 10 seconds later and I’d have been gone.

Fourteen remarkable friends and family, a supportive editor and a determination not to give up meant I very narrowly avoided becoming a statistic.

The opposite is true. I’m pro-equality, irrespective of gender or creed, race or religion.

While many switch off when O’Connor speaks, I know, from personal experience, that he’s simply telling the truth, unfashionable though it is.

It is not fathers who are the most significant victims of a flawed and iniquitous system, it is the kids. They deserve judges to make the decisions based on what is right for them, not based on favouritism based on gender. They also deserve the right to have their father in their lives in a meaningful way. O’Connor talks about 50-50 shared parenting, which would remove 90 per cent of cases from the family courts.

It is nothing revolutionary. The same debate has been had in other countries and change has been made to create a fairer system for all.

He says: “If you look at Sweden, less than four per cent in the 1980s of cases post-separation were shared, now it’s 40 per cent.”

Except, he says, there’s a problem with that when it comes to bringing about change across the UK.

Because the very people who’d be charged with bringing that about – the lawyers, the barristers, the judges and their staff – would be the ones who’d lose their incomes and jobs by doing so.