Fatherphobia and the Everyday Sexism of Mother Superior

Let’s imagine the pre-Christmas scene at the Guardian HQ.

The festive season is a particularly painful time of year for separated fathers, so wouldn’t it be good if we as a responsible, campaigning newspaper, covered their plight and the pain felt by hundreds of thousands of families this Christmas.

Now imagine for a moment that in every article you ever read about fatherlessness or parenting in the Guardian and other newspapers, you replaced the word ‘father’ with the word ‘black’. Or, you reversed the genders and replaced ‘mother’ with ‘father’ and vice versa.

Fatherphobia is not some fictional conceit created by an angry fathers movement, but a very real under the counter (or should we say ‘behind the laptop’) bigotry practised by both men and women.

The result is the systemic segregation and separation of children from their fathers in alarming numbers.

Anti-father bigotry and prejudice is now so ingrained in our national psyche that it has become socially acceptable and forms part of an establishment ideology that has driven hundreds and thousands of fathers from families though legislation, through social engineering and through the family courts.

This gender cleansing is not only a fundamental human rights issue and the social justice issue of our age (many will mock, but history will prove it to be true), but it has led to catastrophic outcomes for the very children we proclaim to care about.

We have the highest rate of young offending in Western Europe, the highest rate of anti-social behaviour, a pregnancy and abortion epidemic and inner cities where over 50% of the children are now fatherless. The cost to the country is £44 billion alone – more than our entire defence budget alone.

As a nation we repeatedly fail our children. From Victoria Climbie to Baby P to Daniel Pelka, the list is tragic and endless. And that is before we begin to pick away at the scabby institutionalised abuse of children and families behind closed doors in secret courts.

Sadly for those children there is no national outrage, no media expose, no shining of the light of publicity into the grubby corners of the Devil’s labyrinth that is our family justice system. The mass media has not only chosen to ignore this scandal, it has set about shaping our collective thinking through willful distortion and misrepresentation of the facts.

For example, commentator Barbara Ellen has dedicated a half page in today’s Observer (29/12/12) http://www.theguardian.com/commentisfree/2013/dec/29/fathers-4-justice-campaign-ill-conceived to smearing Fathers4Justice in pursuit of that newspaper groups ideologically driven anti-father narrative which deliberately excludes any reporting of mass fatherlessness and secret family courts. Contrast this with its slavish, fawning coverage of Pussy Riot and Femen.

Her endless capacity for everyday sexism extends to producing an article so criminally misleading and bigoted, it bears no little or no relation to the advert we produced.

Firstly, we never condemned actress Kate Winslet for her parenting arrangements. We produced a proportionate, balanced advert that addressed Winslet’s attack on 50/50 shared parenting in Vogue Magazine. It would be odd indeed if we did not comment on Ms Winslet’s comments about an issue we campaign for. To date she has refused to retract her comments which were hurtful and distressing to many fathers at a time of year when they will not see their children.

Secondly a comment piece in The Guardian on 17/10/13 attacked Ms Winslet over Mario Testino’s ‘Barbie-like’ airbrushed portrait of her. http://www.theguardian.com/commentisfree/emma-brockes-blog/2013/oct/17/kate-winslet-vogue-cover-grotesque

Later in that same article Emma Brockes goes on to say in reference to Winslet’s 50/50 comments, “It’s the kind of quote that, if you’re not careful, will land you a guy in a Spiderman suit with a Fathers 4 Justice placard on your doorstep.”

Clearly other commentators at the Guardian understood that Ms Winslet’s comments were likely to provoke a reaction.

Barbara Ellen goes on to claim that she knows best on fathers issues. She claims the campaign was ‘counterproductive’, ‘misogynistic’ and ‘disingenuous’. She conveniently airbrushes out key facts herself, omitting to mention Jim Threapleton’s on the record support for Fathers4Justice.

She then accuses Fathers4Justice of ‘cheap bullying’ and makes the extraordinary claim that ‘not one of these mothers sought to downgrade fatherhood’. Really? Did Fathers4Justice just cook these advertisements up along with turkey leftovers for a bit of festive fun?

The publicly available facts were obtained from the Guardian and other newspapers and it is clear in every instance that the mothers concerned were complicit in contact denial at one time or another which is a serious human rights violation and an abuse of a child’s right to both parents. Ellen’s role as an apologist for this sort of behaviour does not reflect well on her.

One can only conclude that like a racist Afrikaans in apartheid South Africa, she is blinded to blatant discrimination by her own prejudice. A fact reinforced when she says ‘I’d still say that the problem for many women is getting men to take responsibility’.

A bit like the Afrikaans claiming that blacks weren’t prepared to take responsibility for running their own country or that women couldn’t be trusted with the vote.

The reason why we have a duty to challenge the sexist and hurtful comments made by Ms Ellen and Ms Winslet (yes, fathers have feelings too) is because like racism, homophobia or any type of prejudice, anti-father discrimination and inequality must be challenged. Kate Winslet’s public comments are a matter of public interest and therefore a matter of debate and it is absolutely right that public figures are challenged on their views, especially those in a powerful position with a huge worldwide following.

Sending out a message of parental inequality has the power to harm many thousands of children and parents. Many mums will think, ‘If Kate does it, so can I.’

Ellen’s straw man argument is ultimately blown away by her offensive stereotyping of dads as ‘deadbeats’ and her failure to get even the most basic facts about Fathers4Justice correct; we were formed in 2001 not 2003 and F4J is not run by misogynists, but by the not so crummy mummy, mother-of-two, Nadine O’Connor.

What a shame then that the media is reduced to faux outrage, violent headlines and sycophantic concern for the sensibilities of a Hollywood star rather than the disgusting spectacle of nearly 4 millions kids living without a dad and the evisceration of fathers from families.

Kate Winslet remains on record as attacking 50/50 shared parenting and stating that the children will only live her, not their dads, but that they do have ‘lovely relationships with their dads’.

In the same way Rosa Parks was allowed to sit on the ‘lovely’ seats at the back of the bus.

And like Rosa Parks, it is our duty to stand up to everyday sexism and prejudice wherever we find it. 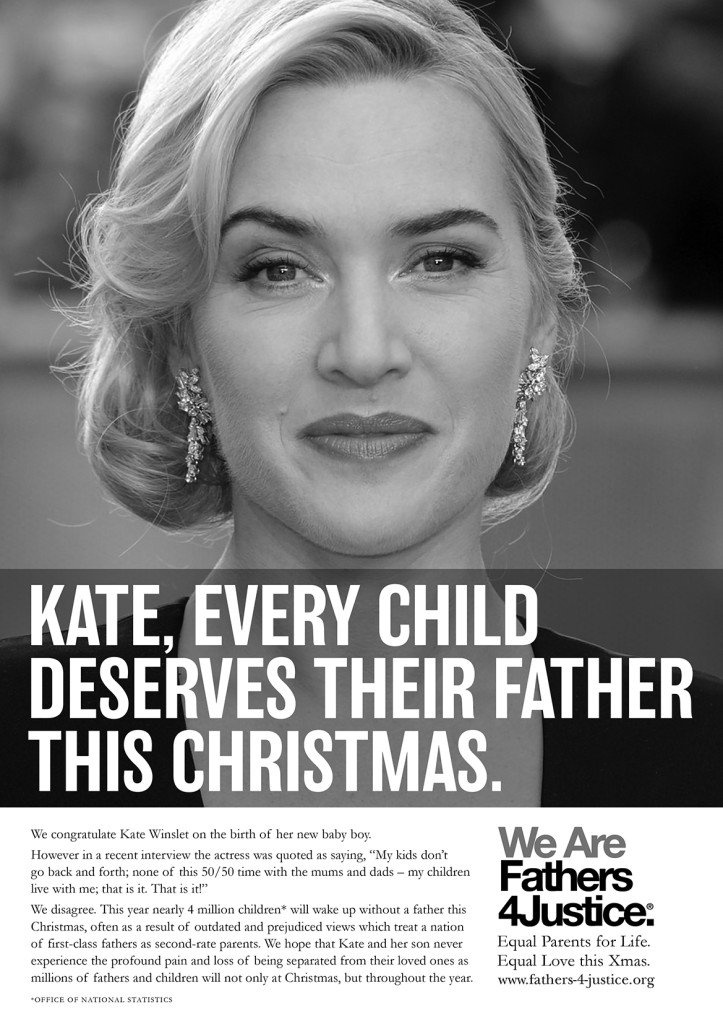