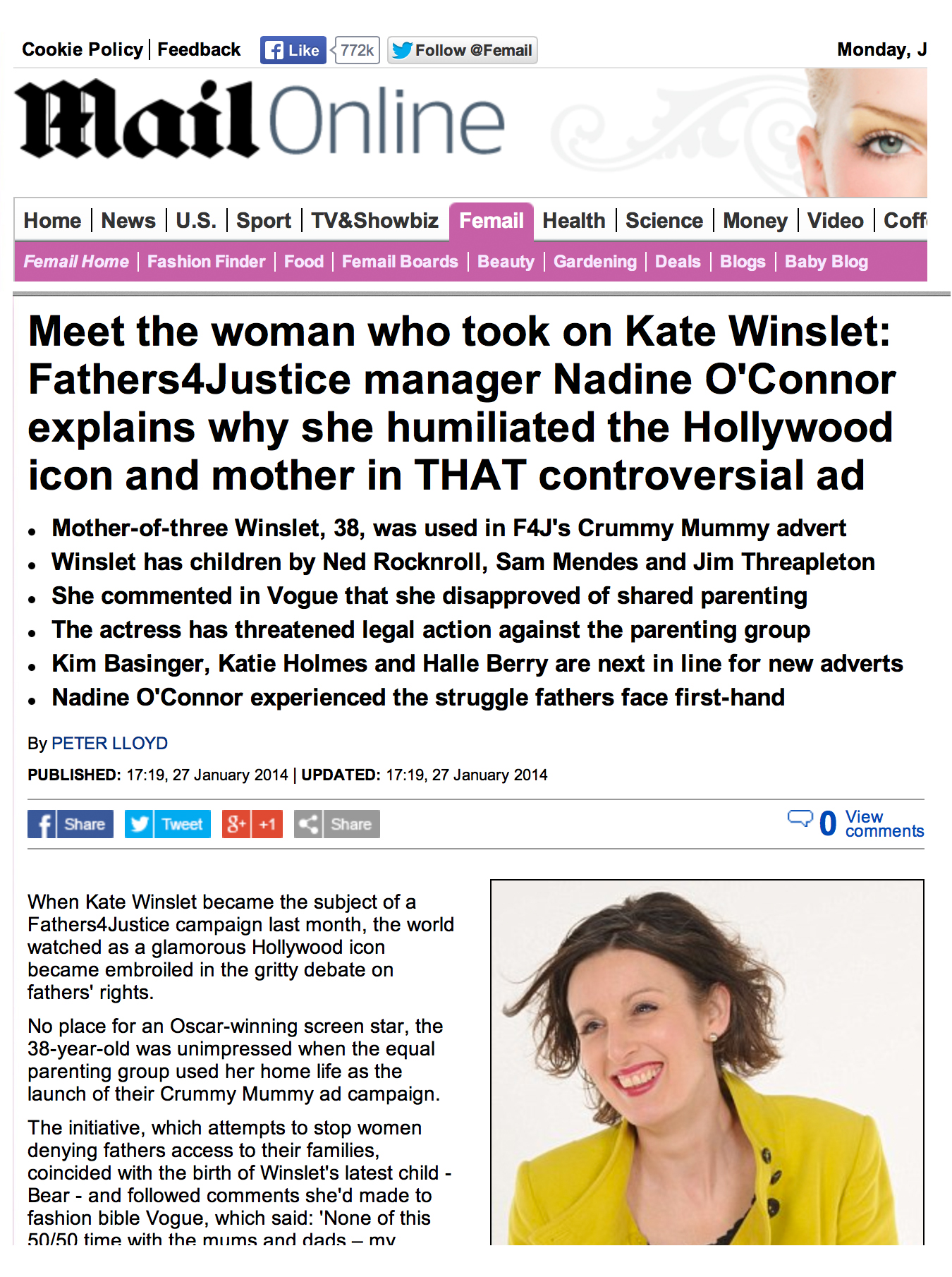 Meet the woman who took on Kate Winslet: Fathers4Justice manager Nadine O’Connor explains why she humiliated the Hollywood icon and mother in THAT controversial ad.

When Kate Winslet became the subject of a Fathers4Justice campaign last month, the world watched as a glamorous Hollywood icon became embroiled in the gritty debate on fathers’ rights.

No place for an Oscar-winning screen star, the 38-year-old was unimpressed when the equal parenting group used her home life as the launch of their Crummy Mummy ad campaign.

The initiative, which attempts to stop women denying fathers access to their families, coincided with the birth of Winslet’s latest child – Bear – and followed comments she’d made to fashion bible Vogue, which said: ‘None of this 50/50 time with the mums and dads – my children live with me; that is it.’

The advert, which ran in the Daily Express, criticised the Titanic star for her comments on shared parenting and re-ignited the debate on our country’s creaking custody courts.

Unsurprisingly, Kate – who also has a 13-year-old daughter, Mia, from her first marriage to director Jim Threapleton and a nine-year-old son, Joe, from her second marriage to Sam Mendes – objected to becoming a poster girl for sexist mothers, launching a legal threat against F4J along the way with high-power law firm Schillings.

But, rather than finding angry men in Batman costumes at the helm, the kingpin was – perhaps surprisingly – a woman.

Nadine O’Connor was the brains, the braun and the balls behind the controversial ad, which directly questioned a woman’s automatic, unquestioned power in family law.

So the first question when we meet in London’s Waterloo is perhaps an obvious one: why on earth would she want to swap sisterhood for a superhero suit? After all, no matter how powerful women have become in recent years, the partnership remains an unlikely one.

‘In 2005, three years into my own battle, a girlfriend told me about Fathers4Justice. She said my story sounded like that of the men she’d read about in the papers, so I went to a meeting with my Dad,’ she says.

Several years of activism followed – including interrupting a live BBC broadcast of the National Lottery – but fast-forward to the present day and Nadine, who is fashionable and funny as well as fantastically formidable, is now the organisation’s campaign manager: uniting men who, ironically, have been disenfranchised by women.

Specifically, between 2010-12, she led negotiations with both the Conservatives and Liberal Democrats on family law reform.

This message, she says, formed an integral part of her recent work with ‘the Kate campaign’ because, socially and legally, it remains off-limits. Even in the upper echelons of LA.

So what needs to change in order for everyone to benefit from equal parenting? A massive, time-consuming, expensive overhaul of the legal profession and governmental child care agencies?