The father of all interviews: F4J Founder Matt O’Connor chats to Peter Lloyd, author of the book every man must read, Stand by Your Manhood. 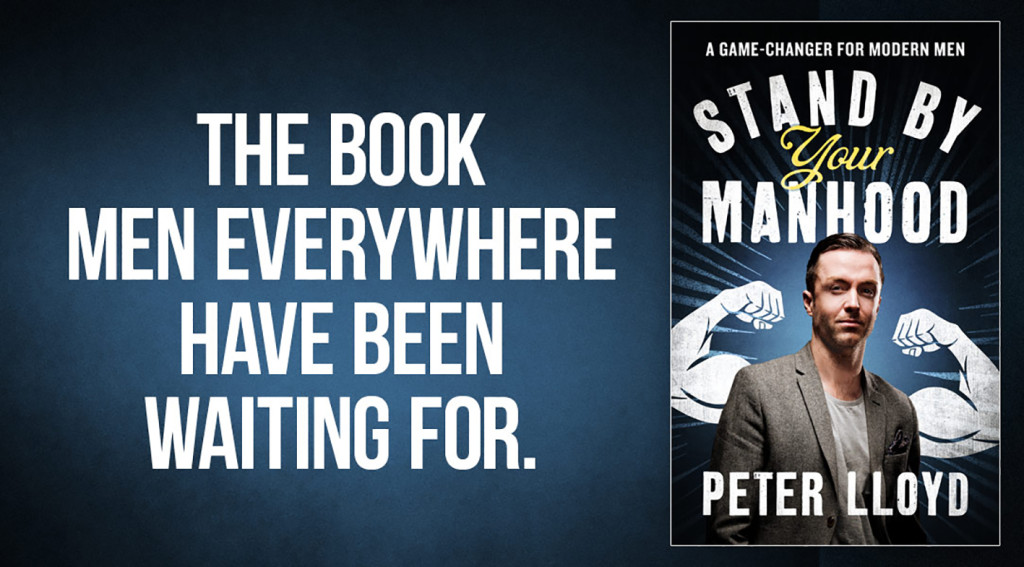 Peter, what made you write a book about the challenges facing men?
I work in the media and it was clear that nobody else was writing anything about men. There were lots of great stories about men and fathers, yet I was amazed nothing was being picked up. It’s clear there is a veil drawn over men’s issues in the media by a feminist mafia who have made anything to do with men and fathers taboo.

It’s also true that anything about men takes the issue away from women and that women are the main source of advertising revenue and political influence. Some people excuse this by saying men don’t want to discuss personal issues, but that’s bullshit. Men have been communicating just fine. It’s talking about it publicly that’s been an issue.

Women also like men to be strong, so anything where men are discussing difficult personal issues doesn’t fit in with the ‘Titanic’ rational of women and children first. My starting point is, why can’t everyone come first?

Men also need a voice and need to confront that prejudice.

If I ever make a film I’m going to insist on a no nudity / no scenes clause with Kate Winslet until she agrees with shared parenting. I loved the F4J campaign because all they said was that her views were prejudicial and unacceptable and what did she do? Call her lawyers in.

Was there anything you left out of the book because it was too controversial?
The publishers (Biteback Publishing) were great and the book was uncensored. A small section on Miriam Gonzalez Durantez (Nick Clegg’s wife) was left out for editorial reasons as it didn’t fit with the rest of the book.

Did any of the interviews in the book make your eyes water?
A little. The section on penoplasty could make you wince. There were some horror stories about men self-operating and injecting cooking fat into their penises. I think that is more of psychological issue than anything else, yet it’s another taboo subject which is rarely discussed.

Do you think there is a pressure on men to be feminists?
Yes, there is a real pressure which has only happened quite recently over the last few years. Feminists have traditionally been anti-men but they have now realised that there is this huge untapped market they want to suddenly engage – and that’s men. I call it ‘brass-neck syndrome’. Actress Emma Watson says men have misinterpreted feminism as ‘man-hating’, but the reality of feminism is that it has devalued men and their role in society. In the current climate men are stuffed. You are either a feminist or a chauvinist.

If you look at the ‘This is what a feminist looks like’ t-shirt, it’s a symbol of shame. Feminists are saying you better believe – or else! But how many men want to look like Ed Miliband in a t-shirt?

Until feminism says men are of equal value then no man should identify with feminism. It’s not reasonable to expect men to support something that hates them. It’s the same as signing a credit card. Read the terms and conditions before signing up to an abusive relationship. It’s time to say equality and feminism are not synonymous.

Another example is the pressure faced by the Chief Executive of CALM, the Campaign Against Living Miserably, who is a feminist. Even she admits the system is anti-men and struggles to secure funding for men, even though the biggest killer of men under 45 is suicide. It’s just seen as being politically incorrect.

This extends to the media which doesn’t address the issues and when it does touch on them, does so in such a limp way, it loses any impact. This surrendering to feminism isn’t doing men any favours. It’s like being a man on woman’s terms.

I think men in the media need to be unapologetic and address these issues directly. We have a right to offend feminists in the way I’m offended by men being rinsed in divorces, boys being circumcised, fathers being denied access to their kids and our life expectancy being so crap.

At no point should men have to apologise for having an opinion or being honest. The father’s rights issues would be erased in a single day if women agreed to equal rights, but it’s because of celebrities like Kate Winslet are so bigoted, that it reinforces that prejudice.

What has the reaction from feminists been like?
The reaction from everybody has been largely positive and I haven’t been subject to much trolling, apart from one woman who hadn’t read the book, and if she had, might have realized we were on the same page.

The book is very funny – is humour important when tackling sensitive issues?
With humour you are sugar-coating a bitter pill. It’s a great British tradition, to laugh at ourselves and adversity. I’m not sure there is much evidence to suggest feminists have a sense of humour, though women clearly do.

You have to find laughter in the absurdity of some of the contrary things men have to put up with. If you hold a door open for a woman you are being sexist, yet if you pay for dinner that’s not sexist.

What do you think about Pope Francis’s comments about children needing a mother and a father?
It’s sad that something that is common sense is now seen as controversial and that feminists think it’s an inverse dig at single mums. It’s good he has said something which is constantly been airbrushed out of the national conversation. Men and children need to hear this.

When it comes to the ‘politics of the penis’, what can men do to improve their lot?
My message to men is this: opt out. Opt out of marriage, opt out of having kids, opt out of the system. Sex is manipulative and it’s easy to manipulate a man about sex. Government manipulates our basic, primal urge to have sex. How else is it going to coerce men into funding what they don’t want and is against their interests? Whichever way you look at it, statistically for men, marriage is the fairytale that has become a nightmare because men have no rights or control about what happens.

Look at Fathers4Justice activist Guy Harrison and his wife Emily (sister of Pop star James Blunt). If something so extreme (losing his daughter) can happen to a man like that, it can happen to anyone and every day, it does.

That’s why the personal should be political for men. We need a Minister for Men, somebody to address multiple, urgent issues, be it boys failing in education or why the NHS spends to little money on men. We need to be more militant about this, especially at the ballot box. Politicians need to hear our voice.

What lessons can men take from the book?
This is the first book about men to be published in the UK by a political publisher, and that sends a powerful message. That’s a real landmark moment. For the first time we are trying to arm men with knowledge and that knowledge is power. I think we need to be chivalrous to ourselves and put ourselves first. If you have no internal armour you are very vulnerable, so I’ve tried to tell men they are not alone, but that if we are not kind to ourselves, nobody else will be.

That’s why this book is unapologetically for the benefit of men, not the approval of women.

Stand by Your Manhood: A Game-changer for Modern Men by Peter Lloyd is available now from Biteback Publishing
https://www.bitebackpublishing.com/books/stand-by-your-manhood