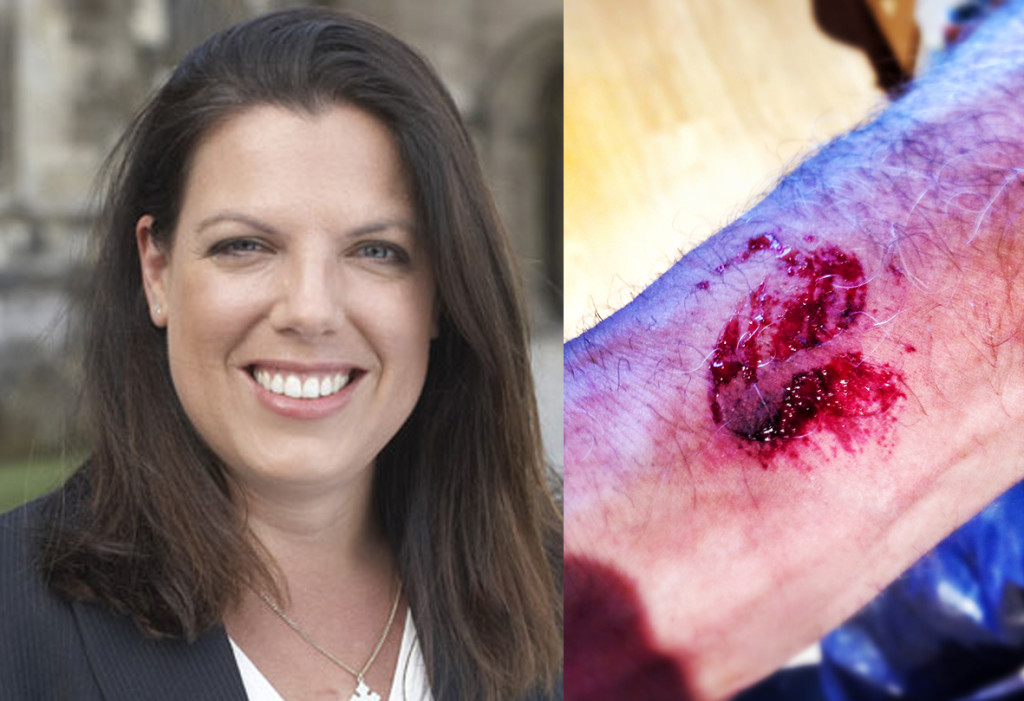 Pic: Caroline Nokes MP and the bite mark suffered by a victim at the home of F4J Founder Matt O’Connor.

The Founder of Fathers4Justice today criticised the Independent Press Standards Organisation after he complained about the failure of the Romsey Advertiser newspaper to report the involvement of an MP in a violent incident at his home in February 2014.

The incident led to Matt O’Connor and his wife beginning civil action against Caroline Nokes, the MP for Romsey and Southampton North, for aiding and abetting assault, causing alarm and distress to a child, stalking, harassment, breach of privacy and trespass. The O’Connor’s seek damages and compensation for anxiety, distress and fear, caused to their 8-yr-old son who is also a party to proceedings. The case is still before the County Court.

On 20th February 2015 the Romsey Advertiser reported that the claim had been ‘thrown out’ at a court hearing, yet the paper failed to give the O’Connor’s a right to reply to the story before publication, failed to report that the O’Connor’s had not been informed of the hearing (thereby the ruling going unchallenged) and then denied them any right to reply after the article had been published and any comment subsequently about the ongoing legal action.

Critically, the paper failed to report why the claim had been brought against the MP, which Matt O’Connor says was fundamental to the reporting of the case and a matter of acute public interest in the run up to the General Election.

O’Connor told IPSO that the Romsey Advertiser failed in it’s public duty to report the involvement of Caroline Nokes MP in a violent attack involving her friend at Mr O’Connor’s home on 20/2/14 which formed the basis for the legal action. The attack, where a man forced entry onto Mr O’Connor’s property, took place in front of his 8-yr-old son and Mr O’Connor was punched and his landlord was savagely bitten.

The MP repeatedly denied any involvement to constituents, yet it transpired Ms Nokes was interviewed by Hampshire Police at the scene and provided a witness statement to them. She subsequently admitted driving her colleague to Mr O’Connor’s home, where he was arrested. He was later given a Police PIN notice for harassment of the family and their son.

Despite this being a matter of serious public interest in the lead up to a General Election where Ms Nokes was seeking re-election, the Romsey Advertiser failed to report her involvement in the attack (which was widely reported in the national press). By failing to report her involvement in the incident, O’Connor argued that the paper deprived voters in the MPs constituency where the attack took place, of any knowledge of her involvement. Mr O’Connor’s family were then subject to malicious communications which were focused on their children and their car was vandalised. They were forced to leave their Hampshire home in October 2014. Again, none of this was reported in the Romsey Advertiser.

IPSO said about the omission of these facts, “…the selection of material for publication was at the discretion of the editor.”

Matt O’Connor also complained that whilst he was denied any right to reply, the defendants were allowed extensive, false and misleading comment which created a prejudicial tone to the article, sympathetic to the MP in the run up to the election.

He also said quotations attributed to the Judge in the article were in fact supplied by the defendants, which again contributed to the misleading tone of the article. The IPSO Complaint’s Committee accepted that the quotes in the Romsey Advertiser were not from the Judge, but from a defendant, and that they were not from ‘an official document produced by the court’, yet failed to uphold the complaint.

O’Connor said the Romsey Advertiser attributed the following quotes to the judge as fact, when they were exaggerated claims made by a defendant: “with a judge saying that there was a total absence of evidence”. Yet a copy of the judgement, supplied by Mr O’Connor to IPSO, made no such reference or comment. Had the Romsey Advertiser approached Mr O’Connor for comment before publication he would have been able to correct these misleading claims.

O’Connor said that reporting of a grossly exaggerated form of words, wrongly attributed to the Judge, was wholly misleading, and improper and was covered by Clause 1 of the IPSO code about accuracy:

“The Press must take care not to publish inaccurate, misleading or distorted information, including pictures. The Press, whilst free to be partisan, must distinguish clearly between comment, conjecture and fact.”

The Romsey Advertiser also stated that one of the defendants “visited their (O’Connor’s) home to serve defamation papers”, yet no legal papers were served and the defendants had no lawful reason to be at Mr O’Connor’s home. Mr O’Connor said this was yet another example of inaccurate reporting covered by Clause 1 of the IPSO code about accuracy.

Mr O’Connor said comments about Fathers4Justice in the last two paragraphs of the article were also inaccurate.

The Romsey Advertiser said, “A dispute between Ms Nokes and Fathers4Justice developed after the group accused the MP of breaching her 2010 pre-election promises to it over the Children and Families Bill. Ms Nokes denies this and said that she contacted the group which fights for dads’ custody rights, offering to help make written amendments to the Bill, but the group had not told her what it disagreed with.”

O’Connor said this was also entirely false, and that Fathers4Justice had complained about Ms Nokes 2010 pre-election promises about Shared Parenting, not the Children and Families Bill which did not exist until after the coalition government was formed. Ref amendments to the Bill, the group had informed Ms Nokes that it expected her to honour her commitment and in fact sent her a 1,000-page submission for the Children & Families Bill Committee which she sat on. The MP did not respond.

Matt O’Connor later discovered, in the course of making the complaint to IPSO, that the Newsquest Hampshire editor-in-chief Iain Murray, who has responsibility for the Romsey Advertiser, also sits on IPSO’s Editors’ Code of Practice Committee, though IPSO claim this is a separate body. Further, Mr Murray has a working relationship with the defendant Caroline Nokes MP and her father Roy Perry who is the leader of Hampshire County Council. These revelations bring into question the impartiality of IPSO when making this decision.

Mr O’Connor said that by upholding various points of the complaint, but failing to take action against the Romsey Advertiser, IPSO undermines any confidence the public can have in the organisation and the committee.

Said O’Connor, “IPSO makes a mockery of our idea of a free press and free speech. It upheld several aspects of our complaint, accepted there were omissions and factual inaccuracies, yet has done nothing to enforce it’s own code and ordered no changes to the article.”

“IPSO parades itself as an arbiter of a fair and free press, but in reality it simply provides cover for a rotten, venal media to continue it’s business as usual, on behalf of the vested interests. The cancer of political censorship and suffocation of free speech, let alone any right to reply, is chilling. These are legitimate matters of public interest involving an MP and children, in the run up to a General Election yet there has been a conspiracy of silence. People can draw their own conclusions as to why this matter was not been reported accurately or fairly.”