Fathers are for life, not just Father’s Day. By Darryl Westell 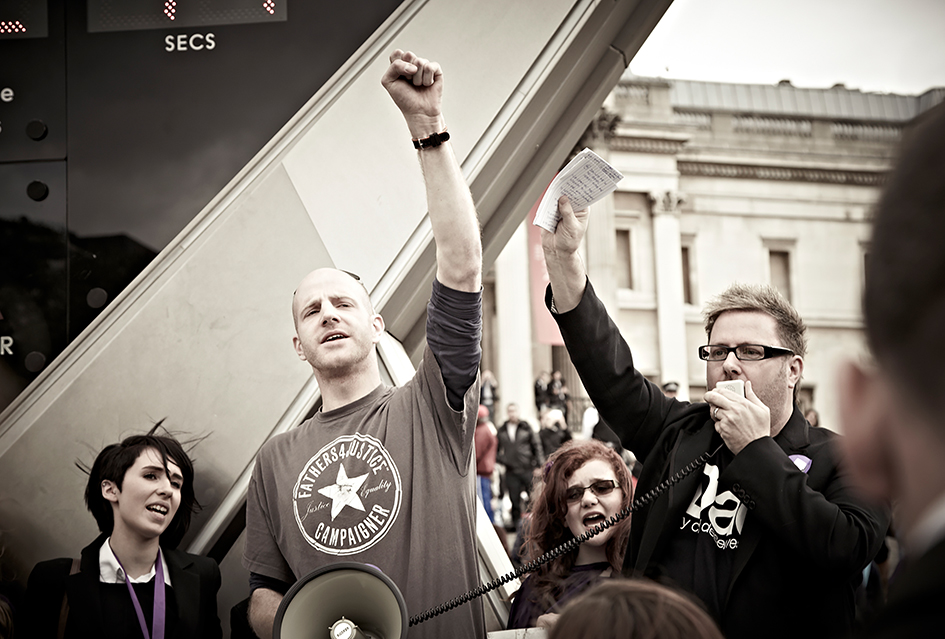 And so Father’s Day 2015 comes to haunt the fraternity of fatherhood once again with pub signs declaring their ‘fab dads’ menu and glossy Sunday supplements presenting us with whimsical throwbacks to dads in their element: manning the BBQ, fixing the leaky tap, playing football with his kids.

These suggestions of fatherhood are painful and hurtful to many dads who find themselves bereft at this time of year; for the separated parent can only consider how others do it on these solemn occasions. Father’s day without your children is only marginally less painful and gut-wrenching than Christmas has become as the ‘absent parent’.

These commemorative occasions positively mock us, and we, and our lost children, endure the silent horror show of Family Law in the United Kingdom year after year.

For this is the ‘living bereavement’, Matt O’Connor attributes to the phenomenon of being a father of children who are still alive, and yet who have been taken from us too soon, and with brutality. Thus their absence from our future has left our hearts and our minds between the living and the dead; in a limbo of uncertainty and despair, mixed with hope that one day they’ll find their way back. Fear and anguish fight for our attentions, fleeting moments of wonder at what we once had, and nightmare inducing anxiety over what we may never have again infiltrate every moment we are alive.

What’s it like, to those who don’t live this experience?

Eighteen months ago, my son was forced out of my life, and has not been back since. He left behind not only his father, but his young siblings too, one whom he has never met.

The decision to end the fatherhood of a man, and literally destroy the only chance my son will ever have to a relationship with his father, was taken in a moment by a family judge, sitting in the family court in Derby. The very same that had to endure three superheroes clinging to its ramparts back in 2004, declaring the court ‘Under New management: Fathers4Justice’.

The judge had before him two parents and a Cafcass officer, a Mr Alan Murdoch of the Derby branch of Cafcass; the very branch that was ‘decontaminated by Fathers4Justice’ in 2003.

It leaves you hollow, half the man you were, you are broken, ashamed, belittled, emasculated, devastated, and all at once and all of the time. Nothing changes it; no amount of success or peace in other areas of your family, or joy that is to be found with new children arriving in your life.

Though all for these things do ‘save’ us as well as helping us to rekindle the sense of humanity that was taken, the feeling of failure, and of being hollowed out and left to die continue; for that is the human condition: it is fluid and changeable, but certain traumas are ones we cannot survive, they linger forever.

The judge made a string of decisions that will forever maim my family, and I know that many of you reading this, Today Of All Days, will have been similarly maimed by Cafcass officers, judges and family courts up and down the land.

No evidence of my unsuitability as a father was offered by my ex partner. None was needed. As we were unmarried at the time of my son’s birth, his mother gained automatic Parental Responsibility. I gained nothing, only the option of applying to the court to have this granted in my favour. This is why F4J’s call today for a reigniting of the demand for automatic PR, as well as a presumption of shared care, is welcome.

For the automatic presumption currently, that we will not have either of these two things is abhorrent; there’s simply no good reason for this status to be upheld. There’s no evidence whatsoever that this stance benefits the child. None. Not even anecdotal.

There is though a mass of evidence, both anecdotal and academic that supports the view of presumption on both counts; it simply happens to not be desirable from the feminist-led lobby world-view that surrounds family law that this be presumption for fathers be granted; ‘men are bad’ and don’t deserve that privilege, so they say.

And here lies the first obstacle that millions of us have faced when attempting to cling on to a relationship with our children after separation: just being considered as worthwhile. Never mind you’re the father, it matters not, we only recognise in law in this country, by absolute default, the right of a mother to have PR over her child. And so my fate was sealed, as many months of delays and of manipulations of the court system were used to keep father and son firmly away from each other.

These mere facts though are routinely and glibly ignored by the public, and reinforced by the media. Yesterday’s interview with Matt O’Connor in The Guardian reminds me of this, and reminds me of just how deep the prejudice against fathers still runs. Susanna Rustin opens her companion piece to Father’s day with the most staggering question; “do F4J have a point?” I cannot tell you how many times I’ve been bored and incandescent at this question; too many to count. But that it’s still being asked, after 13 years of campaigning is truly depressing.

Has equality got a point?

Is the statistic that four million fathers are absent from their children’s lives a point worth raising?

Has the idea that fathers are important got a point?

Have F4J got a point when they brazenly suggest that fathers should have their human rights to a family life upheld?

Ruskin cannot be that stupid that she thinks family law is not seriously letting fathers and children down, or has not been now for decades? That would surely suggest, if it were true, that mass family break down in the UK was because this country was full of feckless fathers, of ‘dead beat dads’? I thought The Guardian stood for more than blind prejudice? Guess not, judging by these choice remarks in the same article:

“are they a bunch of hotheaded misogynists”- now tell me, where does this question come from? Why would they be, do you think she supposes? Would it be that in her view any father who is not seeing his children, must be this person? Maybe this:

“are they more interested in declaiming on the subject of male victimhood, and being on the news in Batman suits, than in anything so mundane as paying child maintenance or taking their children to swimming lessons?” What a thing to say, for the unavoidable conclusion here is that Ruskin’s insinuating that fathers consider “paying child maintenance” and “taking their kids swimming” as glib inconveniences, and not a part of the emotional and financial responsibilities of being a father. Maybe she should check her facts too as it is not particularly supportive of her assertions when we consider the fact that fathers are the ones paying mothers the maintenance in 9 out of 10 instances.

This tells us two things. Firstly, men almost always pick up the bill for their children, even after they’ve had them taken away, and secondly, that fathers are due a little bit of respect, not derision, since the financial support is almost always derived from dad, not mum.

“Fathers4Justice has failed” declares Ruskin after considering the fact that the law has not changed according to F4J’s stated aims. This is a contemptible thing to say, for it attributes, in the same sentiment, not a jot of failure to both Labour and Tory governments, the family courts themselves, and her profession in its own right. But in these quarters the failure lies. The collective failure of a whole country to protect the human rights of half of its population and all of its children.

The failure Miss Ruskin lies with those who have stood by and done nothing whilst F4J toiled and bled.

The failure lies with those willing to ignore the failures in family law because those failures were too difficult to untangle.

The failure lies with those who have known of the situation behind closed doors but done nothing because they were either ignorant, bigoted, had something to lose, or blind. Or all of these.

No, the consummate failure lies, always, with those who see, but do nothing, not with those that do.

The most upsetting passage for me though was the following: “He is glib about the effects on children of residency being passed from parent to parent as courts dish out penalties for flouted orders, and says moving homes or schools is no big deal”.

Residency “passed from parent to parent”? Almost never happens, and a shame too, for if the courts could start recognising that a child in danger of having their other parent excised from their lives should be placed with the parent who can protect them, well than, such as with Rebecca Minnock, we might start to rebuild our decimated families. And where oh where does she get the idea that “courts dish out penalties for flouted orders” from?

This is so demonstrably untrue as to make me question Ruskin’s intelligence, never mind her journalistic integrity; for if only flouted orders were punished, well then many hundreds of thousands of fathers like myself would not be spending this Father’s Day without their children. “If mum doesn’t send little Johnny to school, she will go to jail. If mum doesn’t send little Johnny to see dad, nothing happens. There’s no sanction.” replies Matt.

That a broken contact order never results in this sanction is as much proof one should ever need that fathers are simply deemed unimportant. Indeed, paying tax is more important than remaining in your child’s life, if the sanctions for non-compliance in both of these obligations is anything to go by.

No, being a father in 2015 is not important. ‘They’ tell us so; from not having automatic PR, to not having a court order enforced; to being forced to pay for the option to bring an application to court to see your children in the first place; to being forced to see your children in contact centres; to being told that paying maintenance must continue without fail, though the courts will do nothing to ensure you’re supported in having access to your child.

The fact of the matter is this: today is Father’s Day. But every day should be father’s day.

For even today on Your Day, if the mother of your child decides that you’ll never see your child again, then you almost certainly won’t; that moment, whether it creeps up bit by bit, or in one fell swoop, makes Father’s day a hollow spectacle.

For the Father’s Day propaganda will mean nothing to you if you become the father for whom this day means only that you’re reminded of the salient fact that you never stopped being a father, that fathers are for life.

Not just for ‘Father’s Day’.