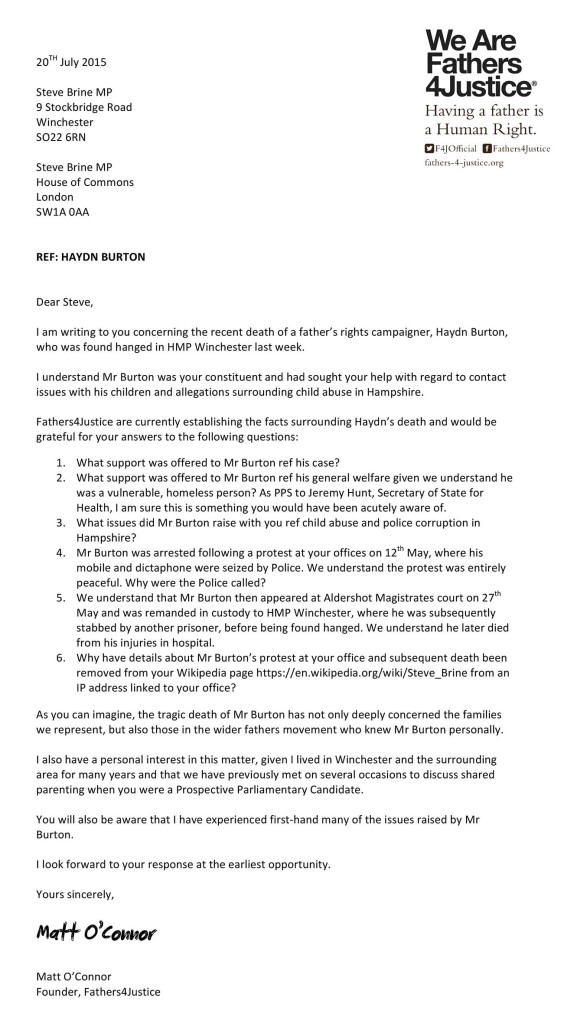 I am writing to you concerning the recent death of a father’s rights campaigner, Haydn Burton, who was found hanged in HMP Winchester last week.

I understand Mr Burton was your constituent and had sought your help with regard to contact issues with his children and allegations surrounding child abuse in Hampshire.

Fathers4Justice are currently establishing the facts surrounding Haydn’s death and would be grateful for your answers to the following questions:

1. What support was offered to Mr Burton ref his case?

2. What support was offered to Mr Burton ref his general welfare given we understand he was a vulnerable, homeless person? As PPS to Jeremy Hunt, Secretary of State for Health, I am sure this is something you would have been acutely aware of.

3. What issues did Mr Burton raise with you ref child abuse and police corruption in Hampshire?

4. Mr Burton was arrested following a protest at your offices on 12th May, where his mobile and dictaphone were seized by Police. We understand the protest was entirely peaceful. Why were the Police called?

5. We understand that Mr Burton then appeared at Aldershot Magistrates court on 27th May and was remanded in custody to HMP Winchester, where he was subsequently stabbed by another prisoner, before being found hanged. We understand he later died from his injuries in hospital.

6. Why have details about Mr Burton’s protest at your office and subsequent death been removed from your Wikipedia page https://en.wikipedia.org/wiki/Steve_Brine from an IP address linked to your office?

As you can imagine, the tragic death of Mr Burton has not only deeply concerned the families we represent, but also those in the wider fathers movement who knew Mr Burton personally.

I also have a personal interest in this matter, given I lived in Winchester and the surrounding area for many years and that we have previously met on several occasions to discuss shared parenting when you were a Prospective Parliamentary Candidate.

You will also be aware that I have experienced first-hand many of the issues raised by Mr Burton.

I look forward to your response at the earliest opportunity.