The Telegraph: Institutional discrimination against dads must end, says Matt O’Connor of Fathers4Justice 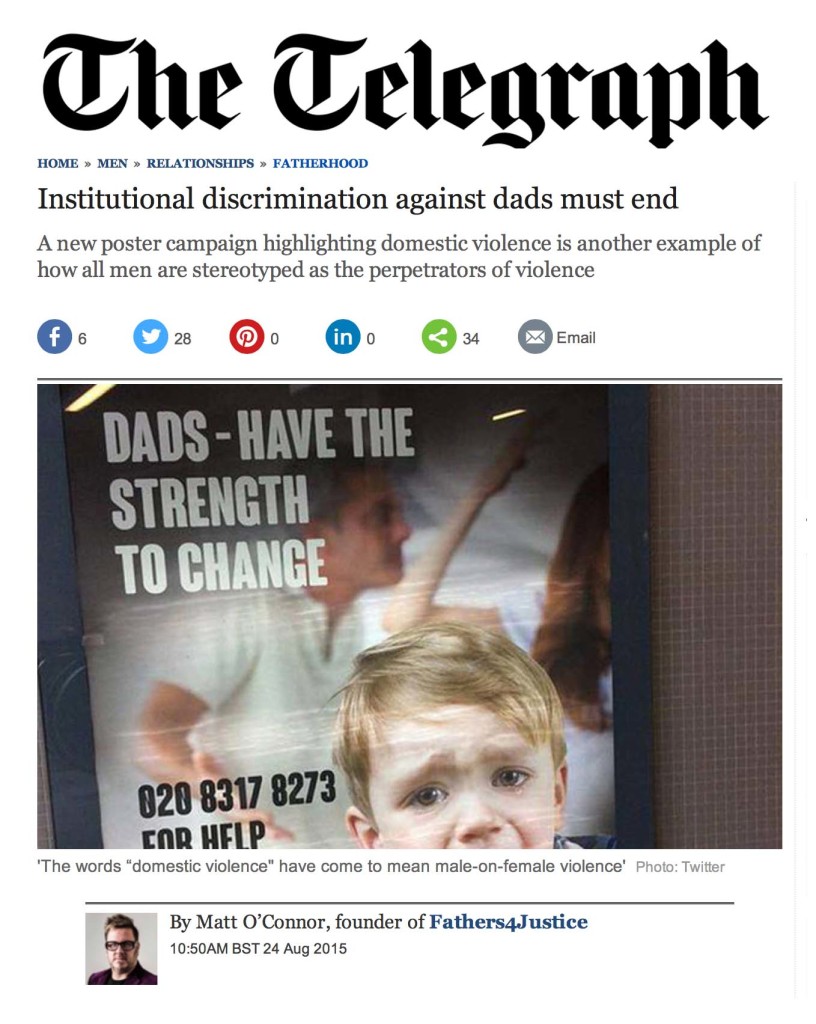 A wave of outrage swept social media after a series of posters went up in London saying “Domestic violence: dads – have the strength to change”.

The poster, put up across the Royal Borough of Greenwich, shows a boy crying as a woman tries to defend herself from a man angrily raising a hand to her. The message of fear is simple: dads are violent and a risk to women and children.

Fathers4Justice supporters complained to both the council and the Advertising Standards Authority. Others individuals and groups threatened to deface or remove the posters.

Men are increasingly unwilling to be demonised by the sort of stereotyping that would be unthinkable if the roles of the genders were reversed. The reality is that both men and women are capable of violence in the home.

The words “domestic violence” have become to mean male-on-female violence. Yet according to the Office for National Statistics in 2013/14, 8.5% of women and 4.5% of men had experienced domestic abuse in the past year, equivalent to 1.4 million female victims and 700,000 male victims.

Family violence, as we prefer to call it, affects all members of a family, irrespective of gender. According to the government, violent crime by women is on the increase. I personally know of fathers who have been stabbed, attacked with burning hot irons and scalded with boiling water.

Most are simply too embarrassed to report these horrific attacks. Worst still, they are likely to be treated as the perpetrators by the police, or simply ridiculed.

An example of the portrayal in the media is the comic-strip headline in the Daily Mirror following the alleged 2005 assault on the actor Ross Kemp by his then wife Rebecca Wade (now Brooks): “Bish! Bash! Bosh! EastEnders hardman Ross battered by his MISSUS. Are the EastEnders hardmen just a pair of big girls’ blouses?”

The founder of the first women’s refuge, Erin Pizzey, told me that that abuse between genders is at roughly equal rates, and that women were often more violent and threatening than men. Because of her views, Erin was subject to death threats from militant feminists and at one point required police protection.

If you want to see an example of this sort of extremism and anti-male discrimination, look no further than some of the comments on the Mumsnet forums, where rampant and offensive hate speech goes unchecked.

But the real danger that flows from the sort of scaremongering and “father fear” stoked by the Royal Borough of Greenwich, isn’t to men, but to children.

There was tragic Mikaeel Kular, whose father called me to say he had been denied access to his son, who had been killed by his mother, who then dumped his body in a suitcase. Yet even after the mother had been sent to jail, the father was still cruelly denied any contact with Mikaeel’s sister by the Scottish Courts, whilst the mother retained access whilst in prison.

If ever you wanted an illustration of institutional “fatherphobia”, these are just a few of the typical case examples Fathers4Justice receives week in, week out, most of which never make the newspapers.

Violence of any sort is unacceptable, but we can only begin to address family violence through open, intelligent, reasonable debate, free from the prejudices of the past.

That is why Fathers4Justice has called for the creation of a Minister for Men and Boys, to give dads an equal voice in government, representing their interests and providing balance and clarity on all family issues.

In the meantime, we are calling on the Royal Borough of Greenwich to remove these posters immediately and ensure future campaigns accurately tackle the reality of domestic abuse, free from gender stereotyping. 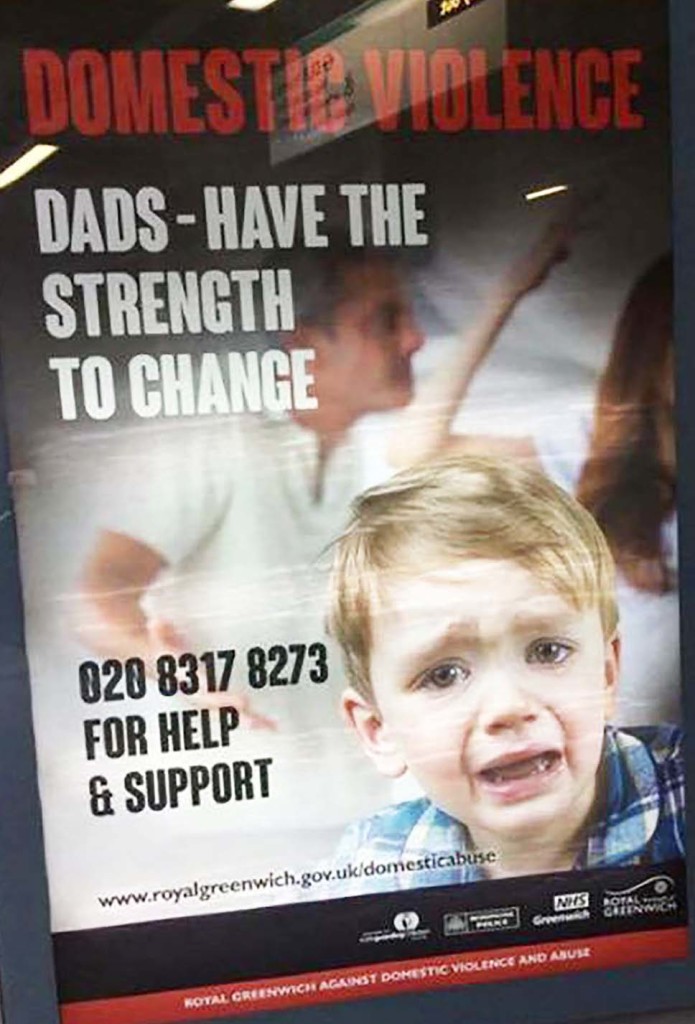