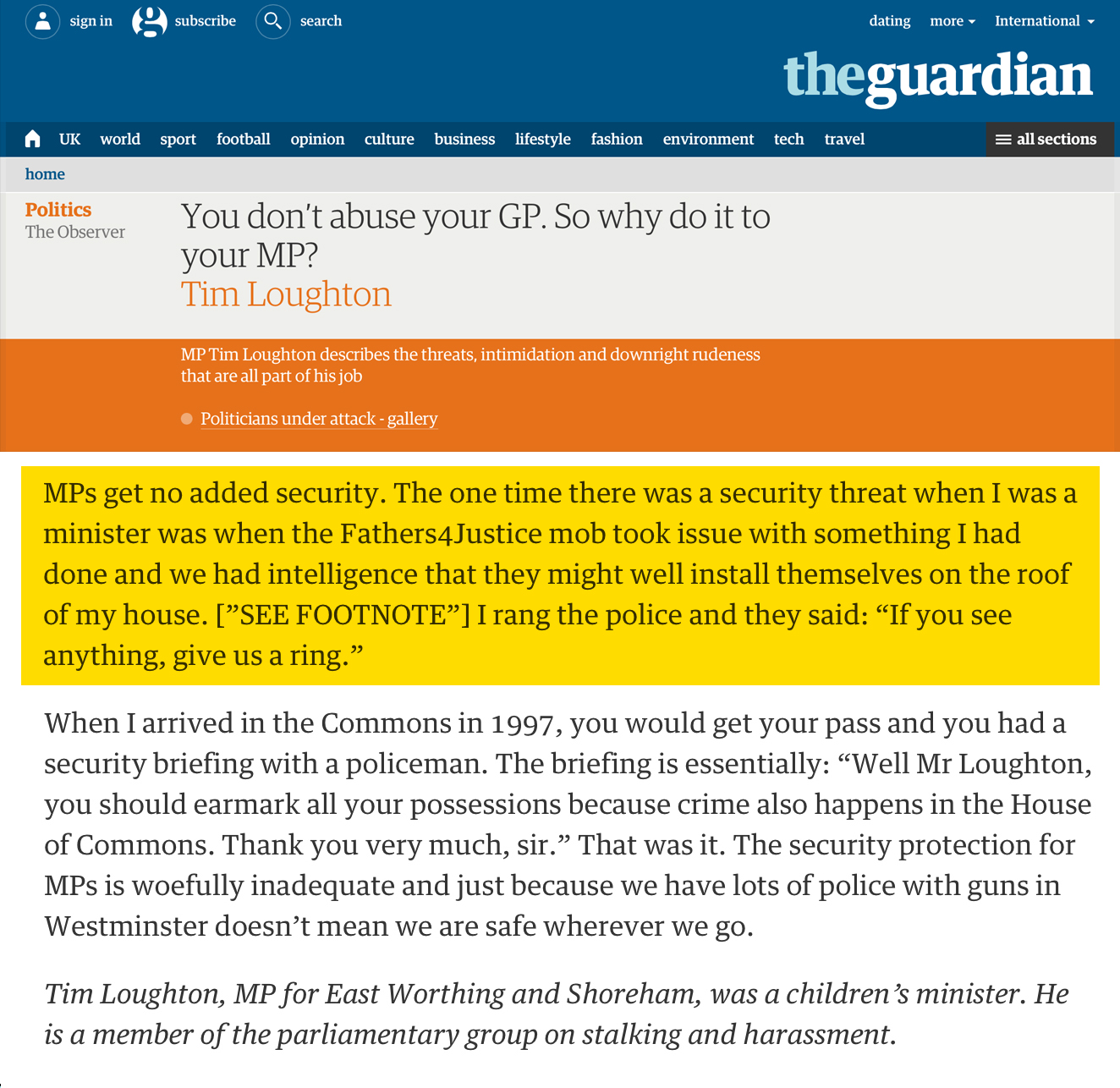 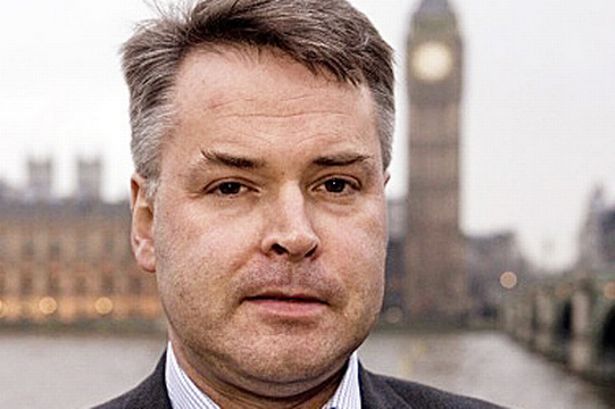 Fathers4Justice today said the Guardian had made a series of false allegations and threats against the group, on behalf of Tory MP Tim Loughton.

The dispute arose when Mr Loughton claimed Fathers4Justice were plotting to target his house when he was the Children’s Minister. F4J said the claim was the latest in a series of false allegations made by Tory MPs about the group.

F4J wrote to the MP and the newspapers that reported the remarks, asking for them to be withdrawn, or evidence supplied to substantiate the claim.

Mr Loughton has refused to respond to the correspondence, and the Guardian now claims to represent the MP. In letters to F4J, the Guardian makes a number of false allegations and threats.

Legal correspondence from Guardian News & Media threatens Fathers4Justice with libel and harassment on behalf of Mr Loughton, demands the group “make reparations” to him, and falsely claims the group are still engaged in direct action protests.

Said a spokesman for Fathers4Justice today, “It is extraordinary that a Tory MP is sheltering behind the legal department of an independent, left-wing newspaper, who are then making further false allegations on his behalf and issuing threats against a campaign group that simply seeks to challenge these false allegations.”

“We have reminded the Guardian that Mr Loughton is an elected Member of Parliament for the Conservative Party, who is publicly accountable, and has made a public allegation which he should stand up or withdraw so this matter can be resolved quickly and reasonably.”

“We believe the conduct of both the MP and Guardian News & Media is a matter of public interest and have published this open letter on our web site accordingly.”

The group go on to highlight other false allegations made against them by David Cameron and other Tory MPs.

We write further to your letters of 10th and 11th of February.

Re: Observer/Guardian article 23rd January 2016 entitled: ‘You don’t abuse your GP. So why do it to your MP?’

The allegations we complain of, dated 23/1/16 in The Observer & The Guardian online state: “MPs get no added security. The one time there was a security threat when I was a minister was when the Fathers4Justice mob took issue with something I had done and we had intelligence that they might install themselves on the roof of my house, I rang the police and they said: “If you see anything, give us a ring. He added: ‘Just because we have lots of police with guns in Westminster doesn’t mean we are safe wherever we go.”

For the avoidance of doubt. Fathers4Justice has never planned to target the home of Tim Loughton MP, nor stage a protest at his home.

You are fully aware that Mr Loughton’s allegations have been published elsewhere, and that any claim is not restricted to the Guardian News & Media, so you cannot claim to be the sole legal representative for Mr Loughton.

Secondly, Mr Loughton is a separate party and would be a defendant in any claim because he wrote the article. It is our legal right to challenge him and defend our reputation, not least because his harmful allegation remains online and has not been withdrawn.

Further, you provide no evidence whatsoever to justify the claim or offer any defence save making further false allegations about our campaign.

With regard to Mr Loughton, he has chosen not to respond to legal correspondence, or stand up the claim or apologise for it. Nor has he confirmed you are authorised to act on his behalf, nor would you be able to act on his behalf ref any other claims.

We remind you that Mr Loughton is an elected Member of Parliament for the Conservative Party, who is publicly accountable, and has made a public allegation which he should stand up or withdraw so this matter can be resolved quickly and reasonably.

As previously stated, we are concerned about the serious harm caused by the publication of your allegations about our campaign, especially given the wide readership of your web site, our ongoing work with politicians on the important issue of Shared Parenting, and the context of the claims which state we are a “security threat”, inferring through that use of words, we, Fathers4Justice, an organisation that peacefully campaigns for shared parenting rights, also posed a risk to the safety of an MP and his family.

The consequence of the publication of these false allegations is to lower our reputation amongst the public – and significantly amongst Members of Parliament – and make it likely our work in Parliament will be impeded as a result.

A matter of public interest: False allegations, threats and claims by Guardian News & Media on behalf of Mr Loughton

Your provocative threats are plainly indefensible and quite extraordinary given The Scott Trust was created to “secure the editorial independence of the Guardian and safeguard the journalistic freedom and liberal values of the Guardian free from commercial or political interference.”

We believe it is a matter of public interest that a Tory MP who has made false allegations about Fathers4Justice, is sheltering behind the legal department of a left-wing newspaper.

Guardian News & Media has made the following claims on behalf of Mr Loughton:

If Mr Loughton wants to deal with this matter, he should either stand up his claim, or apologise.

Until he does, we will continue to pursue this matter, and we will not be bullied or intimidated by your legal threats which we believe are a matter of legitimate public interest.

As we have previously pointed out, Mr Loughton’s claim is nearly identical to that made by David Cameron on 27/3/15 in the Evening Standard and Daily Telegraph. 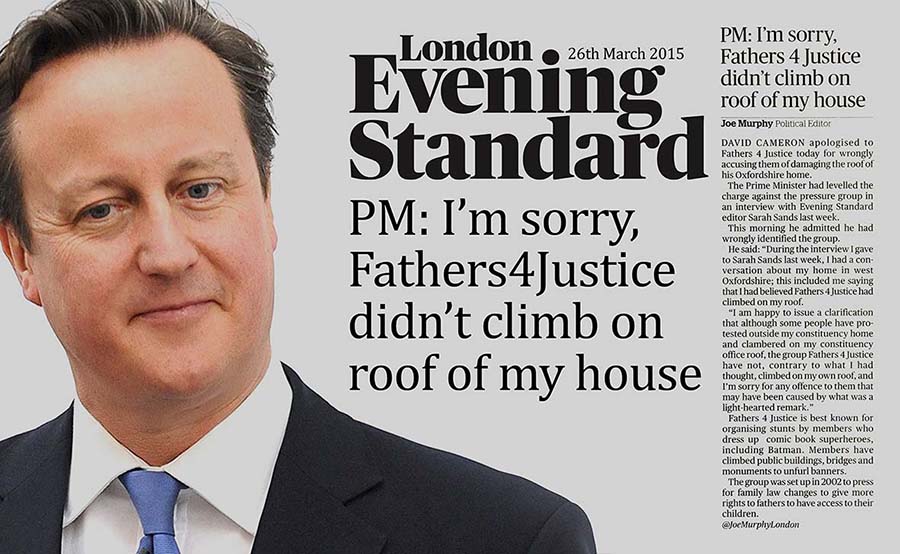 We note Mr Cameron did not shelter behind the legal departments of either The Evening Standard or the Telegraph.

Your allegation of harassment against Tim Loughton MP

Regarding your warning ref harassment, we note that Mr Loughton is a member of the parliamentary group on stalking and harassment. Perhaps Mr Loughton can explain what action constituents should take when their families are targeted by his Tory colleagues?

Not only do Mr Loughton’s allegation forms part of a sustained smear campaign by members of the Tory Party against Fathers4Justice (see Mr Cameron above), but you will be aware that the family of Fathers4Justice founder Matt O’Connor was targeted by one of Mr Loughton’s colleagues, the Conservative MP for Romsey and Southampton North, Caroline Nokes. 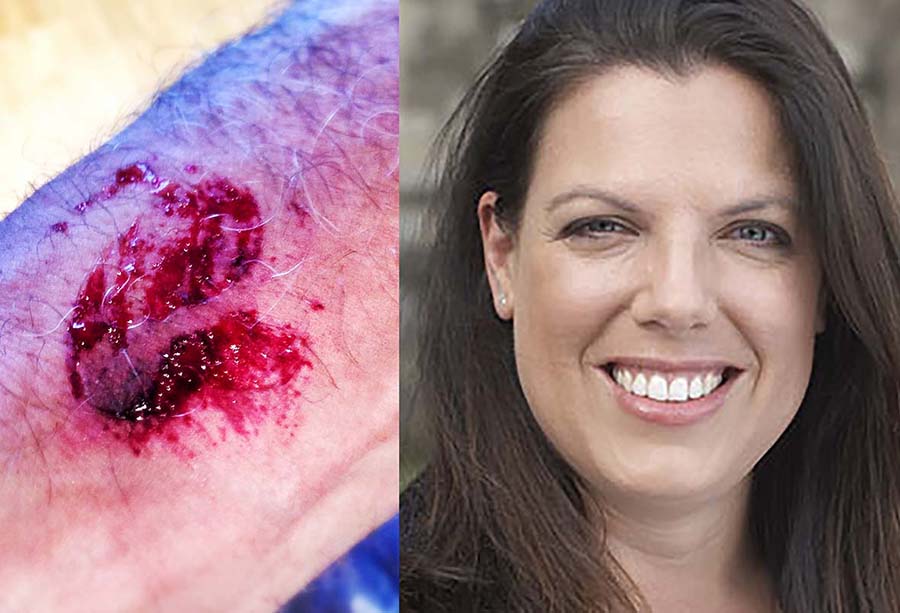 On 20th February 2014, there was a violent attack at the home of Mr O’Connor, which took place in front of his 8-yr-old-son who was deeply upset and traumatised by the incident. Ms Nokes – who was O’Connor’s MP at the time – wrote to constituents categorically denying she was involved or present. It subsequently transpired Ms Nokes had not only driven to London to collect the man and bring him to Mr O’Connor’s home (a trip of some 4 hours), she claimed parliamentary expenses for that trip. The man was arrested after biting Mr O’Connor’s landlord and subsequently issued a Police PIN notice for harassment. Ms Nokes was  interviewed at the scene by Hampshire Police.

She has used her influence as a Member of Parliament to evade justice ever since, not just for this incident, but the coordinated harassment of the family through her colleagues which subsequently forced them to leave their home. Further, the family were subject to hate mail threatening the well-being of their children, their car was attacked and Mr O’Connor subject to death threats.

We will not take lectures on harassment from any MP, let alone members of the “nasty party”, whose modus operandi is as deeply unpleasant, undemocratic and criminal as it ever was.

Further, given Mr Loughton’s shameful role as a Children’s Minister – when his party broke their election promises to Fathers4Justice to introduce shared parenting – we won’t take lectures from him about being “oppressive and unreasonable”, especially when we are defending our reputation in the face of false allegations made by him.

In fact Mr Loughton should make a public apology to Fathers4Justice and the families we represent for breaking those election promises, as well as apologise for making the false allegation and withdraw the remark immediately.

Moving forward, we cannot continue to correspond with you unless you can demonstrate you are authorised to do so.

On the understanding you can provide this authorisation, please you answer the following questions: