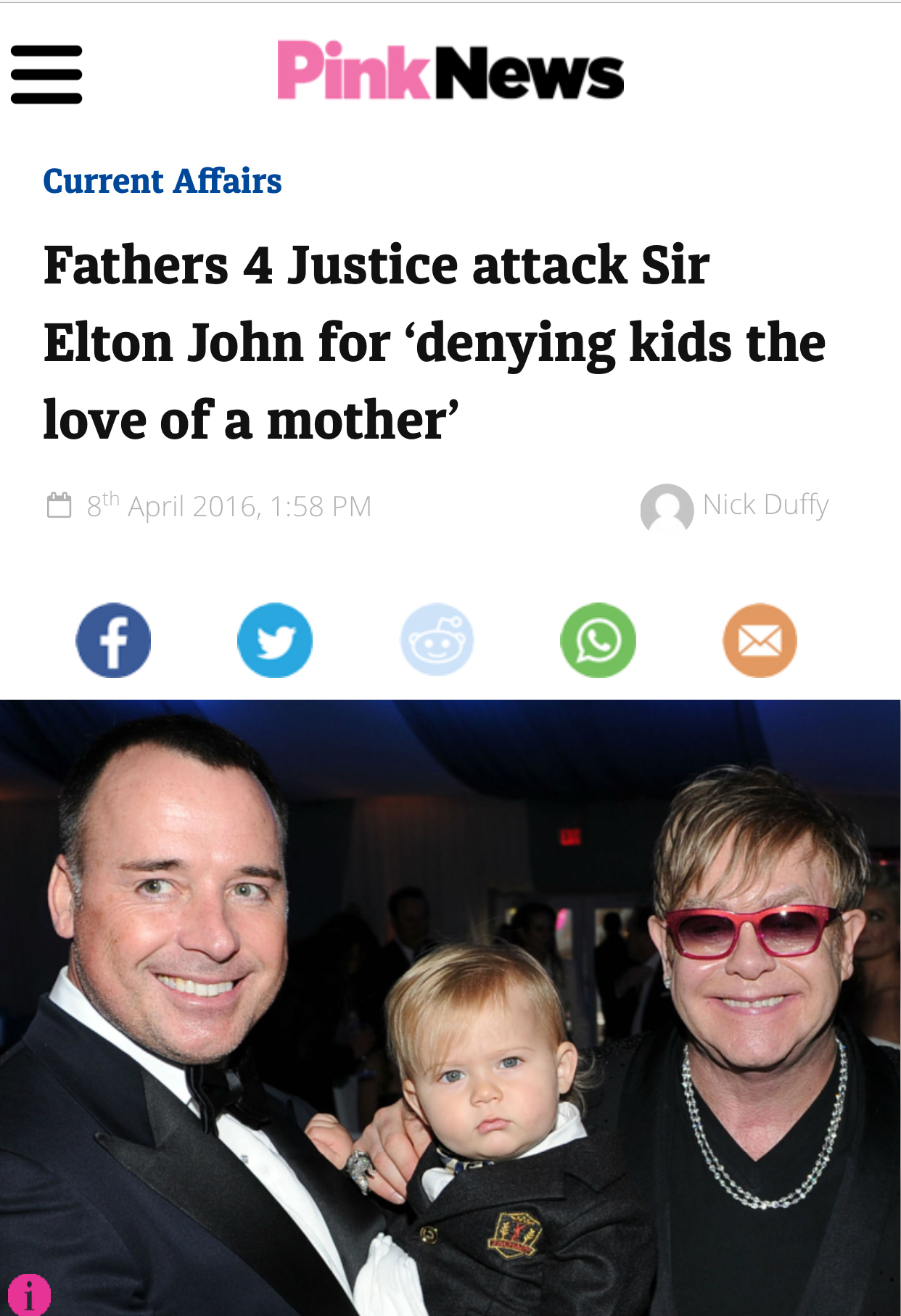 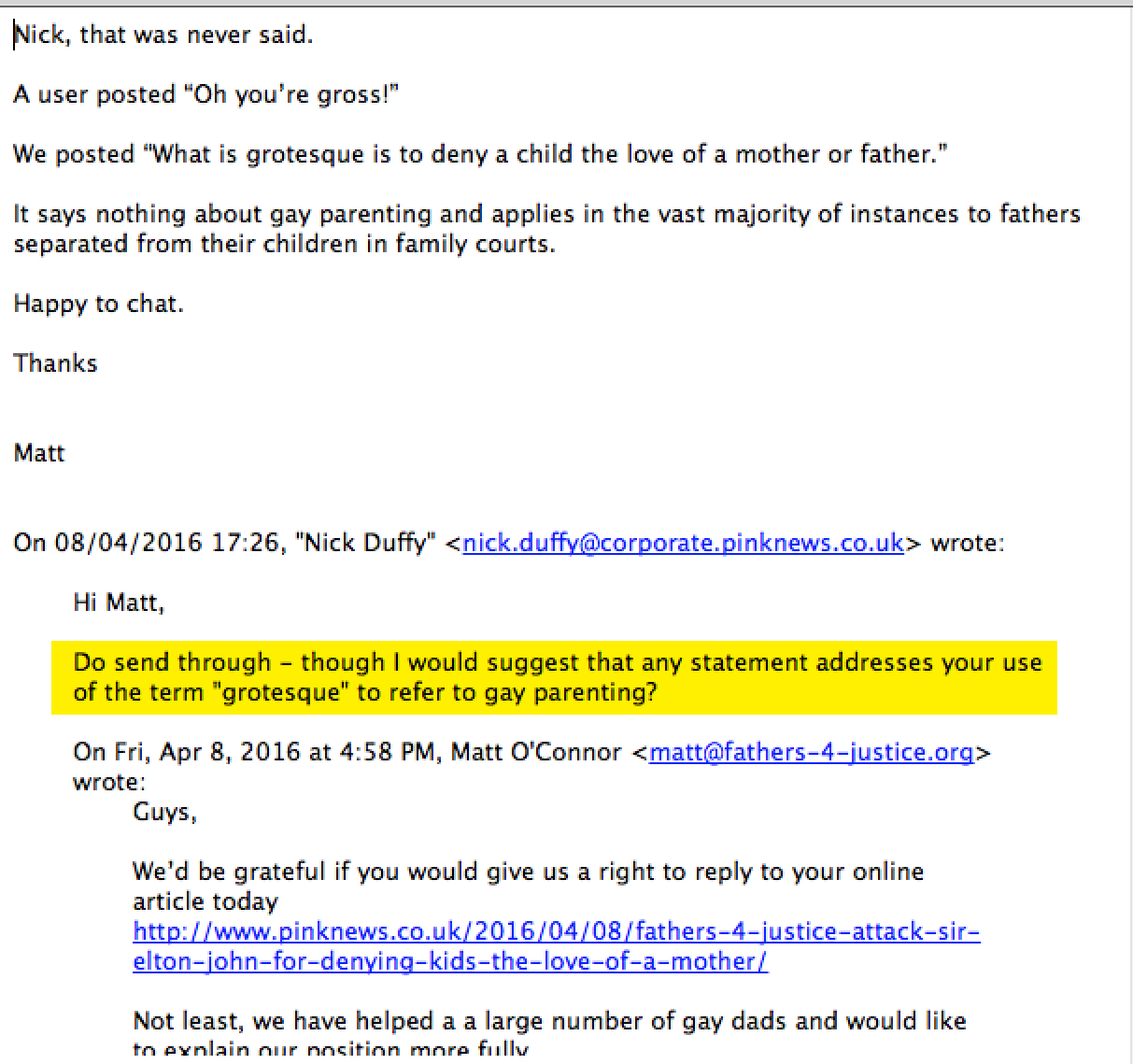 Please find our response to your article of Friday 8th April 2016 http://www.pinknews.co.uk/2016/04/08/fathers-4-justice-attack-sir-elton-john-for-denying-kids-the-love-of-a-mother/

Regrettably, you gave us no right to reply before publishing your story, which contains numerous inaccuracies.

Firstly, at no time did we “attack Sir Elton John for his grotesque family set up.”

We posted a tweet that stated “What happens to kids if #EltonJohn & David Furnish split over tabloid story? Boys already denied love of a mother.”

You reported that this referred to an harassment suit against Sir Elton. This is incorrect.

It referred to the story about Elton John’s family life in the United States and what may happen if the couple separate as a result.

For example, what would happen if the couple found themselves in a custody battle over their children in the family courts, an area we are very familiar with. Such a scenario would be a matter for public debate.

You then falsely state that our campaign claims, “dads should have an absolute right under law to custody of their children.” This is incorrect.

We campaign for a presumption of shared parenting, where both a mother and father are involved in the raising of their children in the event they separate.

When challenged over our position on Twitter, an individual posted, “Oh you’re gross!”

In response, we posted, “What is grotesque is to deny a child the love of a mother or father.”

This post says nothing about gay parenting and applies in the vast majority of instances to fathers separated from their children in family courts.

Not only did you misrepresent Fathers4Justice and our position – detailed in full below – but you sent an email in response to our request for a right to reply stating, “I would suggest that any statement addresses your use of the term “grotesque” to refer to gay parenting?”

For the record, we have never referred to gay parenting as “grotesque” and to claim this is a serious misrepresentation of our position.

For the purpose of clarity, our position is as follows:

1. Like many feminists and those in the LGBT community, Fathers4Justice opposes surrogacy.

4. Countries like Sweden are now considering a complete ban on surrogacy.

5. Further, the trade in surrogacy is cruel and degrading, and often exploits poor and vulnerable women in third world countries.

6. As a campaign group we have helped countless gay parents cruelly separated from their children since our foundation in 2001, and where in many cases, their sexuality has been used against them. To suggest that our opposition to surrogacy makes us homophobic is as absurd as it is offensive.

7. Fathers4Justice campaigns for equal love and equal parenting: every child deserves both parents whether they are straight, gay, lesbian or transgender.

8. In the case of adoption and fostering, we know and support many gay families whose love is essential to the well-being and development of children who would otherwise be in state care.

9. However, Fathers4Justice opposes the deliberate creation of fatherless or motherless families, whether through the family courts or through surrogacy.

10. We campaign for a child’s human rights to the love and care of both parents.

11. These are fundamental human rights, enshrined in all Human Rights legislation including Article 16 Universal Declaration of Human Rights, Article 8 European Convention on Human Rights and Article 9, United Nations Convention on the Rights of the Child which states that a child shall not be separated from his or her parents.

12. By legally erasing biological parents, we separate children from half their genetic heritage, half their biological family and deny them their right to know who they are, as already happens to children separated from their fathers in the secret family courts.

We hope you provide us with a right to reply to your article.