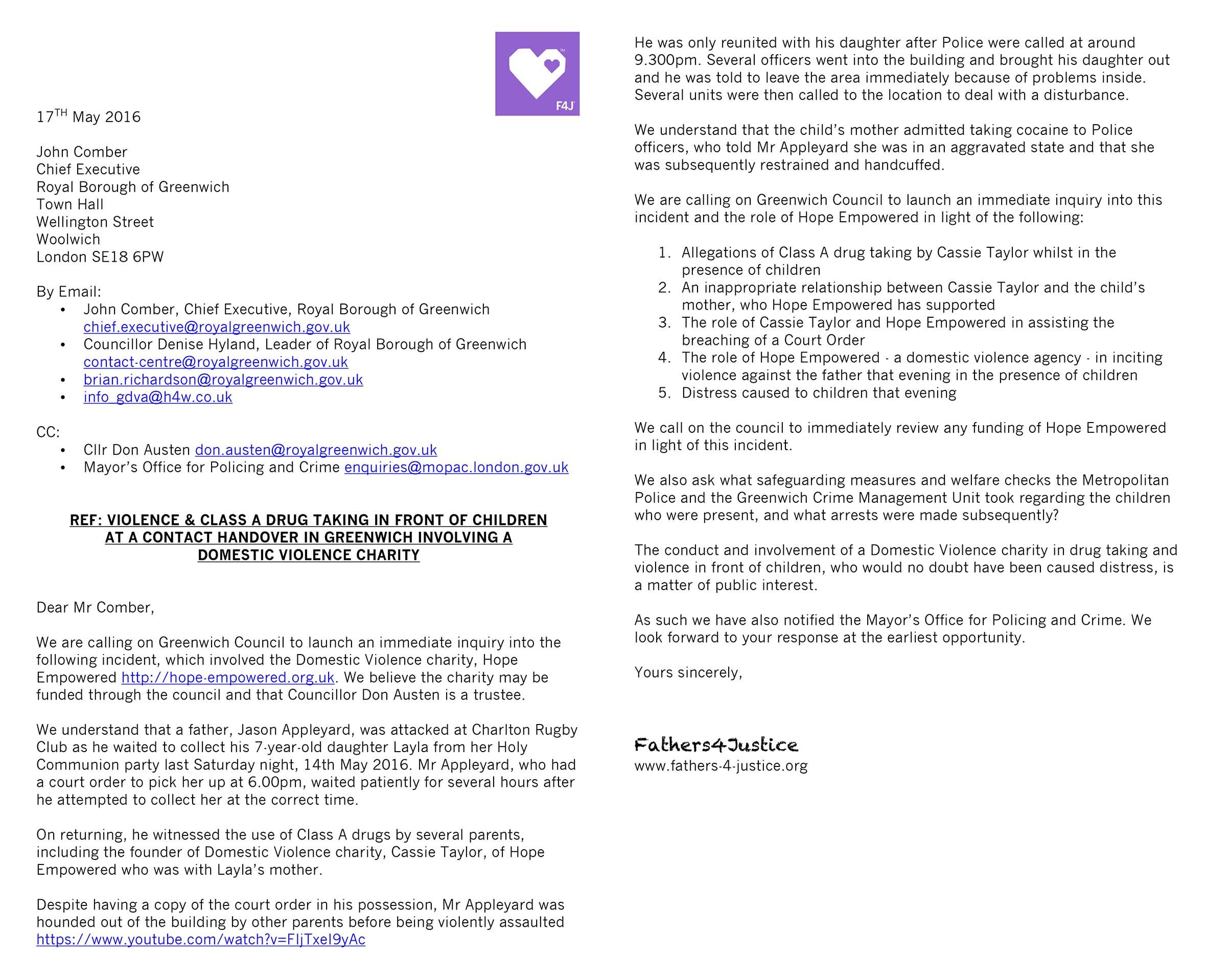 REF: VIOLENCE & CLASS A DRUG TAKING IN FRONT OF CHILDREN AT A CONTACT HANDOVER IN GREENWICH INVOLVING A DOMESTIC VIOLENCE CHARITY

We are calling on Greenwich Council to launch an immediate inquiry into the following incident, which involved the Domestic Violence charity, Hope Empowered http://hope-empowered.org.uk. We believe the charity may be funded through the council and that Councillor Don Austen is a trustee.

We understand that a father, Jason Appleyard, was attacked at Charlton Rugby Club as he waited to collect his 7-year-old daughter Layla from her Holy Communion party last Saturday night, 14th May 2016. Mr Appleyard, who had a court order to pick her up at 6.00pm, waited patiently for several hours after he attempted to collect her at the correct time.

On returning, he witnessed the use of Class A drugs by several parents, including the founder of Domestic Violence charity, Cassie Taylor, of Hope Empowered who was with Layla’s mother.

Despite having a copy of the court order in his possession, Mr Appleyard was hounded out of the building by other parents before being violently assaulted https://www.youtube.com/watch?v=FIjTxeI9yAc

He was only reunited with his daughter after Police were called at around 9.300pm. Several officers went into the building and brought his daughter out and he was told to leave the area immediately because of problems inside. Several units were then called to the location to deal with a disturbance.

We understand that the child’s mother admitted taking cocaine to Police officers, who told Mr Appleyard she was in an aggravated state and that she was subsequently restrained and handcuffed.

We are calling on Greenwich Council to launch an immediate inquiry into this incident and the role of Hope Empowered in light of the following:

We call on the council to immediately review any funding of Hope Empowered in light of this incident.

We also ask what safeguarding measures and welfare checks the Metropolitan Police and the Greenwich Crime Management Unit took regarding the children who were present, and what arrests were made subsequently?

The conduct and involvement of a Domestic Violence charity in drug taking and violence in front of children, who would no doubt have been caused distress, is a matter of public interest.

As such we have also notified the Mayor’s Office for Policing and Crime. We look forward to your response at the earliest opportunity.