The Gallo way: Yin and Yang, mother and father. By John Waters. The Village Magazine, May 2016. Ireland’s political and cultural magazine. 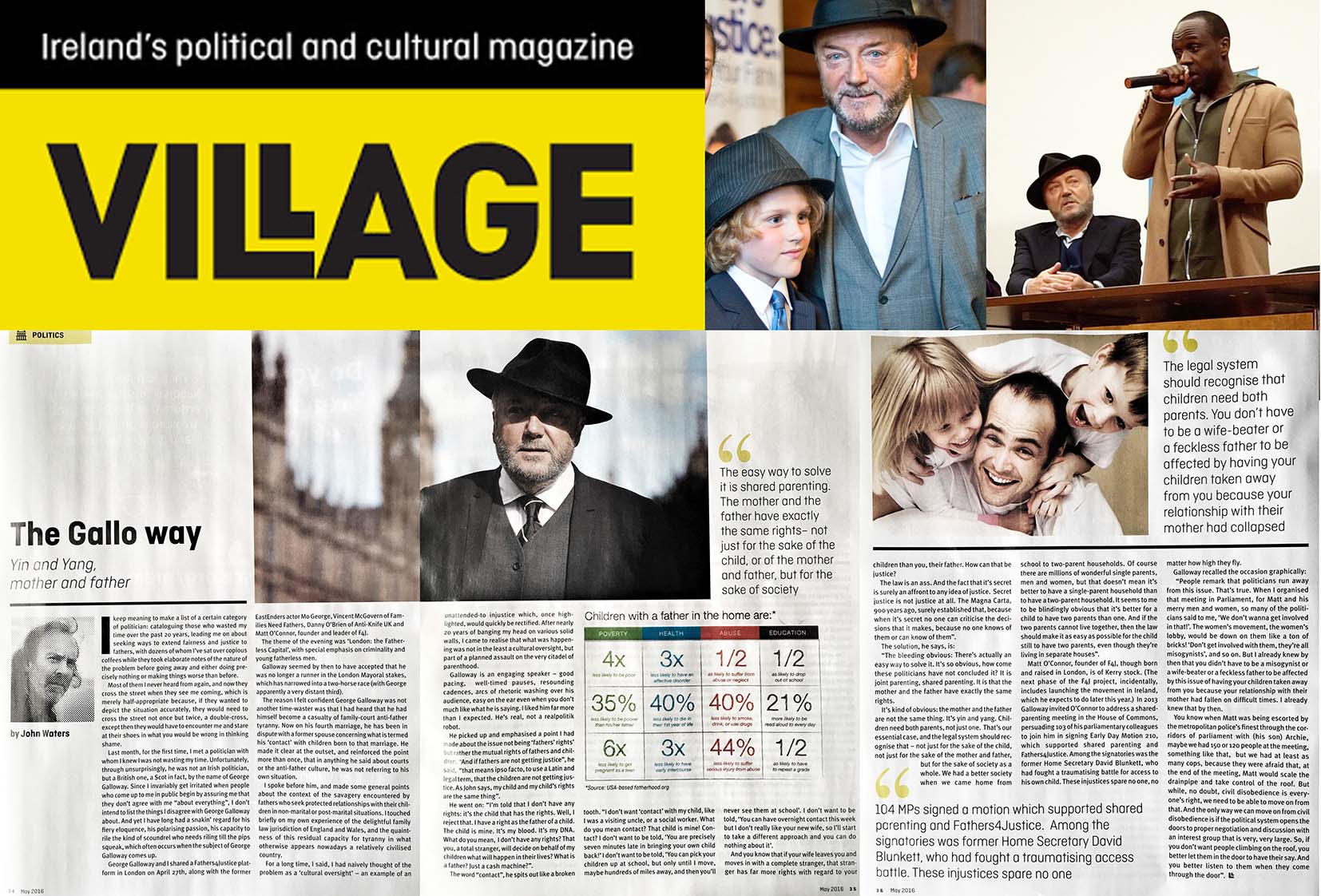 “104 MPs signed a motion which supported shared parenting and Fathers4Justice. Among the signatories was former Home Secretary David Blunkett, who had fought a traumatising access battle. These injustices spare no one.”

I keep meaning to make a list of a certain category of politician: cataloguing those who wasted my time over the past 20 years, leading me on about seeking ways to extend fairness and justice to fathers, with dozens of whom I’ve sat over copious coffees while they took elaborate notes of the nature of the problem before going away and either doing precisely nothing or making things worse than before.

Most of them I never heard from again, and now they cross the street when they see me coming, which is merely half-appropriate because, if they wanted to depict the situation accurately, they would need to cross the street not once but twice, a double-cross, except then they would have to encounter me and stare at their shoes in what you would be wrong in thinking shame.

Last month, for the first time, I met a politician with whom I knew I was not wasting my time. Unfortunately, through unsurprisingly, he was not an Irish politician, but a British one, a Scot in fact, by the name of George Galloway. Since I invariably get irritated when people who come up to me in public begin by assuring me that they don’t agree with me “about everything”, I don’t intend to list the things I disagree with George Galloway about. And yet I have long had a snakin’ regard for his fiery eloquence, his polarising passion, his capacity to rile the kind of scoundrel who needs riling till the pips squeak, which often occurs when the subject of George Galloway comes up.

George Galloway and I shared a Fathers4Justice platform in London on April 27th, along with the former EastEnders actor Mo George, Vincent McGovern of Families Need Fathers, Danny O’Brien of Anti-Knife UK and Matt O’Connor, founder and leader of F4J.

The theme of the evening was ‘London: the Fatherless Capital’, with special emphasis on criminality and young fatherless men.

Galloway seemed by then to have accepted that he was no longer a runner in the London Mayoral stakes, which has narrowed into a two-horse race (with George apparently a very distant third).

The reason I felt confident George Galloway was not another time-waster was that I had heard that he had himself become a casualty of family-court anti-father tyranny. Now on his fourth marriage, he has been in dispute with a former spouse concerning what is termed his ‘contact’ with children born to that marriage. He made it clear at the outset, and reinforced the point more than once, that in anything he said about courts or the anti-father culture, he was not referring to his own situation.

I spoke before him, and made some general points about the context of the savagery encountered by fathers who seek protected relationships with their children in non-marital or post-marital situations. I touched briefly on my own experience of the delightful family law jurisdiction of England and Wales, and the quaintness of this residual capacity for tyranny in what otherwise appears nowadays a relatively civilised country.

For a long time, I said, I had naively thought of the problem as a ‘cultural oversight’ – an example of an unattended-to injustice which, once highlighted, would quickly be rectified. After nearly 20 years of banging my head on various solid walls, I came to realise that what was happening was not in the least a cultural oversight, but part of a planned assault on the very citadel of parenthood.

Galloway is an engaging speaker – good pacing, well-timed pauses, resounding cadences, arcs of rhetoric washing over his audience, easy on the ear even when you don’t much like what he is saying. I liked him far more than I expected. He’s real, not a realpolitik robot.

He picked up and emphasised a point I had made about the issue not being ‘fathers’ rights’ but rather the mutual rights of fathers and children. “And if fathers are not getting justice”, he said, “that means ipso facto, to use a Latin and legal term, that the children are not getting justice. As John says, my child and my child’s rights are the same thing”.

He went on: “I’m told that I don’t have any rights: it’s the child that has the rights. Well, I reject that. I have a right as the father of a child. The child is mine. It’s my blood. It’s my DNA. What do you mean, I don’t have any rights? That you, a total stranger, will decide on behalf of my children what will happen in their lives? What is a father? Just a cash machine?”.

And you know that if your wife leaves you and moves in with a complete stranger, that stranger has far more rights with regard to your children than you, their father. How can that be justice?

The law is an ass. And the fact that it’s secret is surely an affront to any idea of justice. Secret justice is not justice at all. The Magna Carla, 900 years ago, surely established that, because when it’s secret no one can criticise the decisions that it makes, because no one knows of them or can know of them”.

The solution, he says, is: “The bleeding obvious: There’s actually an easy way to solve it. It’s so obvious, how come these politicians have not concluded it? It is joint parenting, shared parenting. It is that the mother and the father have exactly the same rights.

It’s kind of obvious: the mother and the father are not the same thing. It’s yin and yang. Children need both parents, not just one. That’s our essential case, and the legal system should recognise that – not just for the sake of the child, not just for the sake of the mother and father, but for the sake of society as a whole. We had a better society when we came home from school to two-parent households. Of course there are millions of wonderful single parents, men and women, but that doesn’t mean it’s better to have a single-parent household than to have a two-parent household. It seems to me to be blindingly obvious that it’s better for a child to have two parents than one. And if the two parents cannot live together, then the law should make it as easy as possible for the child still to have two parents, even though they’re living in separate houses”.

Matt O’Connor, founder of F4J, though born and raised in London, is of Kerry stock. (The next phase of the F4J project, incidentally, includes launching the movement in Ireland, which he expects to do later this year.) In 2013 Galloway invited O’Connor to address a shared parenting meeting in the House of Commons, persuading l03 of his parliamentary colleagues to join him in signing Early Day Motion 210, which supported shared parenting and Fathers4Justice. Among the signatories was the former Home Secretary David Blunkett, who had fought a traumatising battle for access to his own child. These injustices spare no one, no matter how high they fly.

Galloway recalled the occasion graphically: “People remark that politicians run away from this issue. That’s true. When I organised that meeting in Parliament, for Matt and his merry men and women, so many of the politicians said to me, ‘We don’t wanna get involved in that!’. The women’s movement, the women’s lobby, would be down on them like a ton of bricks! ‘Don’t get involved with them, they’re all misogynists’, and so on. But I already knew by then that you don’t have to be a misogynist or a wife-beater or a feckless father to be affected by this issue of having your children taken away from you because your relationship with their mother had fallen on difficult times. I already knew that by then.

You know when Matt was being escorted by the metropolitan police’s finest through the corridors of parliament with (his son) Archie, maybe we had 150 or 120 people at the meeting, something like that, but we had at least as many cops, because they were afraid that, at the end of the meeting, Matt would scale the drainpipe and take control of the roof.

But while, no doubt, civil disobedience is everyone’s right, we need to be able to move on from that. And the only way we can move on from civil disobedience is if the political system opens the doors to proper negotiation and discussion with an interest group that is very, very large. So, if you don’t want people climbing on the roof, you better let them in the door to have their say. And you better listen to them when they come through the door”.

“The legal system should recognise that children need both parents. You don’t have to be a wife-beater or a feckless father to be affected by having your children taken away from you because your relationship with their mother had collapsed.”