The Telegraph: 10 years on: how #Fathers4Justice almost wrecked the National Lottery 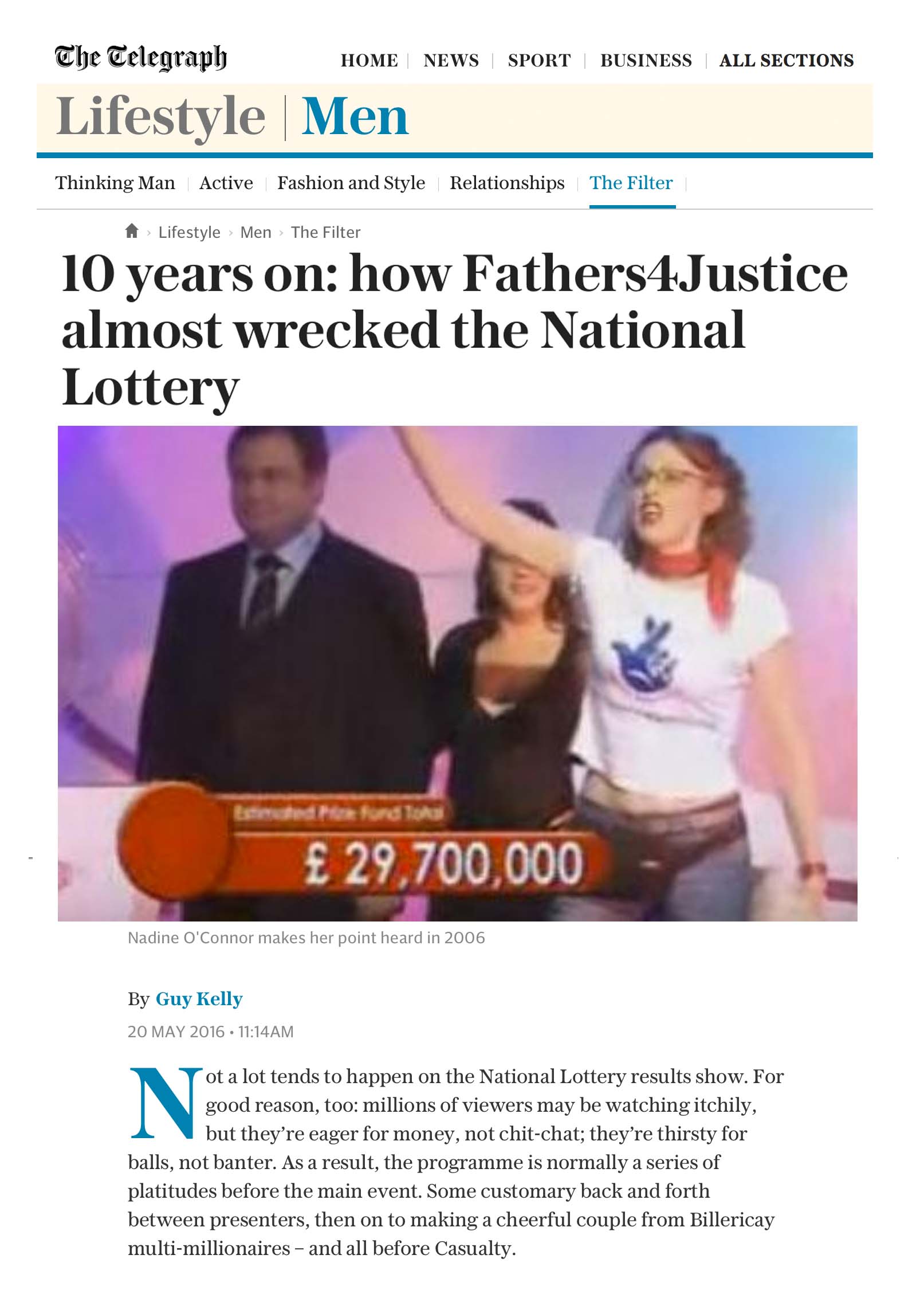 Not a lot tends to happen on the National Lottery results show. For good reason, too: millions of viewers may be watching itchily, but they’re eager for money, not chit-chat; they’re thirsty for balls, not banter. As a result, the programme is normally a series of platitudes before the main event. Some customary back and forth between presenters, then on to making a cheerful couple from Billericay multi-millionaires – and all before Casualty.

Week in, week out. It’s a bulletproof formula.

Exactly ten years ago today, however, just as Eamonn Holmes and co-presenter Sarah Cawood settled in to follow that plan on the National Lottery Jetset, five men and one woman from Fathers4Justice, the paternal rights group, decided to disrupt things in the most eye-catching way possible. The bubble burst. Chaos reigned, briefly. And it was spectacular.

We all remember it. Like hearing of Princess Diana’s death or watching the moon landings, everybody can recall where they were and what they were doing when Eamonn Holmes used Sarah Cawood as a human shield live on BBC One. The sofa, probably, watching the lottery.

A decade on, you’d be right to ask the question: what on earth happened there?

“We’d been thinking about it for a while, and about a month earlier sent in a couple of people to recce it,” remembers Matt O’Connor, the founder of Fathers4Justice, who masterminded the stunt from a nearby hotel since he was under police surveillance at the time. Instead, six other active members of his group took on the challenge.

“We knew the layout of the studio, the format and how the studio ran, so could choose an optimum moment to stage a protest,” O’Connor, now 49, says. “Earlier we’d done the purple powder agitprop stunt with Tony Blair [in 2004, when protesters from the group threw flour bombs at the then Prime Minister in parliament], but wanted to do something on live TV, and the lottery happened in front of 11 million people.

“Our basic principle is raising awareness of an important issue, and we were always looking at different PR techniques. We revel in the absurdity of what we’re doing as family law is such a troubling issue.”

With O’Connor holed up in wait, the chosen half dozen met in central London that Saturday morning, 20th May 2006, before making their way to BBC studio, breezing through near non-existent security and taking separate seats dotted around the audience. Then, as the show started, all they had to do was wait for an opportune moment.

It came just before the balls were due to be released.

And there the disruption began. In the clip Cawood is seen pausing, her eyes flitting away from the autocue for a moment as shouting comes from behind the camera and bodies cross the screen. With quite superhuman professionalism, she powered on.

Then for the best bit. As the melee escalates, with protesters smashing here and there and yelling inaudibly, Eamonn Holmes scampers behind Cawood to cower auspiciously. Watch closely and for a split second you’ll see Holmes’s petrified eyes meet the screen. He looks like a kid caught in a bar fight.

(Meanwhile, the ‘Voice of the Balls’ announcer Alan Dedicoat showed precisely how he gained that nickname, intoning menacingly that there was “a gentlemen who’s going to disappear rather quickly.”)

Eamonn Holmes declined to share his memories for this article, possible due to a busy work schedule. Or perhaps he just doesn’t remember it. Either way, Cawood does.

“Every time I see Eamonn I remind him of that and we laugh,” Cawood says, looking back on what she says is a standout moment in her presenting career. “I wanted to carry on – it was Eurovision night, so the draw had to be done on time or we’d delay the whole of Europe – and I was furious. Terrified and confused by what was going on, like everyone, but also angry. Hell hath no fury like TV talent denied their limelight, I tell you. I remember thinking, ‘Do not swear. Do not swear.’ Then this woman just launched herself at me. There were flares going off, it could have been anything.”

The woman in question was Nadine O’Connor, Matt O’Connor’s wife. Nobody quite expected a female Fathers4Justice protester, so her path to the set was easy.

“I remember at the time being incredibly calm,” says Nadine, now 44. “We were sat on very tiered seating and came from different directions. I was the last to go, and because I had the white T-shirt on I think a lot of people thought I was staff. I just walked through everybody and onto the stage as the kerfuffle happened. People were rolling around in front of me. Sarah Cawood was giving me short shrift, but Eamonn Holmes was lovely. He left very swiftly.”

Unbeknownst to most watching (including the protesters), the biggest concern was the lottery machine itself. If anybody other than the machine’s 24-hour security guards ever touch it, that week’s draw is assumed to have been tampered with and thus declared void, disappointing millions of ticket buyers. Naturally, then, the careering group of placard-waving, enraged activists hurtling towards them soon felt the full force of Camelot’s finest knights.

“The guys standing next to the machine were ex-SAS, so they took out the guys going for the button,” Cawood recalls. “I tried to style it out, thinking they’d clear them, but we were pretty overrun.”

As Cawood – who says her only other comparable live TV experience was dealing with Mel B saying “w***er” on Live and Kicking in the 90s – stayed, Holmes took leave of the situation. Nadine, having stood in front of the camera to shout her message, was soon sent in the same direction by Cawood (“Go on, get lost!” we saw her being told).

“Eamonn and I walked out together, straight off the stage and out of the building,” Nadine says. “He was very nice and sympathetic to our cause. I then caught the eye of one of the other Fathers4Justice guys. We just held hands and walked out of the building, jumped on the Underground and off we went. Nobody stopped us. It was quite surreal.”

At that point the live footage cuts to a holding screen, with Dedicoat left to expertly fill the silence for two minutes as bodies were scraped from the floor and order restored.

Holmes and Cawood reappear a short time later, dusting their hands in mock recovery as the audience cheers. “Well, that sorted them out!” Holmes giggles.

No charges were brought against any of the protesters, and all six walked out of the studio with about as much trouble as they had getting in. Rightly, Cawood later won praise for her handling of the situation.

“I received a lovely email from the Director General at the time,” she says. “And I was on the news that night. I got a lot of brownie points, though they did end my contract six months later… Still, I suppose this was a brief moment in my career that will always be there.”

The lottery has never been broadcast in front of a live audience since, switching to a private studio from the next week onwards. BBC security has ramped up, too, making the stunt unlikely to ever be repeated.

“Our job is to get publicity,” says O’Connor, who also runs a ice cream brand with Nadine. “This was just one of a cannon of protests that got attention at the time. Actually my son rang me that weekend and said, ‘Dad, I think there should be more rugby tackling on the lottery. It was a lot more interesting than normal’ – which was true.”

Within a minute of the screen returning to the studio, Eamonn Holmes finally dropped the balls. It didn’t matter, though. Fathers4Justice had made their point, nobody was harmed, and the audience had witnessed possibly the greatest drama in BBC history. That night, ten years ago, we all won the lottery. Sort of.