Irish Daily Star: Rose protestor Matt O’Connor did us all a favour 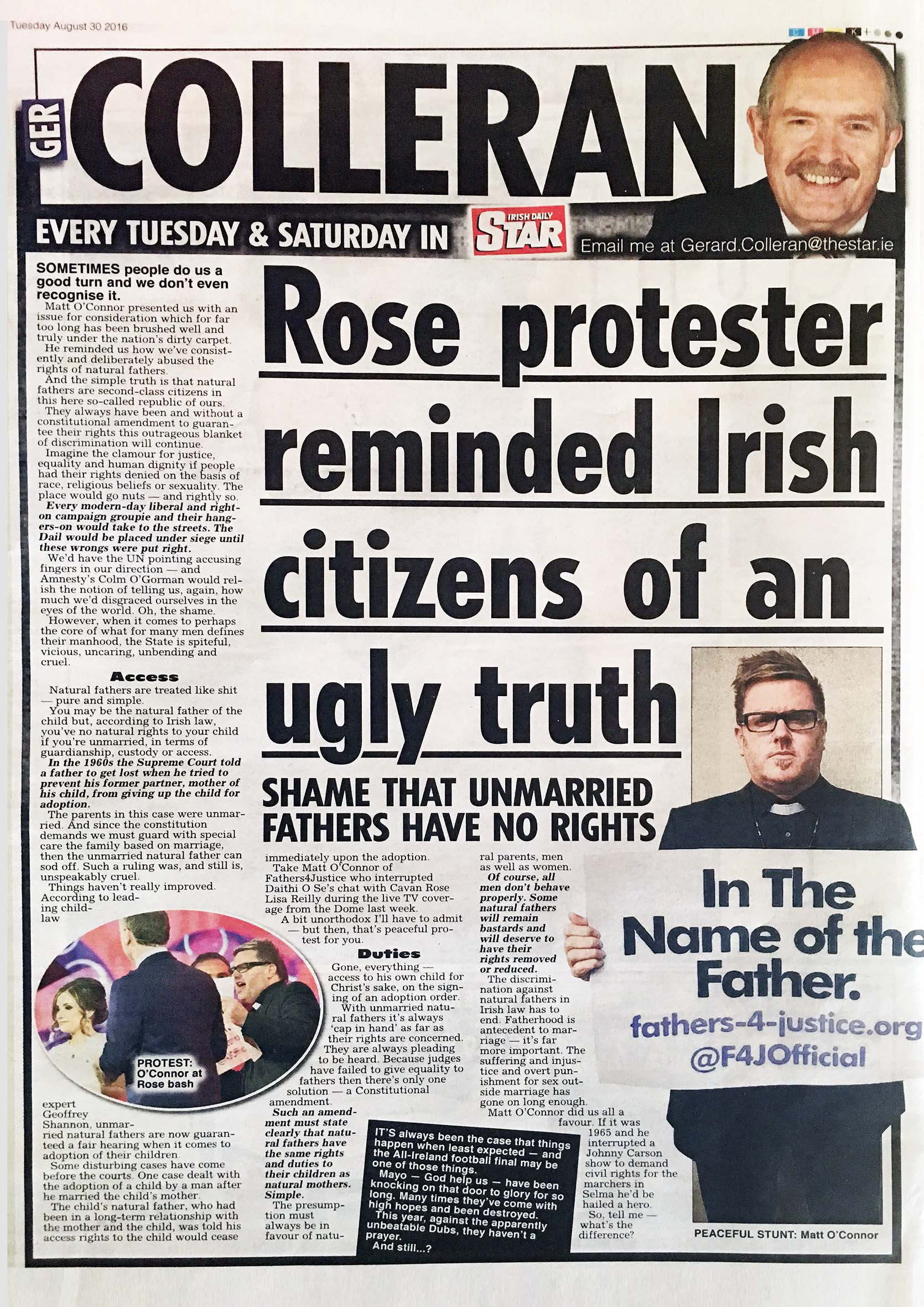 Sometimes people do us a good turn and we don’t even recognise it.

Matt O’Connor presented us with an issue for consideration which for far too long has been brushed well and truly under the nation’s dirty carpet.

He reminded us how we’ve consistently and deliberately abused the rights of natural fathers.

And the simple truth is that natural fathers are second-class citizens in this here so-called republic of ours.

They always have been and without a constitutional amendment to guarantee their rights this outrageous blanket of discrimination will continue.

Imagine the clamour for justice, equality and human dignity if people had their rights denied on the basis of race, religious beliefs or sexuality. The place would go nuts – and rightly so.

Every modern-day liberal and right-on campaign groupie and their hangers-on would take to the streets. The Dail would be placed under siege until these wrongs were put right.

We’d have the UN pointing accusing fingers in our direction – and Amnesty’s Colm O’Gorman would relish the notion of telling us, again, how much we’d disgraced ourselves in the eyes of the world. Oh, the shame.

However, when it comes to perhaps the core of what for many men defines their manhood, the State is spiteful, vicious, uncaring unbending and cruel.

Natural fathers are treated like shit – pure and simple.

You may be the natural fathers of the child but, according to Irish law, you’ve no natural rights to your child if you’re unmarried, in terms of guardianship, custody or access.

In the 1960’s the Supreme Court told a father to get lost when he tried to prevent his former partner, mother of his child, from giving up the child for adoption.

The parents in this case were unmarried. And since the constitution demands we must guard with special care the family based on marriage, then the unmarried natural father can sod off. Such a ruling was, and still is, unspeakably cruel.

Things haven’t really improved. According to leading child-law expert Geoffrey Shannon, unmarried natural fathers are now guaranteed a fair hearing when it comes to adoption of their children.

Some disturbing cases have come before the courts. One case dealt with the adoption of a child by a man after he married the child’s mother.

The child’s natural father, who had been in a long-term relationship with the mother and the child, was told his access rights to the child would cease immediately upon the adoption.

A bit unorthodox I’ll have to admit – but then, that’s peaceful protest for you.

Gone, everything – access to his own child for God’s sake, on the signing of an adoption order.

With unmarried natural fathers it’s always ‘cap in hand’ as far as their rights are concerned. They are always pleading to be heard. Because judges have failed to give equality to fathers then there’s only one solution – a Constitutional amendment.

Such an amendment must state clearly that natural fathers have the same rights and duties to their children as natural mothers. Simple.

The presumption must always be in the favour of natural parents, men as well as women.

Of course, all men don’t behave properly. Some natural fathers will remain bastards and will deserve to have their rights removed or reduced.

The discrimination against natural fathers in Irish law has to end. Fatherhood is antecedent to marriage – it’s far more important. The suffering and injustice and overt punishment for sex outside marriage has gone on long enough.

Matt O’Connor did us all a favour. If it was 1965 and he interrupted a Johnny Carson show to demand civil rights for the marchers in Selma he’d be hailed a hero.

So tell me what’s the difference?