The London Economic: The Shocking Cost of Fatherlessness in the UK 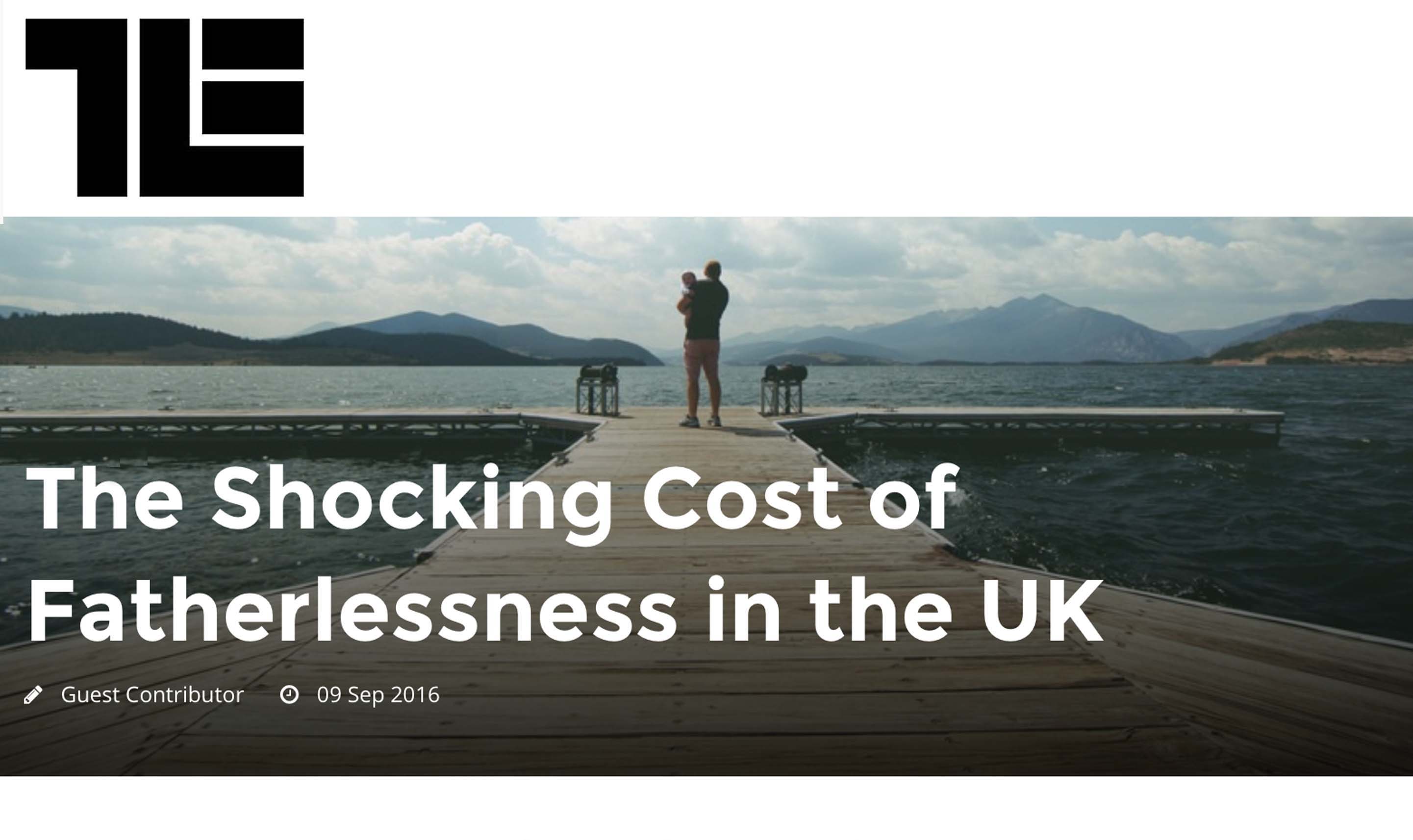 While the debate around the fatherless society is normally framed by emotional and legal arguments, few have considered the seismic impact this has on our economy.

The devastating cancer of family breakdown and fatherlessness isn’t just laying waste to families, it also comes at a punitive human and economic cost to employers and the taxpayer.

The numbers involved are jaw dropping.

More than our defence budget

According the Relationships Foundation ‘Cost of Family Failure Index’, the economic cost of family breakdown in 2016 was £48bn or £1,820 for every taxpayer.

Some claim the costs are even higher. In 2010, Iain Duncan Smith estimated the costs to society as a whole through truancy, anti-social behaviour, teenage crime, addiction, depression, lost productivity and tax revenues to be £100bn.

Even allowing for the paucity of research and the difficulty in quantifying the true financial cost of family breakdown, if you add the human cost to the economic cost, you have something which by any definition is a full-blown crisis.

Fathers are three times more likely to die after separation than mothers, and suicide is now the biggest killer of men under 50.

The inescapable and statistical reality is that most families are likely to experience the pain of family breakdown at some point in their lives.

In 2010 the Office for National Statistics reported in their Labour Force Survey that 3.8 million children did not live with one or other parent. Unsurprisingly, the parent most children do not live with, is their father. The ONS reported in 2014 that women accounted for 91% of lone parents with dependent children.

Family breakdown is bad for business

Employers are left to manage the consequences of this unstoppable trend with little or no guidance from government. For small businesses the impact can be crippling.

Staff can be deeply affected by the trauma of divorce and separation whilst in the workplace, which in turn leads to sickness and absenteeism as they struggle to cope with the legal and emotional fallout.

According to one survey, one individual in 10 going through separation has had to leave their job after a split. A further 16% of respondents have seen their workplace hit by sick leave following the stress of a break-up and 15% said relationship breakdown had a negative impact on productivity.

But isn’t just families and businesses affected by the impact of family breakdown, it’s our communities.

According to the Centre for Social Justice in 2011, 62% of families in Camden, London, had no father, and a further 236 areas across England and Wales had at least 50% of households consisting of families where there was no dad present.

These “men deserts” have become a fertile breeding ground for gang violence. In 2015, 15 teenagers were killed in knife attacks in London and there were 6,200 victims of serious youth violence.

According to David Lammy MP, of the 19 young offenders arrested in Tottenham after the 2011 riots, only two had active dads.

In 2010, the cost of young offending was put at £11 billion by the National Audit Office, with reoffending rates in 2013/14 at the highest level for more than a decade. In 2007 the Centre for Social Justice reported that 70% of young offenders came from broken homes.

The removal of fathers from families, or what author Warren Farrell calls “dad deprivation,” has created a lost generation of angry, resentful young men, vulnerable to destructive alpha male father figures like the local gang leader or drug dealer.

Men have also been alienated from our education system, to the point where one in four primary schools has no male teacher and 80% have fewer than three.

Chris McGovern, chairman of the Campaign for Real Education, recently said that the gap between boys and girls was a ‘major cause for concern’. According to government figures released last month, the majority of boys left primary school without having reached basic standards in reading, writing, science and maths.

Farrell says that dad-deprived boys are likely to have low self esteem, fewer friends, and are likely to do worse in every single academic area.

Many speculate that this is down to the lack of male role models for boys to aspire to and the need for single-sex education in primary schools to help close a gap which will have detrimental impact on the skills set of a future labour force.

You would think in light of the evidence, the government would be doing everything it could to help keep families together. Nothing could be further from the truth.

Not only is our Dickensian family justice system in breakdown itself, but in the wake of dramatic legal aid cuts, the courts have become arenas for legalised cage fighting between warring parents.

In 2011, the ONS reported that the cost to the taxpayer for the Family Justice System was £800 million. Yet many believe that the majority of private law cases could be resolved overnight through the introduction of automatic parental responsibility, a legal presumption of shared parenting and child support, and the strict enforcement of contact orders between children and their fathers.

Whilst research is difficult to obtain, The Times reported in 2003 that 50% of court orders are broken and not enforced, a fact that chimes with the everyday experiences of our supporters.

Further, courts are for criminals, not families.

We urgently require radical reform of our cruel, secretive and adversarial family courts to create a fair, transparent and accountable system based on the peaceful resolution of disputes, not protracted and destructive litigation.

Parental responsibilities must be underpinned by parental rights, which in turn will lead to less conflict between families and dramatically reduce the burden on the taxpayer.

The current, self-inflicted crisis is part of a wider political malaise where a wall of silence surrounding family breakdown and fatherlessness suffocates democratic debate.

Iain Duncan-Smith once told me that these issues had become a “political taboo” amongst politicians, desperate to appeal to who they believe are the largest constituency of floating voters, single mothers.

In doing so, fatherlessness has become the elephant in the room of our democracy.

By way of distraction, the government has ruthlessly demonised dads as “deadbeats”. Absent fathers have been declared as bad as “drink drivers” for cheap political capital and in the process been reduced to the status of cashpoints and sperm banks.

A tax on fatherhood

Worst still, government has turned “child support” into a tax on fatherhood, imposing a financial obligation on men who have no right to a relationship with their children.

Agencies like the Child Support Agency and its new incarnation, the Child Maintenance Service, are taxing agencies, not child support agencies. They have nothing to do with supporting children, when millions of those same kids live in fatherless homes and are being pushed into poverty by a broken system.

Indeed, Lord Justice Mostyn said in 2007 that the CSA had been the greatest failure of public administration in the history of our country, with taxpayers again left to pick up the tab for political and administrative incompetence.21

However, sensible, rational debate in many US states including Florida, Utah, Maine, Nebraska and Colorado, is leading to the introduction of mandatory shared parenting legislation.

Shared parenting is responsible parenting, and progressive legislators recognise that it will lead to better outcomes for our children, our families and our country.

Now, slowly, the currency of shared parenting is gaining political value in the UK, backed by common sense evidence that the best parent for a child is both parents.

In 2011, Fathers4Justice won the support of 104 MPs from across the political spectrum with Early Day Motion 210 backing shared parenting. The EDM was sponsored by George Galloway, and the policy later adopted by UKIP. According to a YouGov poll in 2012, 84% of the public back shared parenting.

Better still, shared parenting makes economic sense for mums who will have more time to invest in their careers and businesses, as fathers and grandparents are plugged back into the lives of their children and grandchildren.

With childcare costs rocketing, dads and grandparents also have a valuable role to play in making childcare more affordable for everyone and reducing our reliance on benefits.

It’s been 15 years since I started Fathers4Justice, but the economic argument we make for shared parenting is as powerful as the emotional case. We started as activists, but now become factivists.

When presenting the case for shared parenting to politicians they always ask how much is it going to cost. I answer by telling them how much it’s going to save.

Our current economic and social policies on family breakdown and fatherlessness are, by Einstein’s definition, insane. We keep repeating the same mistakes over and over again, and still expect a different outcome.

These policies are damaging and harmful not just to children and families, but pose a threat to the economic well-being of our country.

That’s why it’s in everyone’s interests to embrace shared parenting as a common sense economic policy that adds up for everyone.