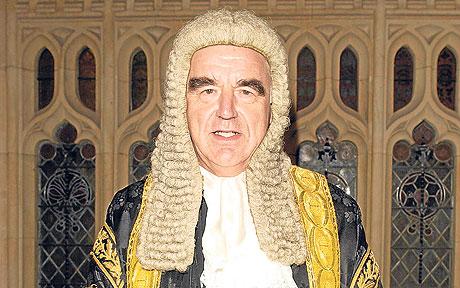 A former top family judge has killed himself after being diagnosed with dementia, his family has said.

Sir Nicholas Wall, who retired on health grounds in 2012, died last week at the age of 71 after ‘years of suffering’.

In a death notice published today, his family said the judge – who was President of the Family Division for two years until 2012 – had ‘died by his own hand’.

They added that Sir Nicholas, who was married and had four children and two grandchildren, had suffered for ‘several years’ with a rare dementia of the fronto-temporal lobe, but it had only recently been diagnosed.

The notice in the Times read: ‘Wall, Sir Nicholas Peter Rathbone, past President of the Family Division died by his own hand on 17th of February 2017, aged 71.

‘After years of suffering he was recently diagnosed with a rare dementia of the fronto-temporal lobe.’

The tribute also included a verse from Tennyson’s poem Tithonus: ‘The woods decay, the woods decay and fall/ The vapours weep their burthen to the ground/ Man comes and tills the field and lies beneath/ And after many a summer dies the swan.’

The family later released a statement, which described how Sir Nicholas had only recently received a diagnosis to explain his ill-health.

‘We are sad to confirm the death of Sir Nicholas Wall, who was not only a highly-respected former President of the Family Division but also a much-loved husband, father and grandfather,’ it read.

‘Sir Nicholas took his own life having suffered for several years from a rare neurological disease called fronto-temporal lobe dementia that had only recently been diagnosed.’

He leaves behind his wife Margaret and his children Imogen, 41, Emma, 39, Rosalind, 36, and Simon. He also had two grandsons, Joshua and Arthur.

A graduate of Trinity College, Cambridge, Sir Nicholas was called to the Bar in 1969, before being appointed a High Court Judge in the Family Division in 1993 and the Court of Appeal and Privy Council in 2004.

Sir Nicholas became president of the Family Division and head of family justice for England and Wales in April 2010.

Said Fathers4Justice founder Matt O’Connor, “The suicide of any father is a tragic event for the family concerned. Regrettably, Wall represented a generation of ‘Jurassic Judges’ who brutally and cruelly separated children from their fathers in secret courts and opposed any semblance of open justice.”