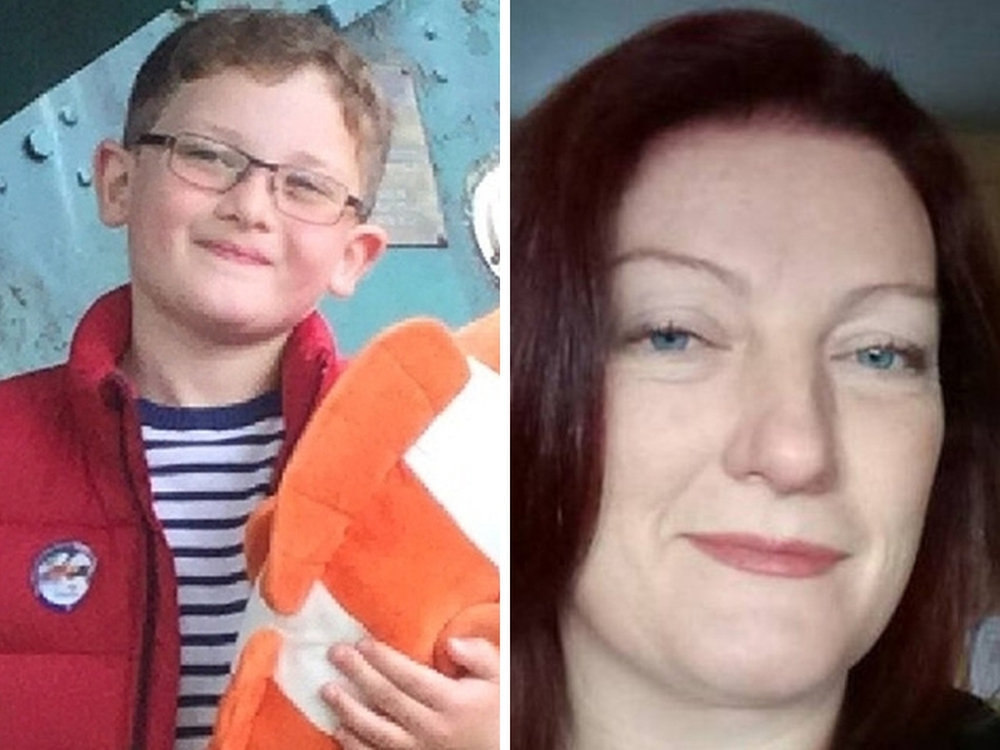 A mother murdered her seven-year-old son by strangling him with a scarf after writing letters saying she would rather he ‘be dead’ than lose him in a custody battle, a court heard.

Lesley Speed, 44, is also accused of using a cushion to smother Archie Spriggs on the same day she and her ex-partner Matthew Spriggs were due to attend a family court.

The schoolboy was found lying dead on his bunk bed by Speed’s partner, Darren Jones, at their home in Church Stretton, Shropshire, on September 21 last year. Church Stretton was the base for Fathers4Justice meetings between 2003-2005.

Speed was also found bleeding with knife wounds. She was rushed to hospital and survived and was later charged with murder.

A court heard how letters found at Speed’s home revealed that: ‘She would rather that Archie be dead than see him leave with his father.’

Birmingham Crown Court heard a recording of a 999-call he made immediately after the shock discovery, in which he said: ‘There’s blood everywhere. She’s cut herself.

According to medics, Speed claimed she ‘did not want to live anymore’ and failed to ask about Archie as she was treated for cuts to her neck, arms and wrists.

Prosecutor Sally Howes QC said: ‘It is the Crown’s case that he was murdered by his mother.

‘September 21 was the day of the family court hearing that she so dreaded.

‘She had not prepared herself for that hearing and feared that the proceedings would result in Archie being taken away from her.

‘The contents of letters found at Rushford Road were telling. She would rather that Archie be dead than see him leave with his father.’

Miss Howes also revealed that forensic tests on the scarf revealed ‘off white’ coloured stains on its fibres, which were consistent with it being ‘pulled tightly as a ligature to strangle him.’

Further analysis showed the staining suggested him ‘being pulled lengthways’, and mucus found on the cushion implied that ‘it was held over his face to asphyxiate him.’

Miss Howes added: ‘Staining on the cushion is clearly consistent with an attempt to asphyxiate him by blocking his airways which accounted for the injuries in Archie’s mouth.’

The court heard how Speed had been diagnosed with depression in 1998 and 2014.

Miss Howes said: ‘You might have heard of the legal expression diminished responsibility.

‘This is not a complete defence to a charge of murder, but if the criteria is met it is a particular defence which reduces to an offence of manslaughter.

‘You are aware of Lesley Speed’s defence that she was not responsible for the death of Archie.

‘Her case is that Archie hanged himself and took his own life.

‘But if you are sure that she did murder Archie, you are asked to consider the experts’ opinions which is that at the time of the killing she was suffering from a mental abnormality.

‘Caused by severe episode of depression with psychotic symptoms, that is a recognised medical condition.’

Jurors were told how an assessment of Speed’s mental state revealed that her level of depression was ‘moderate’.

‘I think he’s been smothered.

‘She found him hanging from his scarf. She dragged him on the bed and smothered him.’

‘I’m shocked. It was the last thing I was expecting when I came home from work.’

In the call, Mr Jones claimed that Speed was ‘stressing out’ about the forthcoming custody hearing.

Said Fathers4Justice founder Matt O’Connor: ’This is another heart-breaking tragedy linked to our cruel and barbaric family courts. No parent should feel like they may lose their child and be driven to such extremes.

‘Given our close links to Church Stretton, this tragedy has struck particularly close to home and our thoughts and prayers are with Archie’s father and family at this difficult time.’