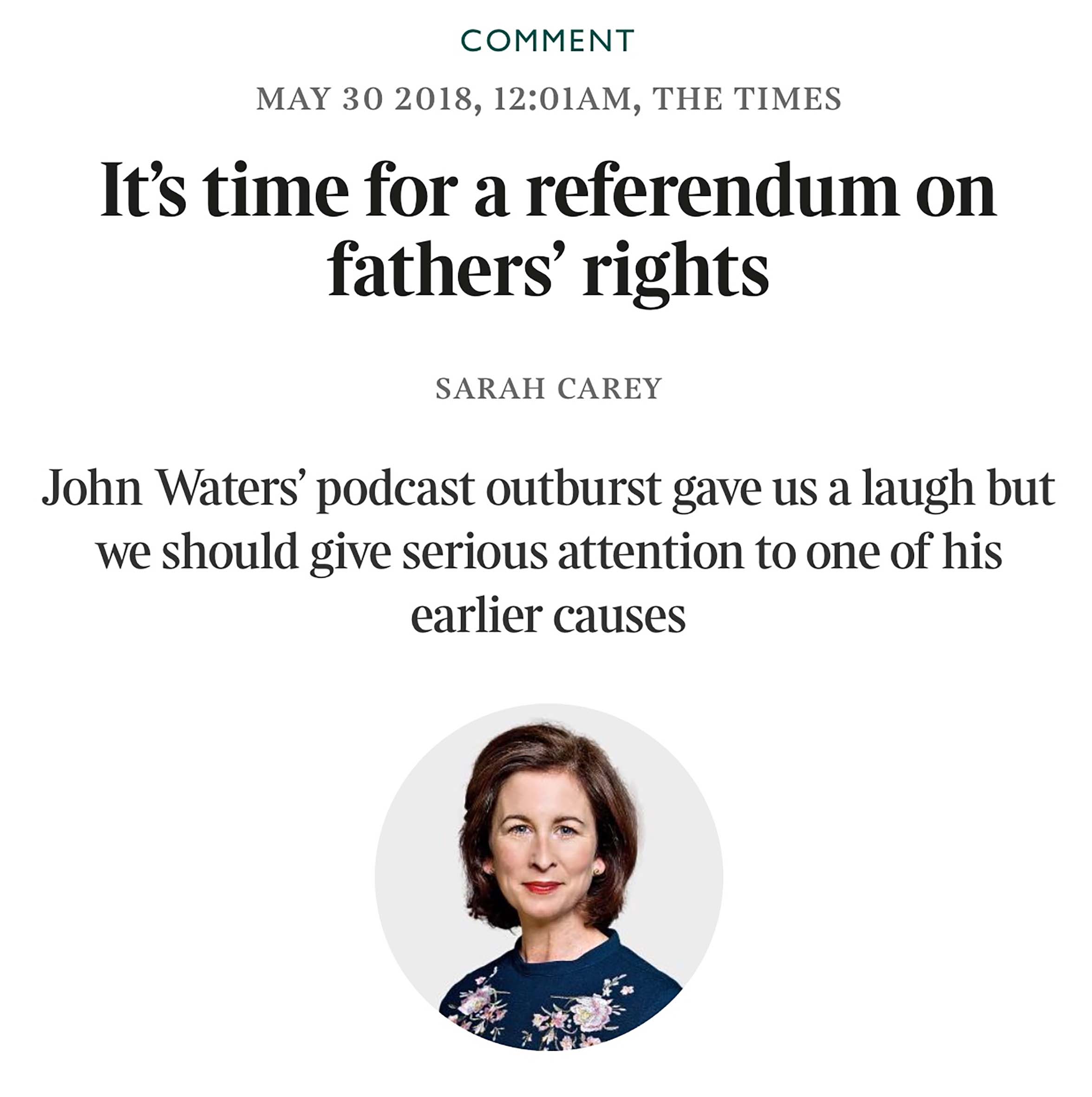 Campaign group Fathers4Justice has backed a call by Irish columnist and broadcaster Sarah Carey for a referendum on fathers’ rights in yesterdays Irish Times.

The call for a referendum – long campaigned for by Fathers4Justice – follows the abortion referendum, and comes ahead of Father’s Day on Sunday 17th June.

Said Fathers4Justice founder Matt O’Connor; “This Father’s Day will be a day of national tragedy and heartbreak once more, with hundreds of thousands of children denied access to their dads.”

“It is time for the government to ask the Irish people whether fathers should have the same parenting rights as mothers.”

It’s time for a referendum on fathers’ rights

Thank God that’s over. By the end of the abortion referendum I ended up in tears with a friend. She had voted “no”, I voted “yes”, but we both thought an abortion means a life is lost. We wept and hugged it out, but my frayed nerves will take a while to recover.

The campaign wasn’t all bad, though. The highlight for me was that spectacular row between John Waters and Eamon Dunphy. You’ll probably recall that Dunphy invited Waters to appear on his podcast The Stand the week before polling day. When Dunphy pursued a picky line of questioning about the morning-after pill, Waters stormed out, calling Dunphy a “f***ing bollocks”. Dunphy begged him not to leave, pleading that he, like Waters, was a “no” voter, but no avail. “Talk to Una Mullally. F*** off,” Waters responded.

I laughed all day and played it back a few times so I could laugh again. What made it so enjoyable was that, as my mother would say: “There was a pair of them in it.”

When I heard that Shane Ross had called Mattie McGrath an “out and out bollocks” in the Dáil restaurant the same day, why, bliss it was in that dawn to be alive. Or to quote the Irish proverb: “Aithníonn ciaróg ciaróg eile”. They’re all well able for each other.

When I stopped laughing, though, I thought about Waters. Long an advocate of fathers’ rights, he reminds me of Philoctetes, the Greek hero whose story was so superbly told in Seamus Heaney’s The Cure at Troy. Philoctetes was wounded in the Trojan wars and howled in pain at the sore in his leg. His fellow sailors couldn’t bear listening to him so they tricked him and marooned him on the island of Lemnos.

What Dunphy once labelled Official Ireland did not just ignore unmarried fathers; it held them in contempt for howling about it. Many fathers have lost their children. No one cares. No one will listen. No one will act. What is the appropriate response to that? To dump them on an island because we don’t want to listen to their pain? It’s not fair. They need a referendum and we should give it to them.

In 1966, a Greek Cypriot called Leontis Nicolaou asked the Supreme Court to stop the adoption board (An Bord Uchtála) putting his child up for adoption in line with the wishes of the mother. The court ruled that unmarried fathers had no rights to guardianship of their own children and gave the adoption board the go-ahead. That was more than 50 years ago, and the courts have continually backed up this case, even where the fathers had been involved in rearing the children.

People have often complained that men got away scot-free from their responsibilities and it was only mothers who suffered during the tyrannical years of the 20th century. When men tried to intervene, however, they didn’t get anywhere. Unmarried mothers made huge progress, but unmarried fathers got nothing.

David Langwallner, a former lecturer in constitutional law at the King’s Inns and now barrister at Great James Street Chambers in London, argues that what is happening is a “wholesale human rights violation to the destruction of fathers and children”. He argued that a United Nations special rapporteur should be sent to Ireland to examine what is going on in the family courts.

Not only did unmarried fathers never get their referendum, there isn’t the slightest sign of them getting one. We’ve had divorce, gay marriage, European Union treaties — some twice over — children’s rights, the Seanad, Dáil committees, citizenship, bail and last week abortion, for the fourth time. Every time that Waters asks “What about the referendum for fathers?” he is told to shut up and wait his turn.

Chuck Feeney funded Glen, the Gay and Lesbian Equality Network, which staged a slick and successful campaign for a gay marriage referendum. George Soros funded Amnesty International for its “My Body My Rights” abortion campaign. There seems to be a dearth of American billionaires willing to buy good PR for fathers. So the only ones left to advocate fathers’ rights are angry men who can’t afford PR consultants and lobbyists to teach them how to talk in that modulated, moderate, ultra-reasonable tone that makes my skin crawl, but which men must use in public to persuade.

The next referendum on the agenda still isn’t father’s rights, but the remainder of the troublesome Article 41, which says that the state shall “endeavour to ensure that mothers shall not be obliged by economic necessity to engage in labour to the neglect of their duties in the home”. Obviously it’s a stupid clause, but it’s also wholly irrelevant to everyday life and causes no objective grief to anyone. The lack of automatic rights for unmarried fathers has caused untold grief for decades.

I am a proud feminist but I can’t help wondering if the most ardent feminist still thinks she’s a more natural parent of the child, even as she rails against the constitutional declaration that her place is in the home.

In The Cure at Troy, Odysseus finally admits he cannot win the Trojan War without Philoctetes and returns to rescue him. It takes a while to convince the hero to rejoin those who betrayed him. He talks of his years alone on the island in pain as a kind of afterlife — ten years of being gone and being forgotten, but finally he agrees and “he leaves half ready to believe that a crippled trust might walk”. In the abortion referendum, we have listened to the voices of Irish women. It’s time now to listen to the voices of Irish men. We need to go to the island and rescue Waters, right this wrong and end another war.