The Sun: The forgotten fathers who are victims of coercive control by vengeful mothers 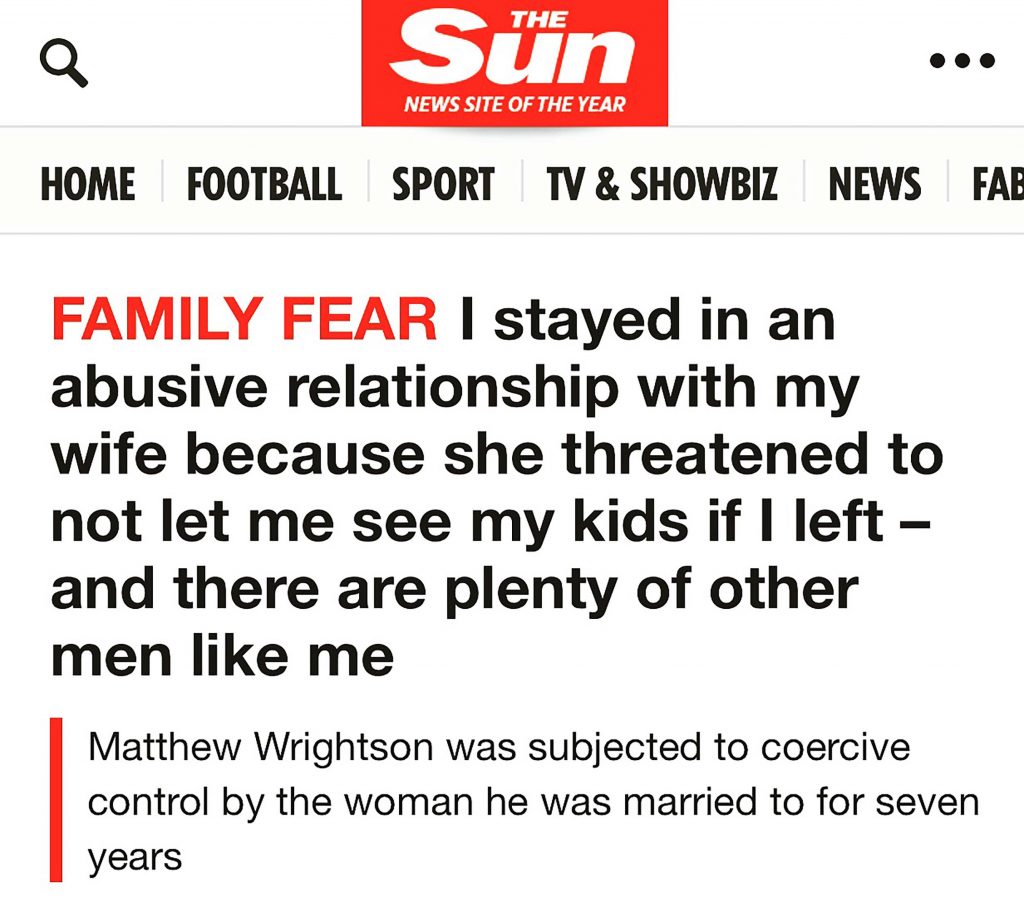 The Sun newspaper has published what is believed to be one of the first media articles highlighting the forgotten fathers who are victims of coercive control by vengeful mothers.

Said Fathers4Justice founder Matt O’Connor, “As the figures (below) show, abuse has no gender. Tens of thousands of loving dads are victims of coercive control when being denied access to their children for no good reason.”

“It is a tragic reality that many mothers ‘weaponise’ their children by controlling a father’s access to their children, which has led to an explosion in applications by dads to the family courts.”

“We call this ‘revenge parenting’, and unfortunately the law doesn’t only allow this, but it encourages it, because mothers know fathers have no legal rights to see their children, and they can act with impunity.”

“Even if a father has a court order, 50% of these are broken, and just 1.2% of these are enforced in the last year according to the Ministry of Justice. It makes a mockery of our idea of justice.”

“Worst still, this coercive behaviour extends to mums manipulating children and turning them against their dads. This is called ‘parental alienation’ which is an emerging mental health issue which may be added to the International Classification of Diseases when the World Health Organisation votes in May.”

“It’s time the courts and police recognised this and acted accordingly, not least as the most important victims here are children denied access to their dads.”

*It is common place for mothers to deny a father access to his children as another means of controlling him and in turn, the paternal grandparents.

*There are around 56,000 applications every year by dads in the family courts who are trying to see their children. These applications involve around 126,000 children.

*Fathers4Justice have over 85,000 supporters in the UK. Two thirds are men struggling to see their children, all of which have access issues to their children and we consider victims of coercive and controlling behaviour. The other third are women, mothers, aunts, grandmothers and new partners.

*More than 1/3 of men in the UK have admitted being a victim of a coercive controlling relationship.

*According to the Crime Survey for England and Wales 1 in 3 domestic abuse victims are men, affecting 2,000 men every day, yet this is massively underreported – just 1 in 20 men report domestic abuse to the Police.

*Coercive behaviour is defined as an ‘act or pattern of acts which are used to harm, punish or frighten a victim.’

Because of social stigma, and the way society treats male victims of abuse, men are almost frightened to report this. It is however slowly changing.

F4J encourage fathers and men to come forward to talk about it, not least because of our own experiences.