ComRes/Fathers4Justice survey: one third of dads won’t see their kids this Father’s Day 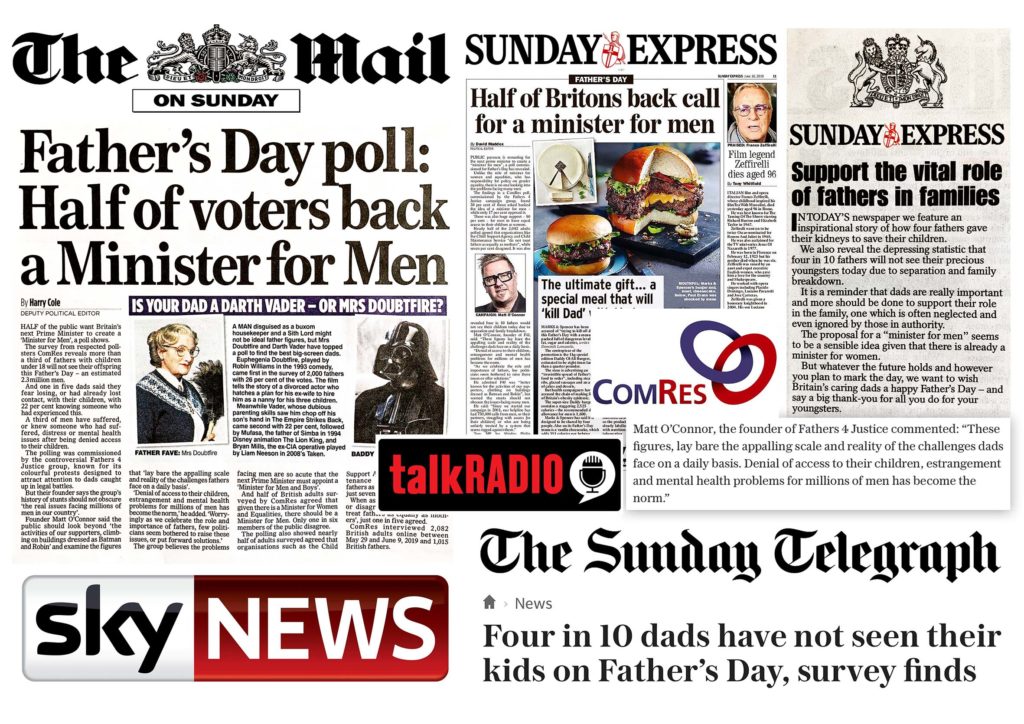 A third of dads (37 per cent) will not see their children on Father’s Day according to a major new poll from ComRes which was commissioned by Fathers4Justice.

It is the first comprehensive survey of public attitudes to fatherlessness and the family justice system undertaken in the UK.

When asked whether they, or someone they know, have experienced not seeing their children on Father’s Day, 37 per cent of fathers agreed.

If this is repeated, an estimated 2.3 million men will not see their kids.

One in five dads also said they fear losing, or had lost contact, with their children, with 22 per cent knowing someone who had experienced this.

Half of the public told ComRes they want Britain’s next Prime Minister to create a ‘Minister for Men’.

The survey, conducted between 29th May and 9th June 2019, also found the following:

* One in five dads (20%) fear losing, or had lost contact with their children, following separation.
* A third (32%) of men have suffered, or knew someone who had suffered, distress or mental health issues after being denied access to their children.
* Six in ten (60%) think mothers who break court orders giving dads access to their kids should be prosecuted, including 54% of women.
* 8 in 10 (80%) think there should be equal access for mothers and fathers to their children after separation, including 78% of women.
* Three quarters (75%) back “automatic parental responsibility” for new dads even when not married, including 74% of women.
* 43 per cent backed splitting child benefits equally between fathers and mothers.
* Half of the public (50%) back the creation of a Minister for Men, similar to the Minister for Women and Equalities, including 48% of women.
* Half agree (48%) that organisations like the Child Support Agency / Child Maintenance Service do not treat men equally.
* Just 1 in 5 (21%) agreed the family courts treat fathers as equally as mothers, while double that number (40%) disagreed.
* F4J has one of the highest rates of awareness of any UK campaign group, with 4 in 5 people (80%) aware of the campaign, compared to 89% for Amnesty International and 94% for Greenpeace. 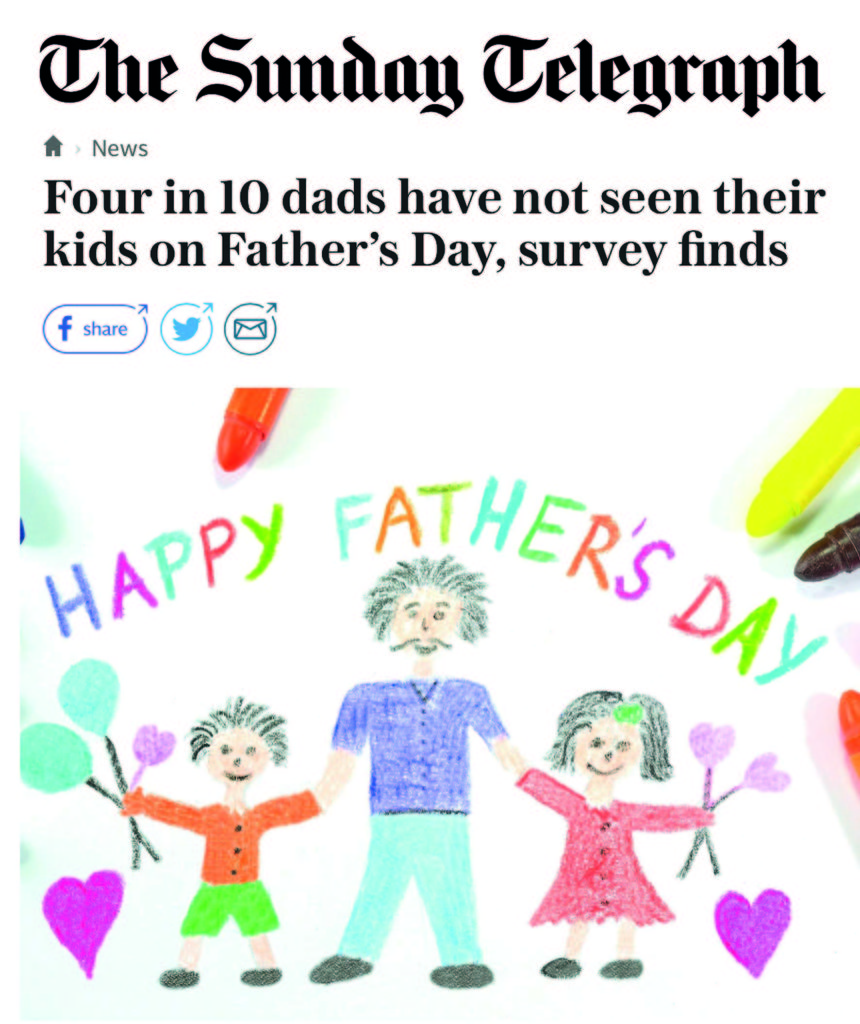 Chris Hopkins, Head of Politics at ComRes said: “The figures show a general desire for equality among the public when it comes to the make-up and potential break-up of families. On Father’s Day it is important that the concerns of dads are listened to, and further steps are made to strive for equal treatment of fathers compared to mothers in society.”

Matt O’Connor, the founder of Fathers4Justice commented: “These figures lay bare the appalling scale and reality of the challenges dads face on a daily basis. Denial of access to their children, estrangement and mental health problems for millions of men has become the norm. Worryingly as we celebrate the role and importance of fathers, few politicians seem bothered to raise these issues, or put forward solutions.”

Fathers4Justice, which is better known for the colourful protests of their supporters, believes the problems facing men are so acute that the next Prime Minister must appoint a Minister for Men. In fact, half (50 per cent) of British adults agree that, given there is a Minister for Women and Equalities, there should be a Minister for Men, and only one in six (17 per cent) disagree.

The poll also found that nearly one in six dads, (17 per cent) had experienced challenges accessing their children, while a quarter (27 per cent) knew someone who had. When asked if mothers who break court orders giving fathers access to their children should be prosecuted, six in ten (60 per cent) of British adults agreed, including 54 per cent of British women, while just nine per cent overall disagreed.

Mr O’Connor while admitting F4J was “better known for the activities of our supporters, climbing on buildings dressed as Batman and Robin,” said that the eye-catching stunts should not obscure the real issues facing millions of men in our country. “Since we started our campaign in 2001, our helpline has received in the order of 750,000 calls, roughly one every 15 minutes, from men, or their partners who are struggling with access after separation, depression and mental health problems, or who are being unfairly treated by a system that seems rigged against them. These fathers just want to be able to see their kids and not have to go through a lengthy and expensive legal process to make this happen.”

Asked if there should be equal access for mothers and fathers after separation, fully eight in 10 (80 per cent) of British adults agreed. While three-quarters (75 per cent) backed giving new fathers “automatic parental responsibility”, even when not married, and 43 per cent backed splitting child benefits equally between fathers and mothers, compared to just 16 per cent who opposed the change.

Worryingly for the Government, the poll found that nearly half (48 per cent) of British adults surveyed agreed that organisations like the Child Support Agency and Child Maintenance Service “do not treat fathers as equally as mothers”, just 7 per cent disagreed with this.

When asked whether they agree or disagree that “Family courts treat fathers as equally as mothers”, just one in five (21 per cent) agreed, while close to double this proportion (40 per cent) disagreed.

Mr O’Connor concluded: “There is a masculinity crisis in our country. Young men are more likely to be represented in the criminal justice system, go to prison and commit suicide. While boys from poorer families do less well at school than any other group. These problems are then compounded when parents divorce, or separate as the current system treats dads unequally. As our survey found, seven in ten parents, (72 per cent) agree that child support should include emotional as well as financial support.

“This is why we are urging all those aspiring to be the next Prime Minister to set out a package of reforms aimed at helping men and to appoint the first Minister for Men, who would have responsibility for making sure these reforms are delivered so that next year more dads get to see their kids on Father’s Day and throughout the year.”

ComRes interviewed 2,082 British adults online between 29th May and 9th June 2019. Data were weighted to be representative of British adults by age, gender and region.

ComRes also interviewed 1,015 British fathers between 29th May and 9th June, weighted to be representative of British adults by age, gender and region, with all ineligible respondents removed.

ComRes is a member of the British Polling Council and abides by its rules. Full tables at www.comresglobal.com. 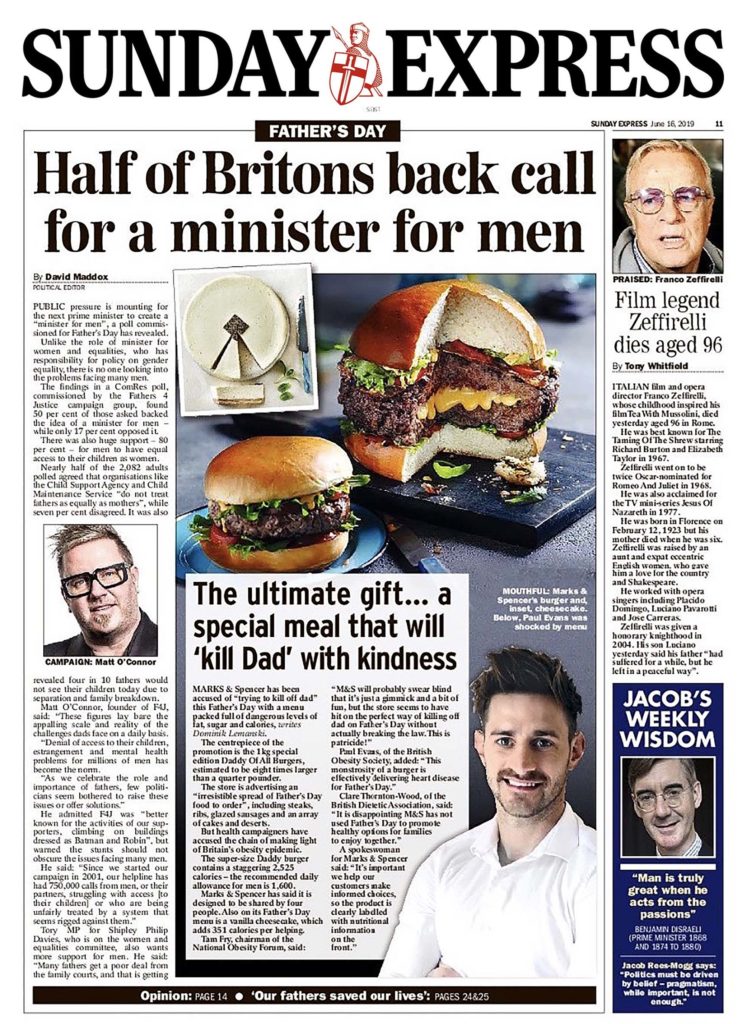 SUNDAY TELEGRAPH: Four in 10 dads have not seen their kids on Father’s Day, ComRes/Fathers4Justice survey finds

MAIL ON SUNDAY: ComRes/Fathers4Justice survey shows a THIRD of dads won’t see their kids this Father’s Day and HALF of voters want Britain’s next PM to create a ‘Minister for Men’