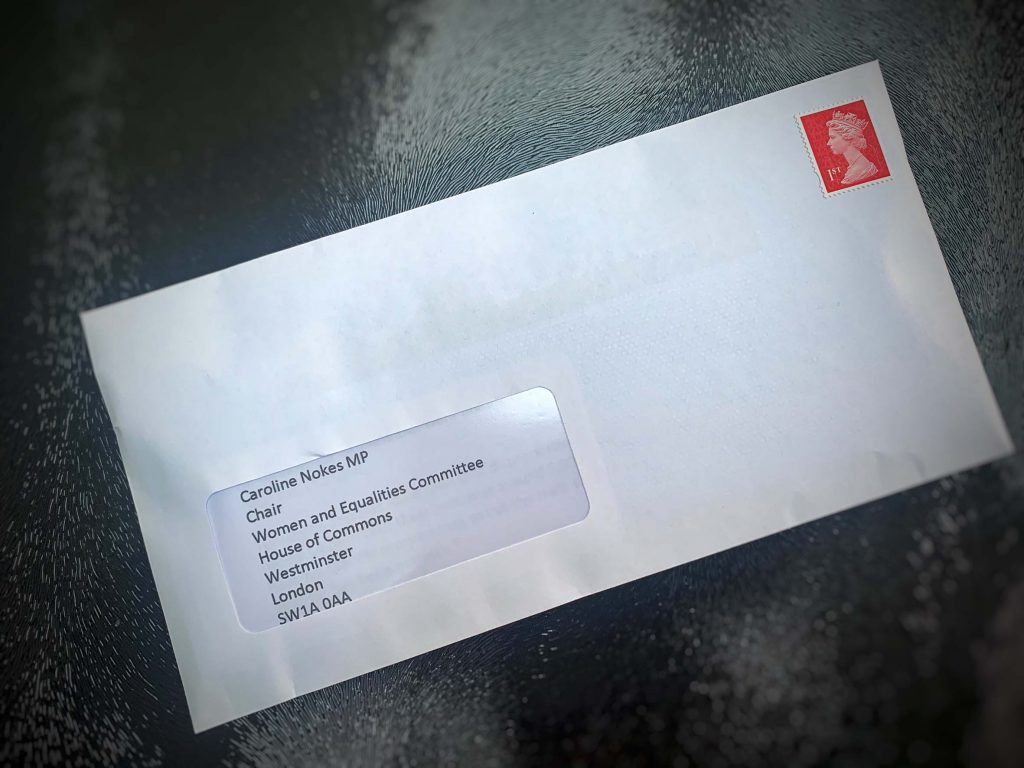 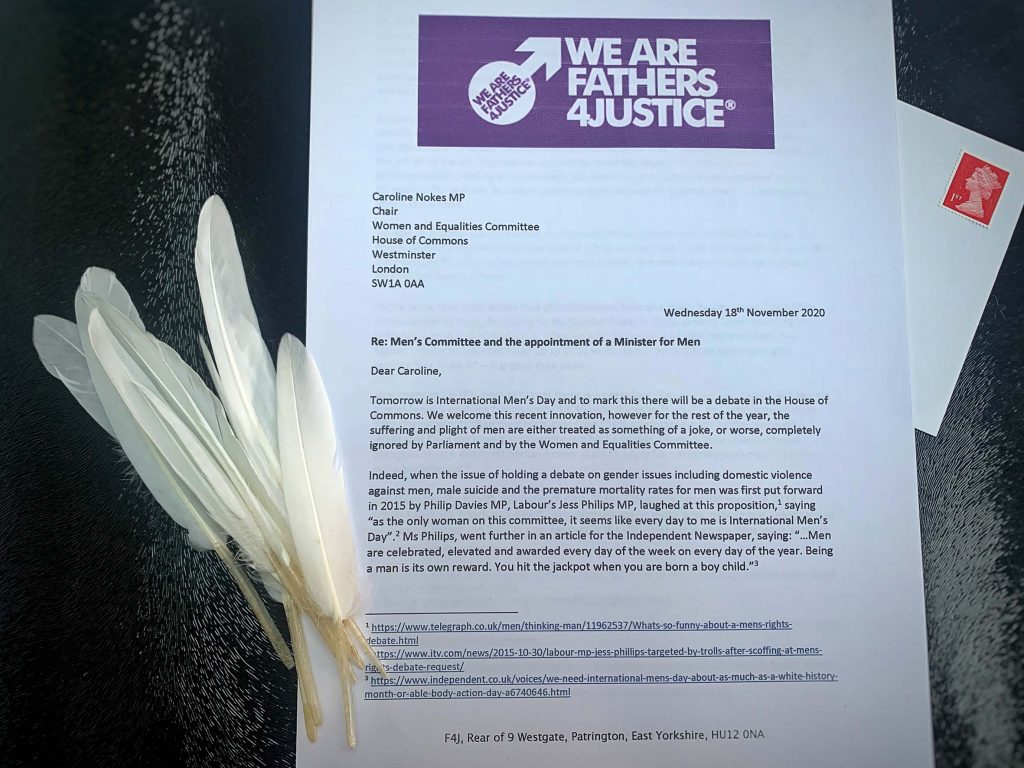 Fathers4Justice have accused the Women and Equalities Committee of “institutional cowardice” on men’s issues, and sent each MP on the committee a white feather.

Writing to the chair of the committee, Caroline Nokes MP, on International Men’s Day, F4J founder Matt O’Connor called on the Committee to resign unless they could demonstrate they were treating men’s and women’s issues equally, and would support the appointment of a Minister For Men.

Said O’Connor; “Just because Parliament is full of men, it does not mean they are discussing men’s issues. If this committee is a sham and presiding over state sponsored gender apartheid, then they should resign immediately, or face a concerted campaign from F4J for their removal.”

Read the letter to the Women and Equalities Committee here:

Caroline Nokes MP
Chair, Women and Equalities Committee
House of Commons
Westminster
London
Sw1A 0AA
Re: The men’s health emergency and the appointment of a Minister for Men

Tomorrow is International Men’s Day and to mark this there will be a debate in the House of Commons.

We welcome this development, however for the rest of the year, the suffering and plight of men is either treated as a trivial source of amusement for some MPs, or worse, completely ignored by Parliament and by the Women and Equalities Committee.

Indeed, when the issue of holding a debate on gender issues including domestic violence against men, male suicide, and the premature mortality rates for men was first put forward in 2015 by Philip Davies MP, Labour’s Jess Philips MP, laughed at this proposition,[1] saying “as the only woman on this committee, it seems like every day to me is International Men’s Day”.[2]

Ms Philips, went further in an article for the Independent Newspaper, saying: “…Men are celebrated, elevated and awarded every day of the week on every day of the year. Being a man is its own reward. You hit the jackpot when you are born a boy child.”[3]

Ms Philips comments are far from unique and reflect an ignorant and bigoted view that stereotypes men as abusers, and never the abused.

The stats could not be clearer, according to the last ONS Crime Survey for England and Wales, 1 in 3 domestic abuse victims are men, some 786,000 per year.[4] Put another way around 2,000 men are victims of domestic abuse every day, which means since you Boris Johnson became the Prime Minister, more than one million men have been victims, yet there is still little or no support for them.

A survey we conducted last year to coincide with International Men’s day highlighted the appalling lack of support for male victims of domestic abuse.

Out of 300 local authorities, just three confirmed any dedicated refuge provision for men – just 13 dedicated beds across the whole of the UK. Two further authorities provided dispersed or out-of-area accommodation. Setting this in context, 18 councils spent £21million of taxpayers’ money on services for women, but were unable to confirm even £1 spent on men.[5] 12 months on, little has changed.

Another issue that disproportionately affects men is suicide. Every day, nearly 14 men take their own lives – that’s around 5,000 deaths a year – yet the majority of councils have no specific programmes to cut the male suicide rate and the governmental response thus far has been lamentable.[6]
At the same time data shows that girls outperform boys at school. By Key Stage 2 girls have moved ahead of boys. According to the Gender Trust, in 2015, around 83per cent of girls achieved a level 4 or higher score, whereas only 77 per cent of boys attained level 4 or higher.[7] These trends continued up to GCSE level, with around 10 per cent more girls earning 5 or more A* – C grades than boys.

And then there are the health outcomes of men. In the Telegraph an article in 2015 concluded that “…as nation we spend more time, money and energy trying to prevent, detect and cure female cancers in the UK – and yet men are 58pc more likely to die of cancer before the age of 65 than women.”[10] We can find little evidence that this changed. As a recent Harvard study put it, “Men rule on the playing field, but in medical terms, it’s a very different story. When it comes to health, men are the weaker sex.”[11]

Regrettably, this health inequality has been further compounded by COVID. According to numerous reports disproportionately more men are dying of Coronavirus.[12] [13] [14] [15]

The ONS put this in unvarnished language, “Males had a higher rate of death due to COVID-19 than females in England and Wales; the age-standardised mortality rate (ASMR) for males was 65.1 deaths per 100,000 males compared with 43.3 deaths per 100,000 females.”[16] This represents a 50 per cent increase on the chances of dying if you are a man.

Given the catastrophic life outcomes for men compared to women in so many areas, we would expect the ‘equalities’ committee to give equal attention to men’s issues, as well as women’s issues, yet it is clear this is not happening.

Put simply, it appears to many, that men’s lives do not matter.
As Paulo Coelho said, only cowards hide behind silence – and this abject failure to look at suffering of men and why so many are dying prematurely, is nothing short of institutional cowardice.

Accordingly, we are sending 11 white feathers in the post today, one for you, and the other members of the Committee.

Given the above facts, you should consider your position as the Chair for failing to investigate these inequalities.

We also call on the Government and Parliament create a men’s committee that would focus on the structural barriers, discrimination and poor outcomes that so many men experience day in day out in Britain.

We also urgently need to appoint a Minister for Men to co-ordinate a government response to the men’s health emergency, and give men an equal voice in government.

If your response is to say that Parliament is full of men, this may be the case, but like most men, it does not mean they are discussing men’s issues.

Those that will not support these overdue proposals should consider their position as it is clear they do not support equality for men on the basis of their gender, and are presiding over an insidious form of gender apartheid.

The creation of the Men’s Committee and the appointment of a Minister for Men will not resolve the crisis men face, or the disgraceful way those in authority continue to treat men, whether as victims of domestic abuse, the denial of basic equal parenting rights for separated dads, or the blind eye turned to the scandal of male suicide, education failure or the impact of COVID, but it would be a start.

Along with these two measures, F4J is calling on the Government to:

C.C. All Members of Parliament 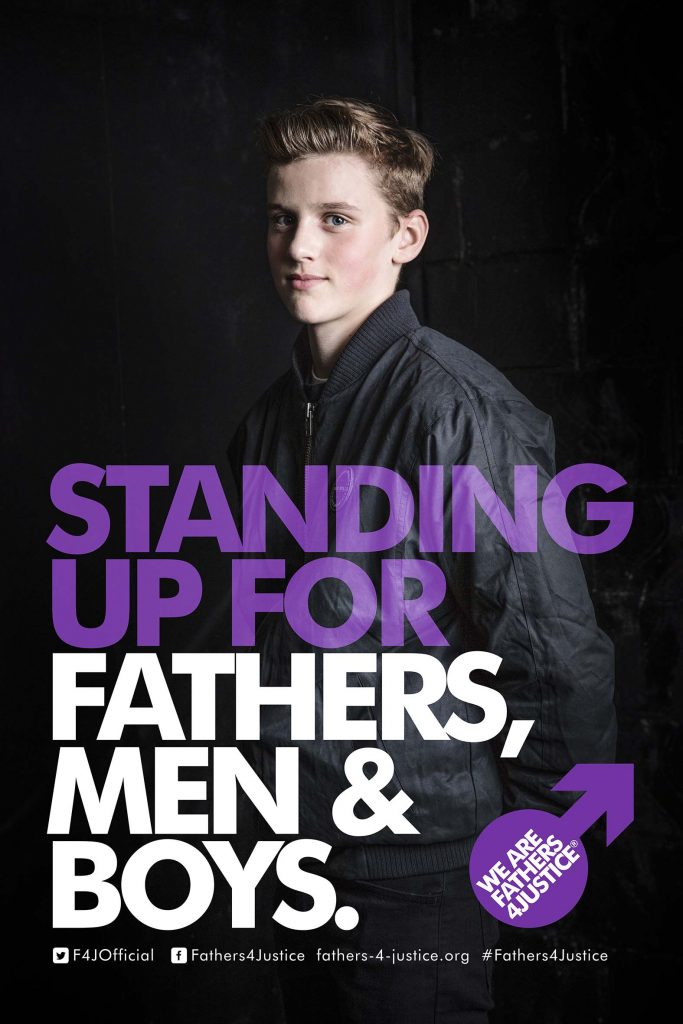