No-Fault Divorce Law will create a ‘Fraud of the Rings’ 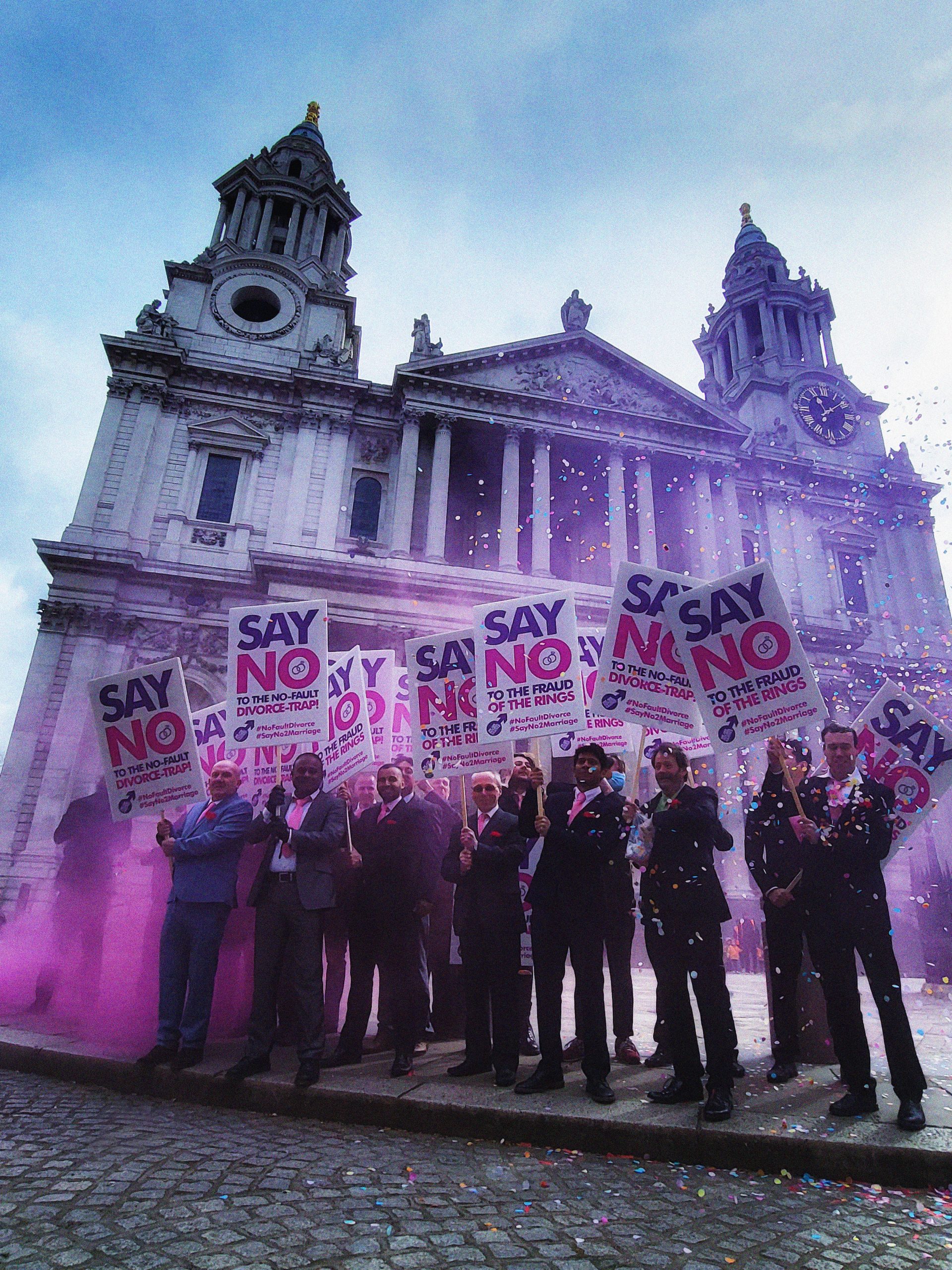 Fathers4Justice ‘Fraud of The Rings’ protest outside St Paul’s

Pressure group, Fathers4Justice (F4J), will follow up a protest at St Paul’s Cathedral this week, with the launch a new advertising campaign on the London Underground this week. It will urge men to boycott marriage and avoid what they call the ‘deadly divorce trap’ created by new no-fault divorce laws to be introduced on 6th April.

F4J founder Matt O’Connor warned, “Under these new laws, marriage should come with a public health warning for men – because marriage is a trap. A mantrap.

“We know from the institutional bias of the courts over the last 20 years, there is no no-fault divorce – it’s always the man’s fault. It’s not for nothing that London is the divorce capital of the world. It is because greedy spouses choose to get divorced here because of the near guaranteed huge payouts.

“‘No-fault’ divorce will be bad for men’s health, and make it easier for fathers to be removed from families as divorce does not include child arrangements, meaning any conflict will spill into an adversarial and broken family justice system.

The group argues that men need to reject what they call the ‘fraud of the rings’ and boycott marriage in order to avoid a deadly divorce trap in future years.

F4J rejects misleading claims by the government and solicitors that no-fault divorce will end the ‘blame game’ and say that the archaic, sexist notions of divorce remain, including unlimited spousal maintenance, and the presumption that the children live with their mother, with the father being denied automatic rights of access.

According to the Samaritans, divorced men are 3 x more likely to commit suicide than married men, and research shows divorce for men is linked to poor mental health and early deaths as men lose their partners and children in what F4J calls a ‘living family bereavement’.

The group – who represent over 100,000 families in the UK – say the ‘statement of arrangements’ in divorce papers provides no legally binding child arrangements, and that fathers too often agree to divorce without understanding they will have no legal access rights to see their children.

The campaign’s objectives include:

SUNDAY EXPRESS: CAMPAIGN SLAMS NO-FAULT DIVORCES Campaign group Fathers4Justice has denounced “no-fault” divorce as a sham that will just make “a bad situation worse”. Founder Matt O’Connor said, “it is a grotesque misrepresentation to suggest it will end the blame game…the problems will be displaced from the divorce courts into the family courts” https://www.express.co.uk/news/uk/1593989/divorce-law-no-fault-divorces

BREITBART NEWS: Said Fathers4Justice founder Matt O’Connor: “The rush to divorce is creating a class of McDads, whose lives and interests are as disposable as a burger wrapper” https://www.breitbart.com/europe/2022/04/14/divorce-filings-jump-50-per-cent-after-uk-introduces-no-fault-law/

THE NO-FAULT DIVORCE TRAP – THE FACTS

“After 12 months’ marriage I lost my son, my house and my money and was left with nothing. Now I’m living in a bedsit fighting through the family courts to see my boy. It nearly killed me.” Mike Burton, Dad