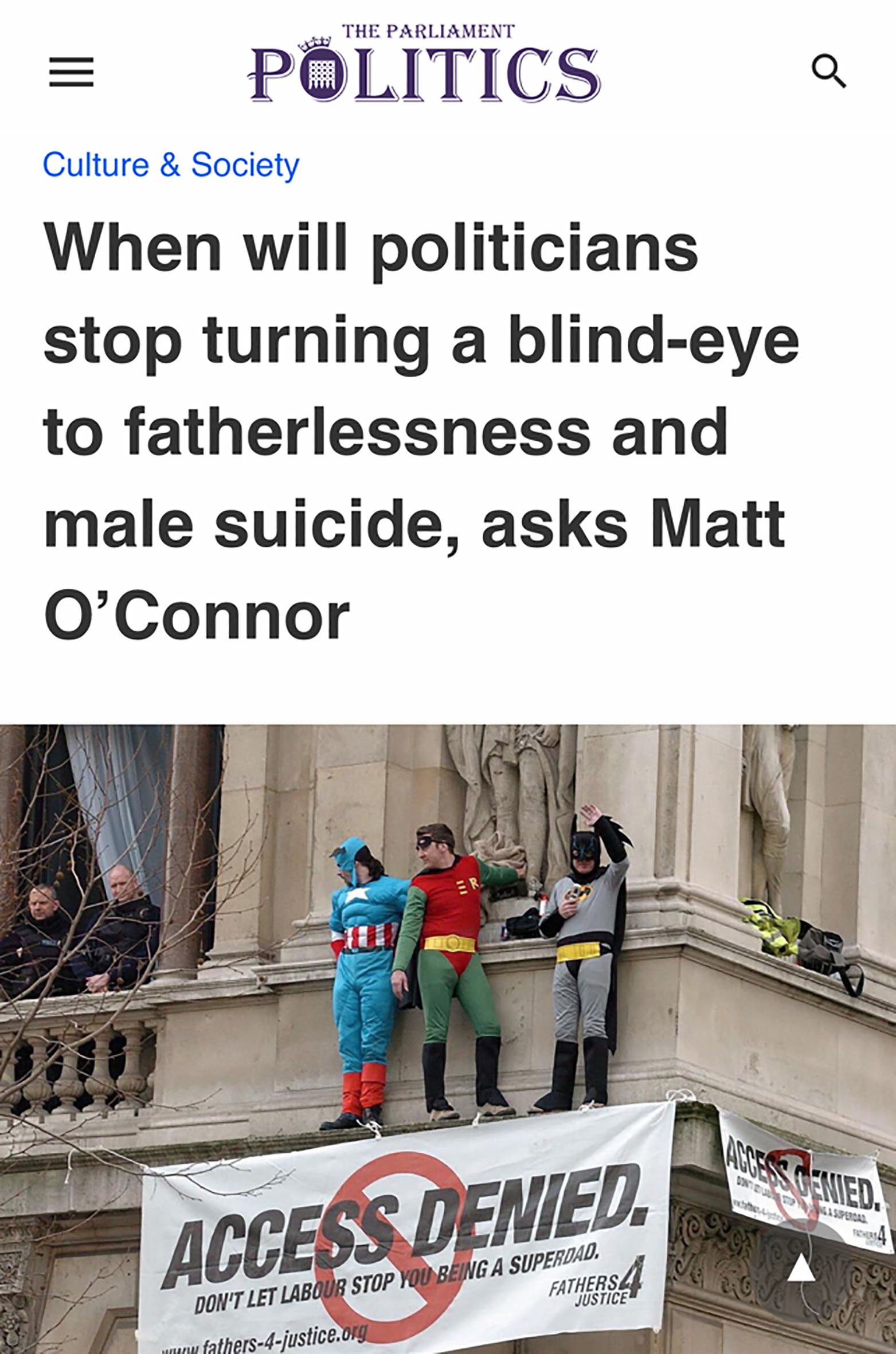 But this symbolic day is routinely subject to ridicule and mockery by the likes of Jess Phillips MP who once told the Independent Newspaper: “…Men are celebrated, elevated and awarded every day of the week on every day of the year. Being a man is its own reward. You hit the jackpot when you are born a boy child.”

You could once claim Parliament was the bastion of men, but there are now more women Labour MPs than men.

This ‘fatherphobic’ Parliament shames Britain and has led to million’s of children living in fatherless households, without any father figure, leading to an explosion of teenage knife-crime and anti-social behaviour.

In the absence of a father, the local gang leader or drug dealer becomes father figure to the fatherless, with all the social consequences that entails. Last year London recorded its worst ever annual death toll from teenage homicides – a grim figure of 30 deaths in 2021.

Yet politicians turn a blind eye to this crisis, and have suffocated and censored legitimate debate about men’s issues in a way that Putin would be proud of.

In fact the only time men’s issue got coverage was when F4J was scaling public buildings and powder-bombing Prime Ministers. No wonder so few people have any confidence in our democracy, or faith in our politicians.

Politicians have repeatedly blackballed Fathers4Justice, denying over 100,000 families a voice in their Parliament, an act which is deliberately anti-democratic.

In fact our constituency is larger than the Liberal Democratic Party, a sobering reality that should make politicians of every colour re-think their approach to men’s issues.

We have been repeatedly excluded from Parliamentary Select Committee’s, which once led Sir Bob Geldof to boycott a committee meeting unless F4J was invited.

To move forward, we must shatter the old, lazy, sexist stereotypes perpetuated by dinosaurs like Jess Phillips, who believe that women must be chained to the sink and their children at home. As American feminist Gloria Steinman said‘woman can’t be equal outside the home, until men are equal in it.’

We need our politicians to commit to 50/50 shared parenting as a matter of urgency, to demonstrate that the best parent for a child, is both parents. To free mothers from the kitchen sink, and allow them to pursue their careers, start businesses, and follow their dreams.

To give men proper representation in our Parliament by appointing a Minister for Men and Boys to lead and co-ordinate a public health response to mass fatherlessness, and the male suicide epidemic, which tragically claims the lives of so many dads after losing contact with their kids.

To address the sexist demonisation of boys in schools as predators and abusers. No wonder boys are failing at school when they are continually taught they are bad and a threat to women. What sort of toxic legacy will that leave imprinted on them, and what impact on their mental health?

Data shows that girls outperform boys at school. By Key Stage 2 girls have moved ahead of boys. According to the Gender Trust, in 2015, around 83per cent of girls achieved a level 4 or higher score, whereas only 77 per cent of boys attained level 4 or higher. These trends continued up to GCSE level, with around 10 per cent more girls earning 5 or more A* – C grades than boys.

When it comes to domestic abuse politicians still rely on ideologically driven stereotypes that paint men as abusers and women as victims but the stats could not be clearer; according to a recent ONS Crime Survey for England and Wales, 1 in 3 domestic abuse victims are men, some 786,000 per year. Put another way around 2,000 men are victims of domestic abuse every day, yet there is still little or no support for them.

In 2020 we conducted a survey that highlighted the appalling lack of support for male victims of domestic abuse.

Out of 300 local authorities, just three confirmed any dedicated refuge provision for men – just 13 dedicated beds across the whole of the UK. Two further authorities provided dispersed or out-of-area accommodation. Setting this in context, 18 councils spent £21million of taxpayers’ money on services for women, but were unable to confirm even £1 spent on men. 2 years later, little has changed.

We need fathers and mothers, sister and brothers, to come together in common purpose, to fight for the parental equality that I believe will lead to genuinely better outcomes for our children, our families, and our country, and save the taxpayer millions in unnecessary legal, court, and childcare costs.

We want an International Men’s Day everyone can celebrate – not a toxic legacy of more ridicule, more male suicides, and more mass fatherlessness.