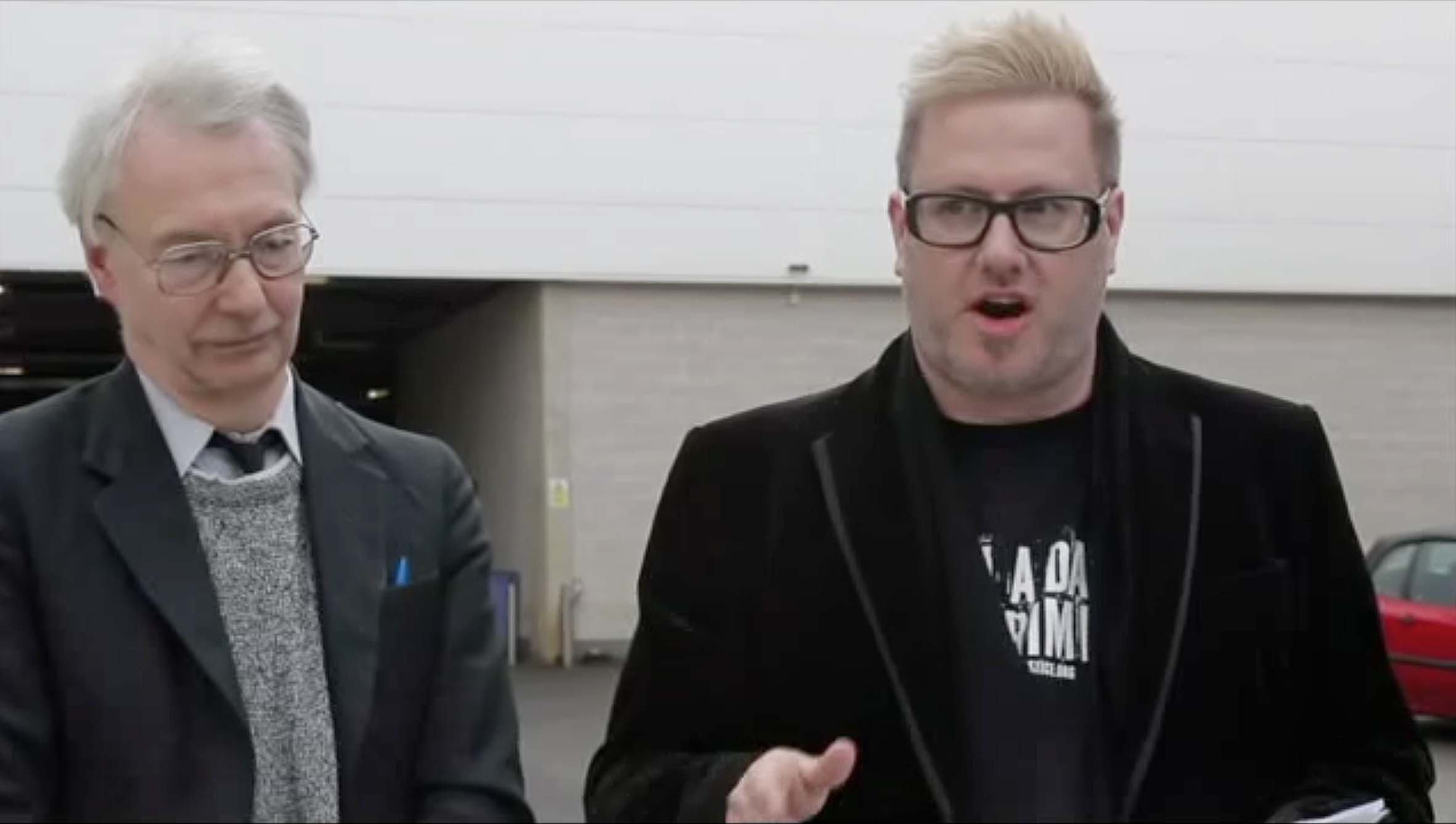 The High Court last Friday (4/11/16) ruled in a declaratory judgment that court managers and magistrates sitting at Aldershot Magistrates’ Court on 20 February 2015 acted ‘unlawfully’ in excluding members of the public who sought to attend the trial of Fathers4Justice founder Matt O’Connor, for a Section 5 Public Order Act offence.

Matt O’Connor said he has been treated like a terrorist in proceedings related to a minor Public Order Act offence which have now lasted over two years. O’Connor maintains his original arrest was unlawful and politically motivated after Hampshire Police conspired to conceal the involvement of Caroline Nokes MP in a violent attack at O’Connor’s home in 2014.

Para.4 “Some of those who had come to observe the trial were supporters of Fathers4Justice, while others were not affiliated with that organisation but were interested in Mr O’Connor’s case because they believed that he was a victim of unfair treatment by the Hampshire Police.”

Para.49. “Mr O’Connor’s case had aroused a strong interest, not only among some supporters of his organisation but also among some individuals involved in local Hampshire politics. To prevent all the people who came to support Mr O’Connor, without any valid reason, from exercising their right to observe the proceedings not only created a strong and understandable sense of grievance but had the consequence that justice could not be seen to be done.”

Para. 53. “For the reasons given, we will make declarations: (1) that the decisions of the court managers and of the magistrates sitting at Aldershot Magistrates’ Court on 20 February 2015 to exclude Mr Jerrard and other members of the public who sought to attend Mr O’Connor’s trial from the court building were unlawful; and (2) that, in consequence, no valid proceedings in Mr O’Connor’s trial took place on that day.”

O’Connor has now launched committal proceedings in the High Court against court staff for interfering in the course of justice and has not ruled out further legal action against other parties involved in the case.

He said, “Secrecy is the basis of dictatorships, not democracy. The Court and HMCTS have provided no evidence whatsoever to support their malicious, fabricated and politically motivated actions.”

“In the absence of any credible defence by HMCTS, it is clear that the only reason for the exclusion of the public was to silence me in court and prevent me raising the involvement of Caroline Nokes MP in a violent attack at my home in 2014, which subsequently led to my arrest after I complained about a cover up by Hampshire Police.”

“Those excluded included my defence witnesses, including Hampshire County Councillor Tony Hooke, who was assaulted by Court staff on the day and has also been a victim of political policing in Hampshire.”

“Separate concerns have also been raised about witness coaching by the CPS and fraud. Two judges have also recused themselves from proceedings because of their links to people in the case.”

“It is preposterous to claim – as the Police, CPS and HMCTS do – that these extraordinary sanctions, which have led to this circus lasting over two years, relate to a minor Public Order Act offence. Given the endemic corruption that has been revealed and the committal proceedings I am now bringing against court staff, I can have no confidence that I will receive a fair trial in Hampshire.”

CASE BACKGROUND: A CONSPIRACY OF SILENCE

Read the extraordinary case background into nearly 3 years of politically motivated, taxpayer funded proceedings against F4J founder Matt O’Connor, including the use of Government Solicitors following the targeting of O’Connor and his family in 2014. 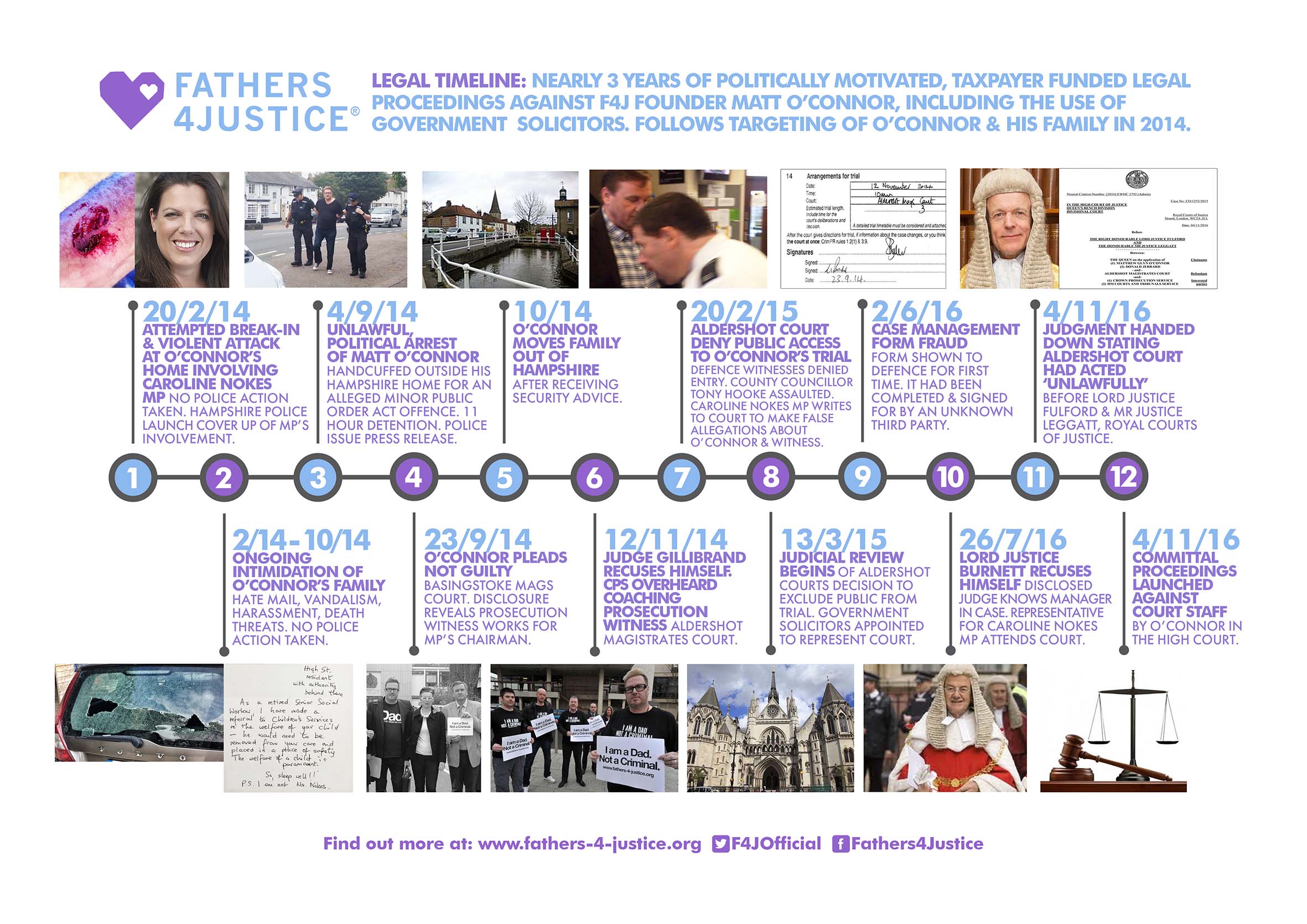 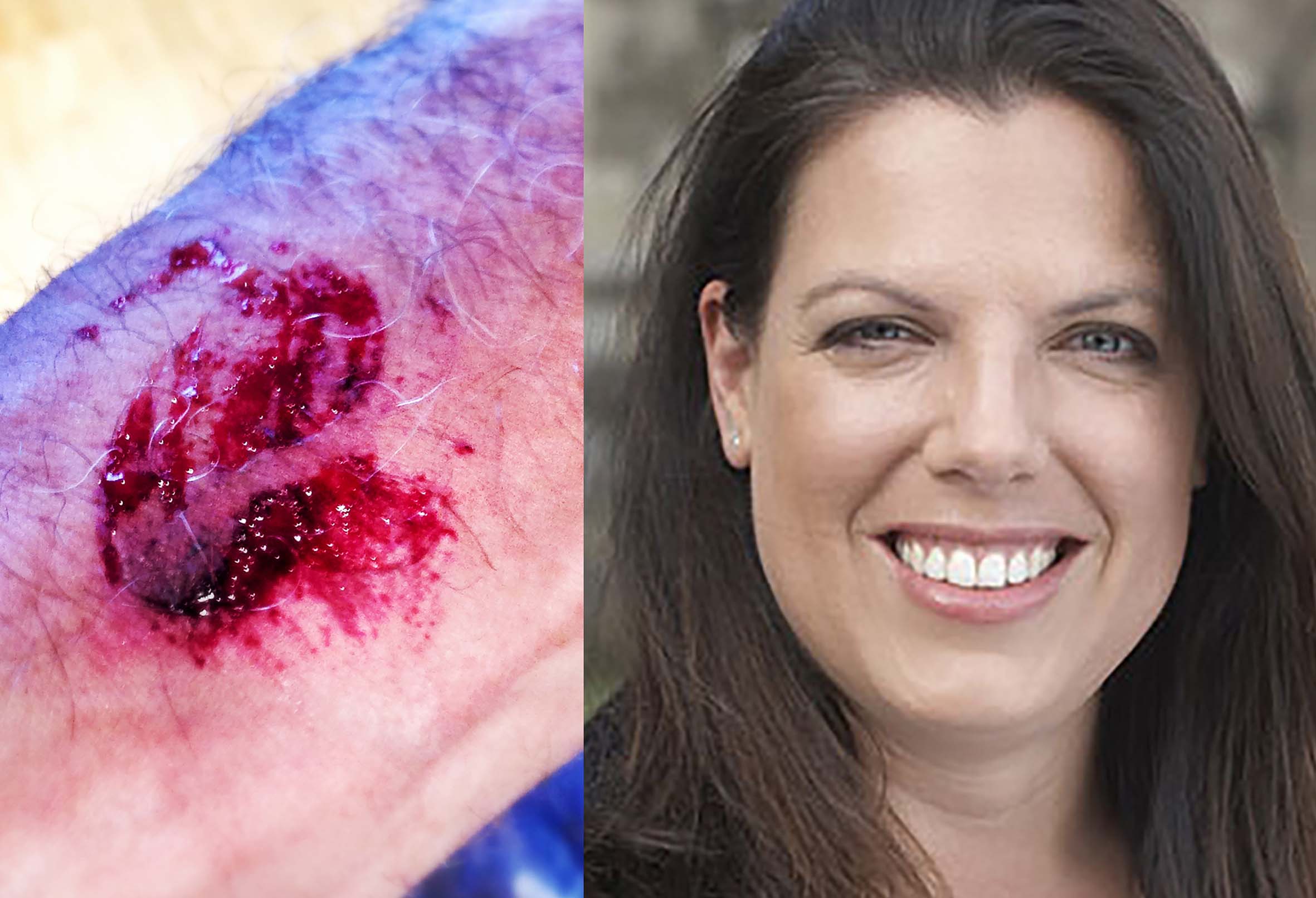 Fathers4Justice believe the arrest and criminal charge under s.5 Public Order Act 1986 were politically motivated and relate to a violent break in and attack at Matt O’Connor’s home involving Caroline Nokes MP on 20/2/14 and the subsequent targeting of his family. The involvement of the MP was concealed by Hampshire Police and a cover up launched.

O’Connor’s arrest on 4/9/14 followed the publication of a PSD report that week into the involvement of Ms Nokes into the attack and further complaints by O’Connor about the targeting of his family and a planned fundraising party to be held by the MP in a house adjacent to his on 20/9/14. https://www.fathers-4-justice.org/2015/11/unfit-for-public-office-the-case-against-caroline-nokes-mp/

The group also claimed there had been a child abuse cover up at Stanbridge Earls School in Hampshire involving Ms Nokes and the former Chief Constable for Hampshire Andy Marsh, who was later investigated for leaking confidential information to the MP. http://www.dailyecho.co.uk/news/11135715.Did_top_cop_order_whitewash_into_probe_at_sex_scandal_school_/

In 2016, Mr Marsh (who had now become the Chief Constable for Avon and Somerset Constabulary), was placed under a second criminal investigation over the child abuse scandal. http://www.bbc.com/news/uk-england-36287828

F4J claim that O’Connor’s arrest was not only politically motivated , but was unlawful, and formed part of a campaign of intimidation by Ms Nokes, her associates and Hampshire Police. They contrast the Police cover up launched to protect the involvement of Ms Nokes, with a Police press release sent to media following Mr O’Connor’s arrest.

In the absence of any credible defence by HMCTS explaining why the public were denied access to Mr O’Connor’s trial, the group allege this was another political decision, taken by a senior figure at the Ministry of Justice, in a ham fisted attempt to silence O’Connor and prevent him making these claims in open court.

During the course of proceedings the following it was revealed:

SECRETS & LIES: THE UNLAWFUL ACTIONS OF THE COURT

Fathers4Justice can now reveal evidence supplied by the Government Legal Department, acting for Aldershot Magistrates Court and Her Majesty’s Courts and Tribunal Service (HMCTS), that they rely on to justify their decision to deny members of the public, trial witnesses, and an elected county councillor, entry to the trial of F4J founder Matt O’Connor on 20/2/15.

HMCTS made various fabricated claims that are not supported with any evidence whatsoever. They appear more concerned with reputational damage and publicity, than the alleged threat to security. Worse still, the disproportionate, over-the-top response would be more appropriate for the trial of an individual who poses a threat to national security, rather than a shared parenting campaigner.

Evidence was disclosed by HMCTS of how the SW Regional Security Officer Mr Richard Harvey, and the Court Delivery Manager Ms Donna Beeson conspired to bar entry to the Court building of anyone connected with or supporting Matt O’Connor.

Finally, it was disclosed that HMCTS had ‘blacklisted’ Fathers4Justice in an internal manual in 2012 on the grounds the group use ‘fear and intimidation’ of court staff and pose a risk to court ‘health and safety’. This again is manifestly untrue.

Read the background to the case here: https://www.fathers-4-justice.org/2016/10/fathers4justice-founder-high-court-judicial-review-final-hearing-closed-courts/

Read about the involvement of Caroline Nokes MP in a violent attack on Matt O’Connor’s home on 20/2/14, the targeting of his family and the cover up by Hampshire Police which led to his arrest: https://www.fathers-4-justice.org/2015/11/unfit-for-public-office-the-case-against-caroline-nokes-mp/