Is this Britain’s most corrupt, anti-father MP? 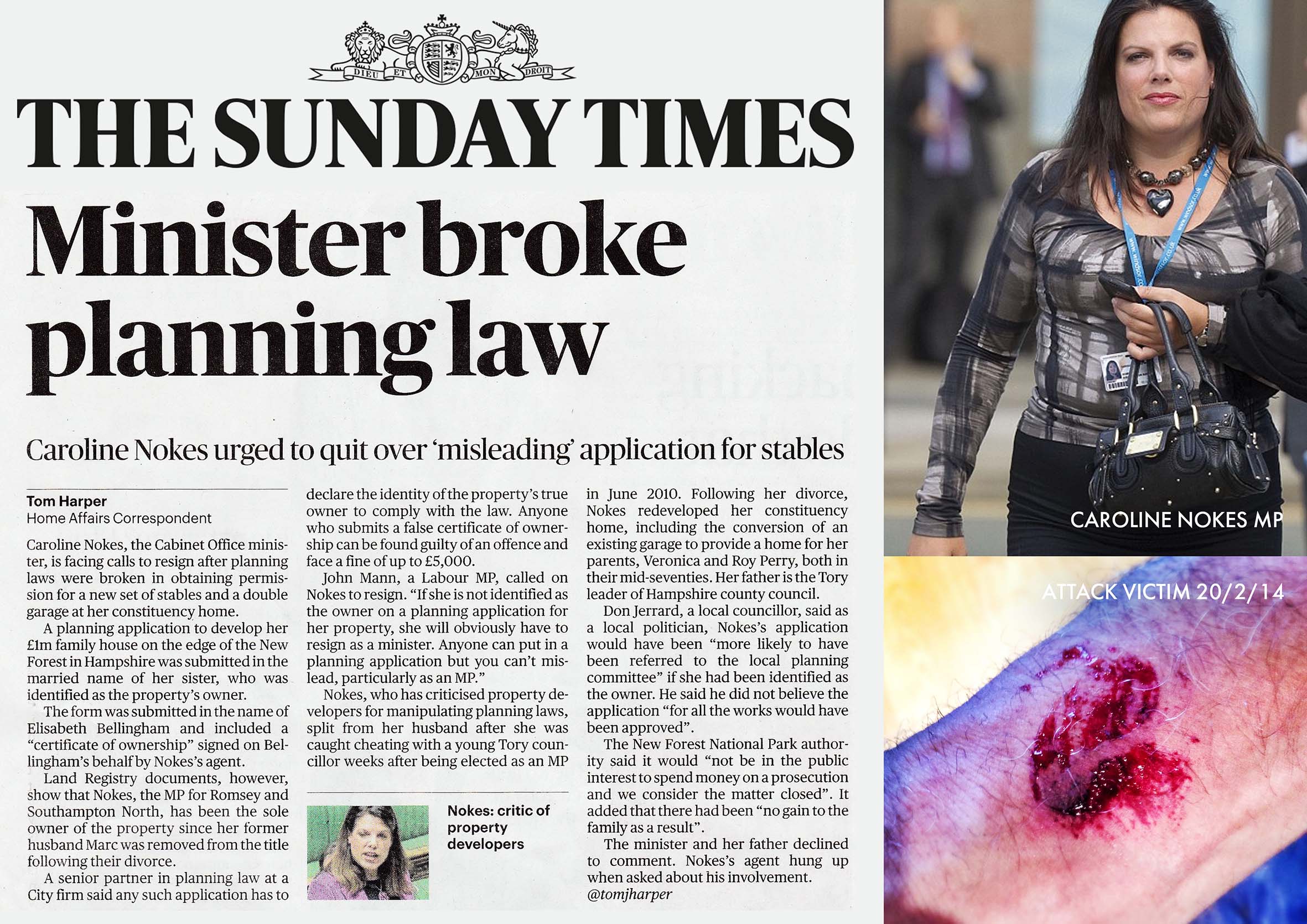 Today’s story in the Sunday Times alleging that Cabinet Minister, Caroline Nokes, MP for Romsey and Southampton North, illegally and deceitfully broke planning laws regarding the building of a Coach House in her grounds, is the latest in a long line of scandals to plague the MP.

On 20th February 2014, Nokes was involved in a violent attack at the home of Fathers4Justice founder Matt O’Connor, who had been working to expose a child abuse cover up at Stanbridge Earls School, Hampshire, involving the MP and former Chief Constable of Hampshire, Andy Marsh.

The MP’s involvement in the attack was covered up by Hampshire Police and was only disclosed six-months after the incident. The MP, who claimed travel expenses to drive to O’Connor’s home and lied to constituents saying she had “not been present”, was never prosecuted over her role.

Six-months later, O’Connor was arrested outside his home after complaining about a Police cover up. The High Court later ruled in a Judicial Review that an attempt to hold his trial in secret, allegedly to protect the MP, was unlawful.

Nokes then attempted to get civil proceedings thrown out in February 2015 before the General Election stating, “Given the Second Defendant’s position as a Member of Parliament with imminent hustings this (case) could be particularly damaging.”

The MP then attempted to close the Fathers4Justice Twitter and Facebook accounts, refused to sign Early Day Motion 210 supporting Shared Parenting, or join ten of her constituents at a Shared Parenting event in Parliament in June 2013.

In 2016, when she was Minister for Welfare Delivery at the Department for Work and Pensions, Nokes caused outrage by claiming dads were seeking court orders to see their kids so they could reduce child maintenance payments.

Previously, the MP, who said she was “too pretty for politics”, was exposed having a four-year affair with a “Tory toy boy” behind her husband’s back, despite proclaiming strong “christian values.”

In 2011 the MP attracted controversy when she went on a junket to the ‘cannibal’ dictatorship of Equatorial Guinea.

It is understood the MP has also received at least three four-figure ‘donations’ from property developers in recent years, including one last month, as large swathes of the historic Test Valley are buried under new housing developments.

Today’s revelation of a planning breach would normally result in a £5,000 fine, but the Minister for Government, Resilience and Efficiency has avoided prosecution to date.

The fact that the person living in the Coach House in the grounds of her property is the Leader of Hampshire County Council, her father, former MEP Cllr Roy Perry, also raises serious questions about institutional corruption in Hampshire.

It is claimed both Perry and Nokes have avoided paying any Council Tax on the property which has its own, separate utilities.

This at a time when Cllr Roy Perry has made over £130 million in cuts to local services in Hampshire, including those for mental health services and vulnerable people.

Many local residents are now saying that both Nokes and her father should resign and are unfit for public office.

The MP has never held a day job, but was previously Chief Executive of the Pony Club where she raised the issue of “overheight ponies”.

The Sunday Times: Caroline Nokes urged to quit over ‘misleading’ application for stables

Caroline Nokes, the Cabinet Office minister, is facing calls to resign after planning laws were broken in obtaining permission for a new set of stables and a double garage at her constituency home.

A planning application to develop her £1m family house on the edge of the New Forest in Hampshire was submitted in the married name of her sister, who was identified as the property’s owner.

The form was submitted in the name of Elisabeth Bellingham and included a “certificate of ownership” signed on Bellingham’s behalf by Nokes’s agent.

Land Registry documents, however, show that Nokes, the MP for Romsey and Southampton North, has been the sole owner of the property since her former husband Marc was removed from the title following their divorce.

A senior partner in planning law at a City firm said any such application has to declare the identity of the property’s true owner to comply with the law. Anyone who submits a false certificate of ownership can be found guilty of an offence and face a fine of up to £5,000.

Nokes, who has criticised property developers for manipulating planning laws, split from her husband after she was caught cheating with a young Tory councillor weeks after being elected as an MP in June 2010.

Following her divorce, Nokes redeveloped her constituency home, including the conversion of an existing garage to provide a home for her parents, Veronica and Roy Perry, both in their mid-seventies. Her father is the Tory leader of Hampshire county council.

Don Jerrard, a local councillor, said as a local politician, Nokes’s application would have been “more likely to have been referred to the local planning committee” if she had been identified as the owner. He said he did not believe the application “for all the works would have been approved”.

The New Forest National Park authority said it would “not be in the public interest to spend money on a prosecution and we consider the matter closed”. It added that there had been “no gain to the family as a result”.

The minister and her father declined to comment. Nokes’s agent hung up when asked about his involvement.