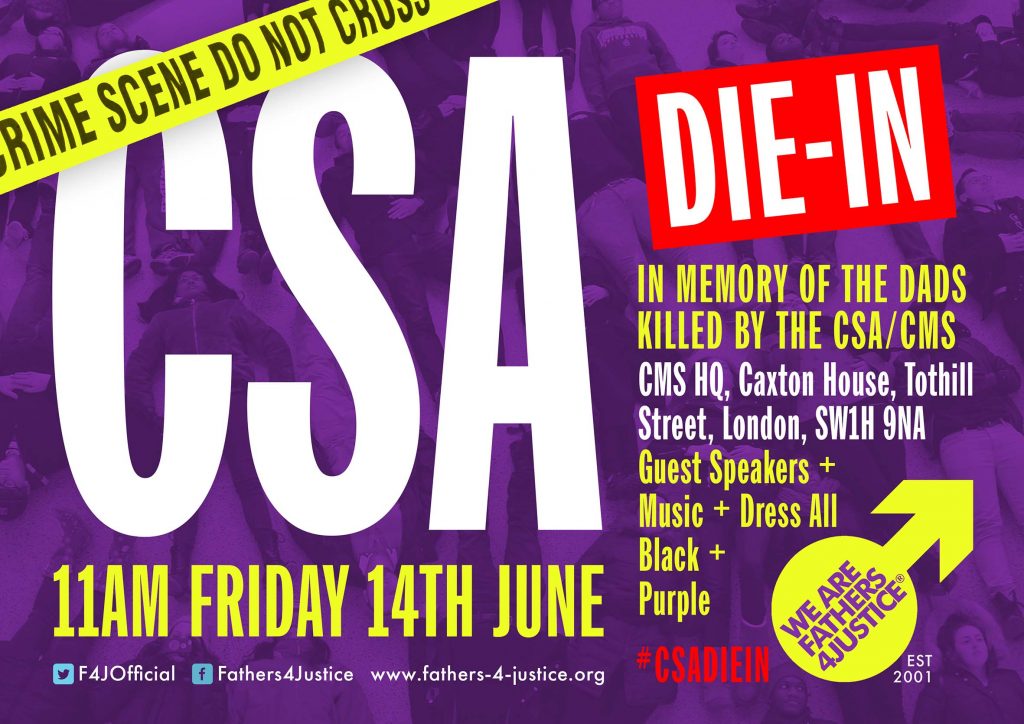 Campaign group Fathers4Justice is to stage a “die-in” before Father’s Day in memory of the dads whose deaths have been linked to the Child Support Agency and Child Maintenance Service.

The protest, at 11am Friday 14th June, takes place outside the London head office of the Child Maintenance Service, Caxton House, Tothill Street, London, SW1H 9NA. Guest speakers and musicians will also be attending. Supporters should wear all black and purple.

It follows figures obtained by Lord Pearson in the House of Lords on behalf of Fathers4Justice that linked 15 deaths a day to CMS/CMS cases between 2003 and 2017, totalling 74,700 deaths. While not all of these deaths involve fathers, or are death by suicide, previous figures from the Daily Express and F4J showed that separated dads are three times more likely to die after separation than mothers.

The CMS / Department for Work & Pensions claims it does not record the causes of death, though other figures indicate 18% of the total number of deaths are caused by suicide.

Fathers4Justice are now calling for a public enquiry into suicide rates linked to the CSA/CMS and for CSA/CMS executives to be prosecuted for manslaughter.

A recent focus group meeting of non-resident dads in London put on record for the first time, the views of fathers who are victims of the child support system.

Following that meeting and subsequent discussions with fathers who attended, F4J decided that further pressure should be brought to bear on the CMS and a protest was organised.

Said F4J founder Matt O’Connor, “The CMS must disclose immediately the suicide rates of non-resident parents link to cases it has managed. We are aware they are refusing FOI requests in this matter.”

“Further, we are seeking the prosecution of CSA/CMS executives for manslaughter in such case and have asked our legal team to consider bringing private prosecutions in such cases.”