The Mother Of All Hypocrisy 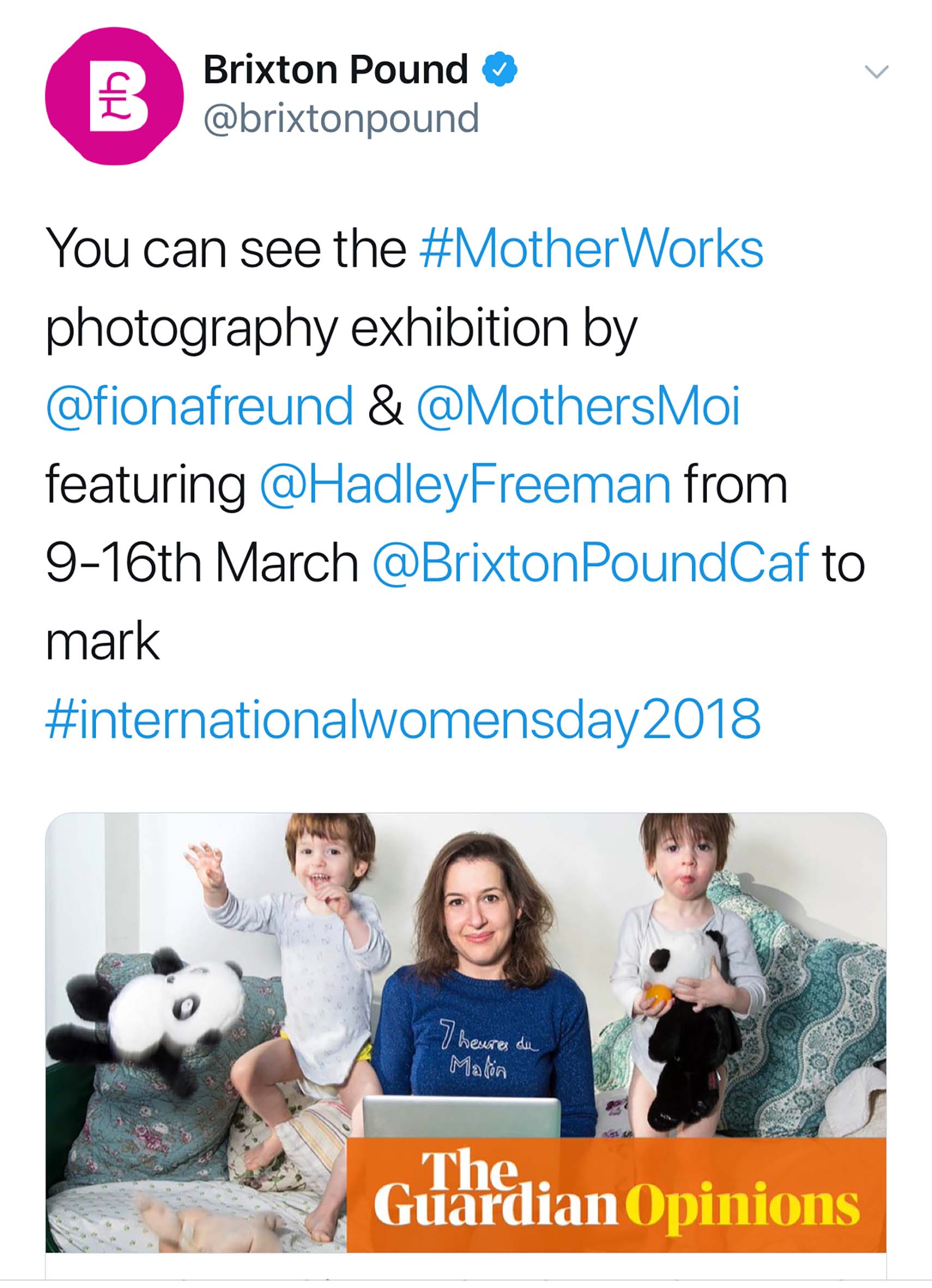 Fathers4Justice are ‘exploiting two toddlers in a photo for International Women’s Day to promote their organisation’ she claimed in a follow up tweet.

Yes, hell hath no fury like a feminist Guardian journalist, who spent much of her Sunday afternoon obsessively tweeting about F4J, before rocking and trolling into orbit like a malfunctioning SpaceX rocket.

Let’s hope the sherry cabinet was locked and the kids were with dad.

24 hours later on Monday afternoon, Freeman was still jabbing away on Twitter. Hadn’t she got a job to go to? Had The Guardian shut down?

And what pray, what was the cause of her consternation?

An innocuous tweet by F4J of Freeman pictured with her two boys (above), taken for the worthwhile ‘Mothers Works’ photographic exhibition which read, ‘Fabulous picture. Let’s hope mum @HadleyFreeman recognises the challenges her sons will face.’

Now, given we campaign for parental equality for separated dads, and across a range of men’s health issues, including the male suicide epidemic, (witness our #SOSManDown campaign) we are motivated by trying to secure better life outcomes for men and boys.

Men and boys are facing an unprecedented public health crisis with 3m+ kids living in fatherless homes, dads denied basic parenting rights, separated dads three times more likely to die than mothers, and 12 men taking their own lives every day. When it comes to the health gap between men and women, 53% of all cancer deaths are men, and one man in five dies before the age of 65.

This discrimination isn’t just against ‘men’, but against our sons, our brothers and our fathers.

In this age of equality, the last and most seriously disregarded category of disenfranchised human may be fathers, routinely brutalised and separated from their children in secret family courts.

Unfortunately for us, men don’t tick any convenient ‘minority’ boxes, so are deemed unworthy of basic human rights, dignity or humanity.

There is more legislation to protect dogs than dads now in the UK.

Applauding the concern shown by women like Freeman for other victims of discrimination, and mindful that many of today’s young mothers can expect to live to see their own sons stripped of their rights and humanity, one would think she would support equality for both genders in the best interests of her children.

So why her over-reaction? Why the poisonous invective aimed at a campaign whose sole objective is parental equality and better outcomes for our children?

Maybe our tweet inadvertently struck too close to home. Maybe it pricked her conscience with an inconvenient truth.

Freeman’s response – to claim F4J target women – is as libellous as it is absurd.

Deliberately conflating the meaning of the words ‘highlight’ (which is what we do) with ‘targeting’, (which implies a malevolent, criminal intent), shows the desperation of her argument and the Orwellian perversion of language to distort meaning.

You won’t find Freeman tweeting about women who break court orders with impunity and deny children access to their dads.

That doesn’t fit the feminist narrative of the Salem like witch-hunt Freeman supports known as MeToo, where men are targeted with impunity by a rabid, finger-pointing social media lynch mob.

This sort of ‘targeting’ is apparently acceptable, as is making allegations (often false) with impunity – allegations that are enough to destroy reputations and careers with a single tweet.

Yet if Freeman had taken the time to fact check F4J, she would know one-third of Fathers4Justice supporters are women, and that International Campaign Director, Nadine O’Connor, is a working supermum who has helped mums and dads alike.

Unlike The Guardian, Women’s Aid and other organisations, Fathers4Justice does not discriminate against people on the grounds of gender.

At face value, Freeman’s ignorance of Fathers4Justice is staggering, but then The Guardian trades in falsehoods and fake news.

Why let the truth get in the way of your ideology?

Nadine later took to Twitter to challenge Freeman, saying ‘it was an inconvenient truth that the majority of parents who deny contact are mums…stars like Kate Winslet who oppose parental equality should also be named…not all women wallow in the victim status people like you use as cover for your own prejudices.’

Worst still, Freeman’s claim that F4J were exploiting her two toddlers to promote F4J is equally outrageous. Given she gave permission for the photograph to be taken and shared on the Twittersphere (to promote a photographic exhibition ahead of International Women’s Day), it is arguable the only person doing the exploiting was Freeman herself.

In smearing and belittling the life-changing and life-saving work F4J does, Freeman not only insults the families we help and represent, but embodies the ideological struggle men face for equality.

She mocks, she spits and she breathes contempt, yet cannot see beyond her own ideology to the train of pain that may one day head down the line towards her family.

Meanwhile, her fatherphobic sugar daddy wages an ideological crusade against men they have demonised as deadbeats and predators for cheap political capital. We have become a nation of sperm banks, cashpoints and whipping boys.

Journos like Freeman tar and feather protesting dads fighting to see their kids, then laud feminist protestors like Pussy Riot and Femen in the next breath.

The hypocrisy is breath-taking.

She is a powerful journalist, using her position of authority to smear F4J, hiding behind the £200m protective firewall provided by lawyers in the Guardian Media Group, who previously threatened to sue F4J on behalf of Tory MP, Tim Loughton.

We considered suing Freeman for libel (See Cork Pro Choice, Mothers4Justice), but instead mum-of-two Nadine O’Connor offered to meet her to explain both sides of the story from a woman’s perspective.

100 years ago bigoted men said women couldn’t be trusted to have the right to vote.

What sort of equality is it when our political, liberal elite not only turns a blind eye to the abuse of men and children in barbaric family courts, but they are apologists for it.

They are complicit in our suffering.

That’s why we have a duty to call out abuse where we find it and name and shame those responsible, a campaign we will be stepping up in the coming months.

Mother’s Day is about honouring our mothers, but we must face the unpalatable reality that too many mums oppose parental equality and continue to deny their children access to their dads.

They have brought dishonour to motherhood, enabled by an ideologically driven, extreme feminist minority. What Dr Johnson called, ‘the dictatorship of the prevailing orthodoxy.’

The grimmest dictatorship of them all.

Unquestionably, we all love our mums.

But we don’t have to love or accept bigotry and hypocrisy.

Thank god then for real mums like Nadine O’Connor, who wants her son and daughter to be judged by the content of their character, not by their gender.

Because in the words of The Manics’, if you tolerate this, then your children will be next.