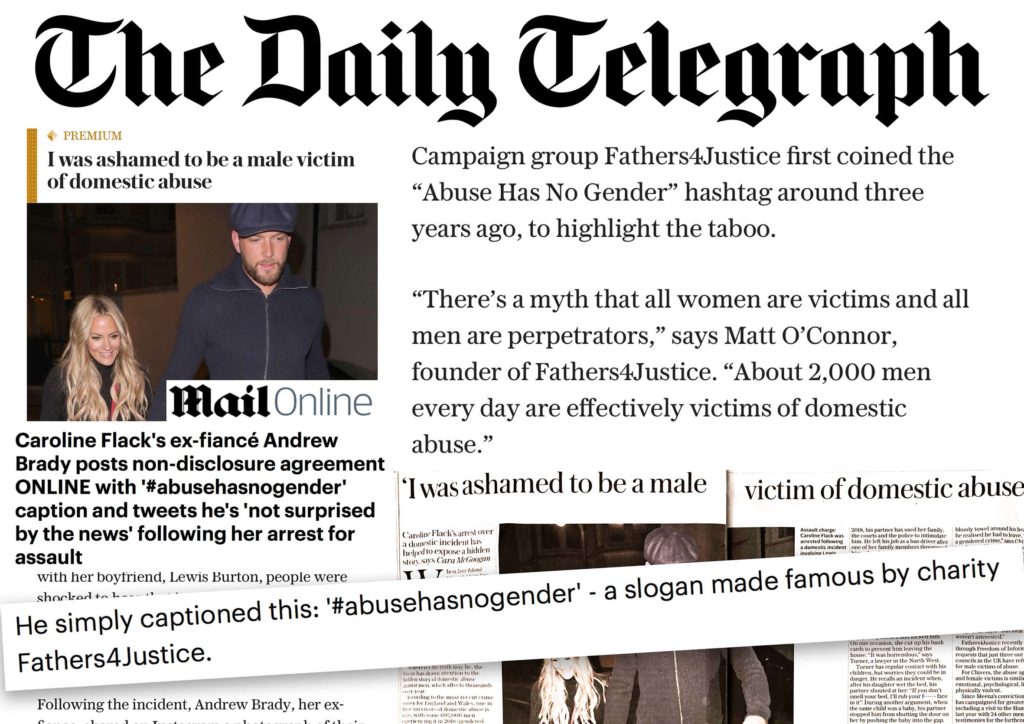 It followed Flack’s arrest for assaulting boyfriend Lewis Burton and recent claims by F4J on International Men’s Day that violence against men is ignored.

Said F4J founder Matt O’Connor, “There’s a myth that all women are victims and all men are perpetrators. According to the Crime Survey for England and Wales year ending March 2018, nearly 2,000 men every day are victims of domestic abuse and 1 in 3 victims are men.”

O’Connor said he is pleased that calls for Flack to step down from her role presenting Love Island have been heeded. “It would send a terrible message if she was retained in her role at this time,” he says. “We want ITV to show they treat allegations of domestic violence against men in the same way they would against women.”

“There’s a real stigma around it,” says O’Connor. “I know men who have been attacked and had their laptops smashed, but they’re terrified of reporting it in case they’re not believed – or are arrested themselves.

“I simply want to redress the balance and show abuse has no gender.”

F4J say a campaign featuring the Caroline Flack story is being planning.

Read the Daily Telegraph story; I was ashamed to be a male victim of domestic abuse https://www.telegraph.co.uk/family/life/ashamed-male-victim-domestic-abuse/

When Love Island presenter Caroline Flack was arrested last week following a domestic incident with her boyfriend, Lewis Burton, people were shocked to hear that it was she who had reportedly hit him. The slight 40-year-old has been charged with assaulting Burton, a 6ft 4in tennis player.

Following the incident, Andrew Brady, her ex-fiance, shared on Instagram a photograph of their non-disclosure agreement, with the caption: “#AbuseHasNoGender”.

Wherever the truth may lie, the fracas has drawn attention to the hidden story of domestic abuse against men, which affects thousands every year. According to the most recent crime survey for England and Wales, one in three survivors of domestic abuse in the UK are male, with some 695,000 men experiencing it in 2018 (gendered figures for 2019 aren’t yet available).

Campaign group Fathers4Justice first coined the “Abuse Has No Gender” hashtag around three years ago, to highlight the taboo.

“There’s a myth that all women are victims and all men are perpetrators,” says Matt O’Connor, founder of Fathers4Justice. “About 2,000 men every day are effectively victims of domestic abuse.”

O’Connor believes that Flack, who is due to appear in court on Monday, should be suspended from Love Island – a new “winter” series filmed in South Africa is scheduled to start in the new year – until the case is over. “It would send a terrible message if she was retained in her role at this time,” he says. “We want ITV to show they treat allegations of domestic violence against men in the same way they would against women.”

More than half a dozen male survivors of domestic abuse have shared their stories with the Telegraph. They paint a picture of shame, embarrassment and disbelief from the authorities – and suggest that police and family courts are more likely to believe their abusive ex-partners.

“There’s a real stigma around it,” says O’Connor. “I know men who have been attacked and had their laptops smashed, but they’re terrified of reporting it in case they’re not believed – or are arrested themselves.

“I simply want to redress the balance and show abuse has no gender.”

Every time Shaun Marshall* scrolls through old pictures of his children on his phone, he ends up in tears. The 33-year-old from Kent hasn’t seen his eldest two daughters since he walked out on his abusive partner 18 months ago. She had attacked and controlled him one too many times – he needed to get out.

“She tried to strangle me and shoved me against the kitchen side,” says Marshall. “When I tried to leave through the kitchen door, she scratched me up my arm. I went back with the police that evening to get some bits. I’ve never been back.”

Over the course of their relationship, which began in 2009, Marshall’s ex-partner had isolated him from friends, and been violent. She threatened him with knives and threw glass candle holders at him – “whatever was in reach”, he says. Even though he was injured on a number of occasions, he never went to hospital.

“I felt too ashamed to say my partner had done this to me,” he says. “It would make me feel less manly. So I just kept it to myself.”

Even after enduring nine years of abuse, the torment isn’t over for Marshall. Since he left home in July 2018, his partner has used her family, the courts and the police to intimidate him. He left his job as a bus driver after one of her family members threatened him when he was working. His ex-partner has since taken a non-molestation order out against him, claiming he abused her, and she is fighting to refuse him visitation rights.

“This will be my second Christmas without my children,” says Marshall. “It really pains me not to be able to see them or to give them presents.”

Richard Turner*, 36, tells a similar story. He finally left his abusive partner in 2016 after eight years of her being violent and controlling. There were countless times when she made him sleep in the car, or became so angry she punched and kicked him. On one occasion, she cut up his bank cards to prevent him from leaving the house. “It was horrendous,” says Turner, a lawyer in the North West.

Turner has regular contact with his children, but worries they could be in danger. He recalls an incident when, after his daughter wet the bed, his partner shouted at her: “If you don’t smell your bed, I’ll rub your f—— face in it”. During another argument, when the same child was a baby, Turner’s partner stopped him from shutting the door on her by pushing the baby into the gap.

However, his ex-partner has now accused him of being abusive, and has taken out a non-molestation order. In September, he sent her a WhatsApp message asking if she could send him a picture of their daughter on her first day of school; she complained to police. He now has two charges of using abusive language and breaking the order.

“The police force is biased,” says Turner, who has submitted a complaint to the Independent Police Complaints Commission. “People believe the female over the male every time, and that’s what the police are doing.” If he wins, he intends to sue the police for harassment.

Paul Chivers, 50, knows just how serious domestic abuse can become. His wife, Meena, left him in hospital after repeatedly hitting him with a hairdryer until his head split open. In 2015, she was convicted of committing grievous bodily harm and sentenced to 16 months in prison.

It was in A&E with a bloody towel around his head that he realised he had to leave. “It’s not a gendered crime,” says Chivers, a teacher and honorary patron of the Mankind Initiative. “But I found the whole system was against me as a male victim.”

In the days after he left his wife, Chivers yearned for the support of local agencies, such as Women’s Aid, but felt they all “closed the door” on him and his daughter, Tess, 15. He had to rely on family and friends to house them while he waited for Meena to be arrested so they could move back into the family home.

“At that point, your life is in turmoil and you need as much support as you can get,” he says. “But local agencies weren’t interested.”

Fathers4Justice recently discovered through Freedom of Information requests that just three out of 400 councils in the UK have refuge spaces for male victims of abuse.

For Chivers, the abuse waged against male and female victims is similar: it can be emotional, psychological, financial and physically violent. Since Meena’s conviction, Chivers has campaigned for greater awareness, including a visit to the Home Office last year with 24 other men who gave testimonies for the Domestic Abuse Act.

Marshall now has a new partner, with whom he has a seven-month-old daughter. Recently, he found himself in floods of tears when his baby was listening to the Frozen soundtrack, and ‘Let It Go’ came on. “That was my second daughter’s favourite song, and she would do a dance to it,” he says. “I hadn’t heard it play until then, and had to turn it off. It hurt too much.”

Despite the gulf that has separated him from his children, Marshall “definitely” believes he will be reunited with his children. “I don’t think either parent should use the kid as a weapon for their personal gain,” he adds.

Turner has been separated from his abusive ex for three years and is now happily engaged to a new woman, with another child on the way.

Chivers, meanwhile, still suffers from PTSD, and Tess, who is taking her year 11 mock exams, has sought counselling for anxiety and low self-esteem.

“Our lives are a lot better,” says Chivers, “but the mental scars are still there.”

*Some names have been changed

F4J say violence against men ‘is ignored’ ahead of International Men’s Day https://www.fathers-4-justice.org/2019/11/f4j-say-violence-men-ignored-ahead-international-mens-day/